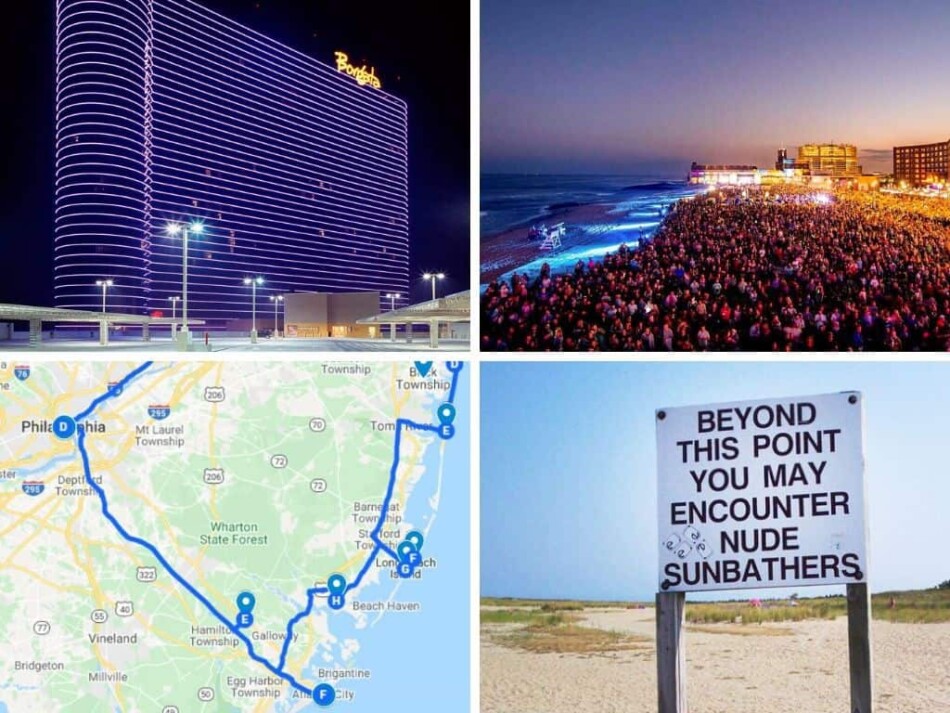 In addition, to it being a melting pot for culture, from Chinatown to Little Italy. As the hub of the east coast its the ideal launching pad for some epic road trips!

A road trip to Atlantic City will take you past some of the most charming coastal towns, beaches & a few crazy attractions! From the historic lighthouse at Long Beach island to the vibrant boardwalks of Point Pleasant & seaside heights (Jersey Shore) to even a Nudist beach  (Middletown)!

Me and my wife have taken this road trip twice so i’ve outlined two routes, one via the Atlantic coast and one via Philadelphia!

Dive into our Interactive Map Below!

User Guide: Use the plus and Minus buttons to Zoom in and Out of the attractions.

Many visitors choose to share this map on facebook and then use it on their road trip by hitting the link below.

How long is the drive from New York City to Atlantic City?

It’s 126 miles/203 km from Atlantic City to New York City, which takes about 2 -3 hours to drive, without stopping.

Of course there are some great places to stop along the way!

You  an drive the direct route around Garden State Parkway and just be aware of heavy traffic during the summer beach season!

You could rent a car in Manhattan, although rates at the airport can be cheaper. For more info check out: Ultimate Car Rental Travel Hacks!

Is there a Casino Bus to Atlantic City from New York?

Yes! If your on a Budget or don’t want to drive then the Bus is an easy and very affordable option.

Related Read: 45 BEST Things To Do in Atlantic City, NJ

How long does the Bus take to Atlantic city?

Your best option is Greyhound’s “Lucky Streak” service which departs from the Port Authority Bus Terminal.

The Bus will drop you off directly at a number of different Atlantic City Casinos including Atlantic city Bus Station.

Disembarking at a casino will often entitle those taking a round trip to FREE PLAN CASINO VOUCHERS!

The Return tickets are open and can be used to get back to NYC anytime.

The Bus ride down is really fun and upbeat with a positive vibe from those hoping to win big in Atlantic city!

Whereas, on the way back is full of a real mix of characters including those which lost big!

Is there a train from New York to Atlantic City?

There is a train but its NOT direct! It only makes sense if you plan on travelling to Philadelphia first before transferring onto the New Jersey Transit service to Atlantic City.

The New Jersey Transit Train leaves from Penn Station in Manhattan to 30th Street Station via Trenton on NJ transit.

How long does the train between New York and Atlantic city take?

Is it worth it?

Its more spacious and comfortable than the bus, with no traffic. However, the extra time, detour and cost (around $100) makes driving or bus a better option for most!

Tickets can be purchased from Amtrak or at Penn Station.

For our full guide on US Train travel check out: How to Travel Coast to Coast USA by Train for $232?

This is fun if your in a large group and can’t be bothered with car rental and driving! However, traffic will still be a factor.

If your really want the fastest and most extravagant way of travelling to Atlantic City.  Then “Get to the Chopperrrr” flights take around 45 mins. This is great if your after a real special experience birthday, honeymoon etc.

For prices and details check out this link HERE

Best Places to Stop between New York and Atlantic City?

Middletown is a curious place which offers everything from historic lighthouses and museums to a NUDIST BEACH!

Related Read: 50 BEST Things To Do in New Jersey

Asbury Park  is known for its musical heritage. Bruce Springsteen actually comes from the city! It also has the sixth best beach in New Jersey, according to a recent poll.

Stroll along the Asbury Park boardwalk where you will be sure to see some buskers!

Brick Township is located on the famous Jersey Shore! Great for families its home to many boardwalks with arcades, amusement parks, and even water parks boasting hundreds of rides and attractions!

Fun Fact: Both sunrise and sunset are visible over water from different parts on the Jersey Shore.

Seaside Heights is also on the Jersey shore and probably best know as the filming location for the popular Reality TV show “The Jersey Shore”.

The actual house where the filming took place is now a tourist attraction,  which serves food and offers tours of the house.

One fan of the show wrote: “

It was exactly as seen on the show! And we were able to see the “confessional room” as well along with other small parts of the house not aired or fully aired on the show!
One of the best nights I’ve had all summer long was going to the Jersey Shore House and experiencing it in-person! It was so dope!! If you get a chance, just do the tour! You won’t regret it!” – Nessa.
Fun Fact: You can even rent the whole Jersey shore house for a whopping $3000/night!

Surf City is a tiny, peaceful place to visit. Its great if you just want to relax as it has NO boardwalk!

Long beach island is 18 miles long and know for

Mystic Island is mostly residential but the surrounding areas have historic sites, beaches and many outdoor areas.

Lake Absegami in Bass River State Forest  is eight miles northwest of Mystic Island, it offers a beach suitable for swimming, canoe and kayak rentals. There is also eight easy hiking trails which wind through the state park. Be sure you have some high quality Hiking Boots

Edison is a little town know for the famous Menlo Park where the great inventor Thomas Edison had his laboratory! You should also check out, Little India a cultural hub of great Indian cuisine, markets and authentic Indian shops.

Philadelphia Museum of Art – Run up those famous steps from Rocky!!

Philadelphia is famed that Iconic scene in the Rocky movies where he runs up the steps of the Philadelphia Museum of Art! This is a great area for a selfie, “Yo Adrian, we did it”.

After you get to top, be sure to head inside the Museum of Art, which is one of the best in the U.S.A. Here you will find works by Van Gogh, Picasso and many more!

There is also monuments and structures from around the world such as the 16th-century Indian temple hall, a Japanese teahouse and even a 17th-century Chinese Palace hall!

This is a MUST SEE attraction for all Americans! Just opposite Independence Hall, you will discover the Liberty Bell Center located in Independence National Historical Park.

Protected in Glass gazebo, this historical Bell weighs over 2000 pounds and was previously mounted on Independence Hall.

This was used to mark events of great significance such as the first public reading of the Declaration of Independence.

If you want to delve deeper into the history of the USA. Check out Independence Hall. Where the Declaration of Independence & American Constitution were debated & signed!

Philadelphia is a melting pot for some epic foods such as the mouth watering Philly cheese steak!

One of best places to sample the best of Philly is at Reading Terminal Market  a Food Market which contains over 80 different food vendors!

It’s the perfect place to try some local Philly foods and baked goods. In addition, to a variety of international foods such as Greek, Mexican, Indian and even Thai!

Reading Terminal Market is detailed in our posts:

Egg Harbor city is popular with its Wineries and Golf Resorts! Renault Winery is ideal for couples romantic weekend.

Wohoooo you’ve made it to Atlantic City! Atlantic city has some of the best, biggest and most famous…just behind Las Vegas.

Fun Fact: As the second city ever to Legalize casinos, in the U.S.A, New Jersey passed the laws in 1976 and opened it’s first Casino in 1978!

Borgata, has only been around for around 16 years now, so its a relative newbie compared to most other Casinos. However, the mighty Casino is a true gem of Atlantic City.

From it’s marble covered lobby, the gambling floors are superb. However, the real highlight is the rooms, luxury, space and comfort throughout they are truly the best in Atlantic city…even the shower is Marble cladded!

Two of my favourite places to eat in Atlantic city include:

Located at the Borgota, Angeline is the first fully Italian restaurant from Michael Symon, the “Iron Chef” winner and co host on ABC’s cooking shows “The chew”.

From homemade pastas & lasganes (made from the chefs mothers recipe!) to Aracini amore!

This is celebrity chef Bobby Flays high end steakhouse! It can be pricey but it’s a meat eaters dream!

This historic venue was opened back in 1986, but still its a secret to many!

Be sure to have a good camera ready for the table experience, where the owner Joe Lautato makes the fresh mozzarella right from the curd! It is then sliced well still warm and plated!

Where to Stay in Atlantic City??

For a great list of our recommended places to stay in Atlantic city, follow the link HERE

For a full guide on US casinos and it’s crazy laws check out: Why Isn’t Gambling legal in all States? Casino Guide! 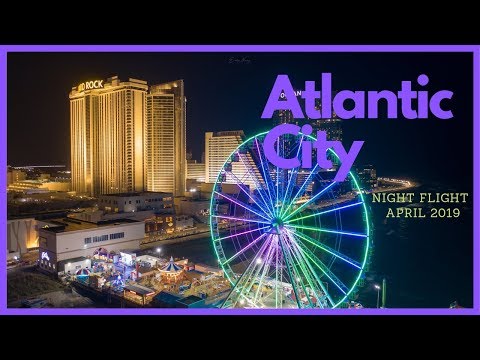 Atlantic City is one of America’s most popular destinations. Known…

50 BEST Things To Do in New Jersey (There's Something For Everyone!)

New Jersey often gets a bad rap for how reality…

New Jersey might be a small state, but it has…

New York is such a beautiful state that it is…

St Augustine in Florida is a quaint, magical city which…

Prince Edward Island (PEI) is the smallest of the Canadian…