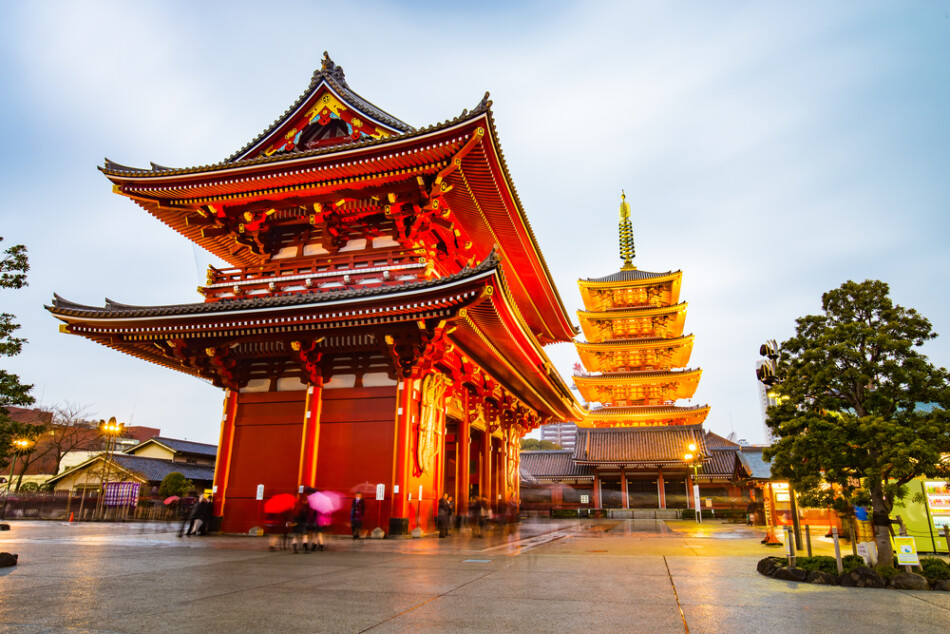 Tokyo is understandably the capital city of Tokyo and it’s known across the world as a great tourist destination. The bright lights, beautiful blossoms, and delicious food attract over 10 million travelers per year. So, what is the best time to visit Tokyo?

The best time to visit Tokyo is from March through June before it becomes too crowded. July and August are two of the worst months to visit Tokyo because of the extreme heat and crowds of tourists. You can save money if you go to Tokyo between January and March when tourism is down, and hotel rates cost less.

Tokyo draws crowds throughout the year, but they thin out significantly on January 1st. Avoid Tokyo during the summer if you want to avoid crowds. Follow along as we explore the best time to visit Tokyo and the most important events throughout the year.

Late summer is the worst time to visit Tokyo because of the crowds and excessive heat. July and August are the hottest months of the year in Tokyo, and the city becomes quite crowded. Temperatures can soar to 90 degrees during July and August with plenty of rain.

You can expect plenty of rain during the late summer in Tokyo with up to 10 wet days out of the month. It won’t drop below 73 degrees when you visit Tokyo in July or August. The heat combined with the millions of tourists can make it uncomfortable to navigate Tokyo during late summer.

Cheapest Time to go to Tokyo

The cheapest time to go to Tokyo is from January through March when tourism is down. Tourism dies down significantly after the special holiday events in December. Tourism doesn’t pick back up again until the warm weather returns towards the end of March in Tokyo.

You can expect to spend $1,000 or more when you visit Tokyo between January and March. Comparatively, you will spend at least $1,300 on the low end for a roundtrip ticket to Tokyo in the summer. Hotel rooms cost an average of $121 per night from January to March, but it varies based on where you stay.

High-end hotels cost over $400 per night during late winter in Tokyo. However, that is standard for luxury hotels no matter what time of year you visit. You can save the most money on your flight and hotel room if you book your trip to Tokyo 3-4 months before your vacation.

What Time of Year is the Best Weather in Tokyo?

Temperatures fluctuate between 36 and 50 degrees Fahrenheit each January in Tokyo. It only rains for 2-3 days out of the month so it’s a great time to explore the city. You won’t see the gorgeous blossoms that Tokyo is known for, but you can still enjoy the beautiful lights and sights in the city.

Despite the cold weather, January is the best time to visit Disneyland in Tokyo. Disneyland is fairly vacant throughout January because of the cooler temperatures and lack of tourism. The special events during the fall and early winter come to a stop in January so you won’t have to worry about crowds at Disneyland.

Gear heads can enjoy the Auto Parts & Processing Expo to get ahead of the latest automotive innovations. Tourism is down in Tokyo during January and there aren’t many special events besides conventions.

The cold weather slowly starts to fade towards the end of the month each February in Tokyo. You will still need to bring warm clothes, however. Temperatures fluctuate between 37 and 51 degrees throughout February.

Check out the annual Inukko Festival if you love dogs and want to experience Japanese culture. The Bean-Scattering Festival in Tokyo is another authentic staple in Tokyo’s culture each February. Low-key events like InterAqua and the Private Label Trade Show Japan are worth checking out.

It continues to warm each March in Tokyo, especially towards the end of the month. Temperatures fluctuate between 41 and 56 degrees throughout March. You can expect it to rain for up to 8 days out of the month during March in Tokyo.

Check out the Sumida Park Cherry Blossom Festival to celebrate some of the most beautiful local plants. Tokyo even hosts a fun and vibrant St. Patrick’s Day Parade each year in March.

Check out Kurayami Matsuri, also known as the Darkness Festival, to experience authentic Japanese culture. Get some ideas for your closet at Fashion World Tokyo and see the latest trends for yourself. Experience the surrounding wildlife and greenery at the Meiji Jingu Grand Spring Festival each April in Tokyo.

You can expect temperatures between 50 and 66 degrees when you go to Tokyo in April. It rains for up to 9 days each April in Tokyo so make sure to pack your bag accordingly.

May: Best Time for Special Events

Tokyo gets warmer throughout May during the transition from spring to early summer. Temperatures fluctuate between 59 and 74 degrees on average during May in Tokyo.

Celebrate Tokyo’s history at the Sanja Festival which happens each May and honors a tradition dating to the 7th century. Akabane Baka Matsuri involves local businesses and flea markets and concludes with a fun parade. Festive events like Ome Grand Festival and Omiya Bonsai Festival to experience Tokyo like a local.

June is a great time to be outside in Tokyo with temperatures between 66 and 78 degrees throughout the month. With that said, June is the second rainiest month of the year in Tokyo behind September. Make sure to check the weather before you venture out in the city as it rains for 11 days on average each June.

There is no shortage of fun events to attend during June in Tokyo. The Torikoe Festival and Live Entertainment Expo draw massive crowds each June. Check out the Tokyo International Art Fair to see unique creations from all over the world.

July: Best Time to Visit in the Summer

July is a festive time in Tokyo with special events throughout the month. Mingle with locals and learn about Japanese culture at the Ueno Summer Festival in July. Events like Yunnan Festival and Cosmic Factory Festival are fun for tourists and locals alike.

Temperatures fluctuate between 73 and 85 degrees throughout the month. It rains for up to 10 days each July in Tokyo.

Enjoy summer while it still lasts at the Hakone Ashinoko Summer Festival in August. The Fussa Tanabata Festival is another chance to enjoy the heat before it goes away. Otherwise, August is a fairly quiet month in Tokyo and temperatures fluctuate between 75 and 88 degrees.\

September is the rainiest month of the year in Tokyo on average. You can expect it to rain for up to 12 days each September in Tokyo and it can even rain more than that. Temperatures cool down in September and typically range between 69 and 81 degrees.

Luckily, there are still many fun events throughout September such as the Local Green Festival. Check out the HK Atelier at Tokyo International Gift Show to get style ideas for your home. Musicians can’t miss the International Conference on Classical Music during a September trip to Tokyo.

Seafood lovers can’t miss the annual Meguro Sanma Matsuri event each September. You can taste fresh fish and participate in an important staple of Japanese culture.

October brings mild and comfortable temperatures each year in Tokyo. You can expect temperatures between 58 and 71 degrees when you visit Tokyo in October.

The Koenji Festival is a chance to explore several local businesses in Tokyo and sample authentic goods. Add to your antique collection at the Hanazono Shrine Antique Market each October in Tokyo. Visit the Onjuku Ise-Ebi Festival for some of the best seafood in the world.

Enjoy cinema from around the world at the Tokyo International Film Festival. The Kawagoe International Exchange Festival is another huge draw each November in Tokyo. You can enjoy Japanese staples and food from 7 other countries at this event and it’s worth your time.

Tokyo continues to get cooler throughout December. You can expect temperatures between 39 and 54 degrees each December in Tokyo.

It won’t be hard to find exciting New Year’s Eve celebrations throughout Tokyo each December. Music lovers will appreciate the Tokyo Symphony Orchestra and an unforgettable night. Immerse yourself in the local culture at the annual Oji Fox Parade on New Year’s Eve in Tokyo.

Spring is the best time to visit Tokyo with family because of the weather and special events. Tourist attractions in Tokyo welcome hundreds of thousands of tourists in the spring and early summer. It can get quite crowded as it gets into late spring, so it’s best to go early in the season.

Families can get the full Tokyo experience in Tokyo between the beautiful blossoms and vibrant markets. You can experience the metropolitan aspects of Tokyo as well as the beautiful wildlife that kids and adults can appreciate equally. Disneyland is a huge tourist attraction during the spring as the temperatures begin to warm up.

You can expect highs between 56 and 74 degrees during the spring in Tokyo depending on when you visit. Temperatures can still drop as low as 40 degrees in early spring when you visit Tokyo in the early spring.

January is the best time to visit Tokyo to avoid crowds. Crowds thin out after the holiday and New Year’s celebrations at the end of December. The cold weather throughout January in Tokyo makes it less appealing for the average tourist.

Luckily, it doesn’t generally get colder than 35 degrees on average during January in Tokyo. This may keep many tourists away, but it’s not cold enough to ruin your trip. The lack of crowds is reflected in airline costs and hotel rates.

Take the chance to visit Disneyland when you visit Tokyo in January. You will be able to avoid crowds and won’t have to wait in line like would in the spring or summer.

South Korea is everything in one place. Great food, scenic…

The 20 Best Adult-Only Resorts in Hawaii

Hawaii is defined by gorgeous volcanoes and alluring beaches. The…

One of the most overlooked European destinations is Lisbon, located…

New Orleans is among the most popular vacation destinations in…

California is one of the top tourist destinations in the…

The Caribbean is the perfect place for a tropical beach…

Maine is known for lobster, harbors, whales, and small towns…