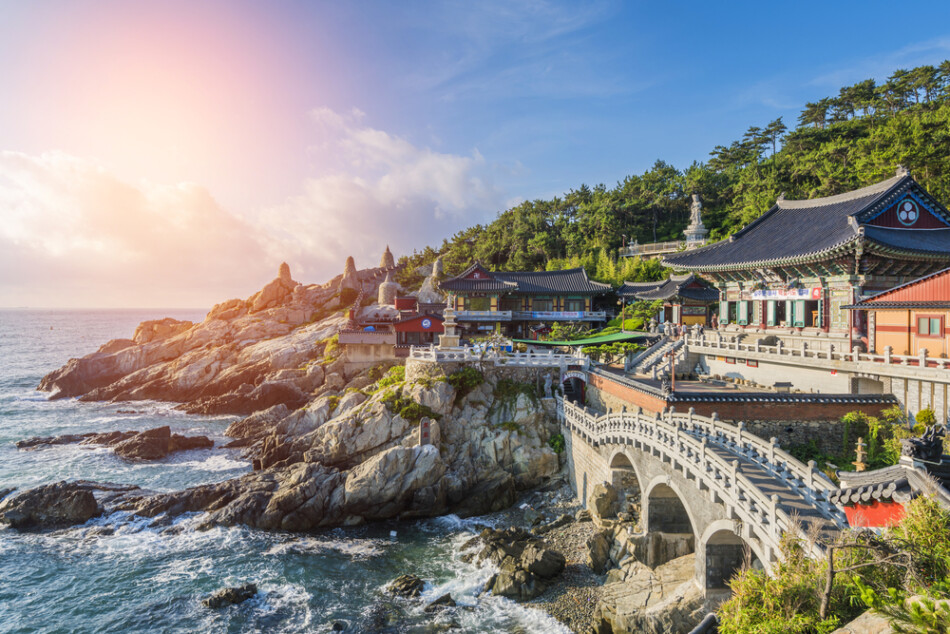 South Korea is everything in one place. Great food, scenic sights, wonderful culture, and friendly people to match your vacation worthwhile. South Korea should be added to your bucket list if you’re a lover of adventure. It’s almost difficult to decide when to visit the beautiful country.

The best time to visit South Korea is between March and May. What’s more, temperatures linger around 50 to 73°F with significantly less rainfall. Noticeably, the flowers are in full bloom. You can spot Asia’s finest cherry blossoms during this time. You can also visit between September and November for up to 40% off travel and accommodations.

The country is a unique blend of technology, classic and modern architecture, and everything in between. However, you shouldn’t limit your trip to the cities. Make your vacation colorful by exploring the countryside and mountains.

When Should You Not Go To South Korea

The least favorable time to visit South Korea is between June to August. It’s called the monsoon season. The temperature high hit 85°F. It is quite humid on most days. Coincidentally, it’s the busiest time of the year. Tourists troop in their thousands to visit the country. More so, hotel prices tend to skyrocket during this time. Other services are also at a premium.

Most of the major rainfall occurs in late July and August. The typhoons that hit China, Taiwan, and Japan do not affect South Korea this season. This is because South Korea is nestled between those countries.

However, if you’re not bothered by the heat, you can visit during this time. Ensure you book in advance for your accommodation.

The cheapest time to visit South Korea is between early September and November. It’s just after summer, and the crowds have withered down. Temperatures drop to 67°F, and frigid winds sweep the country on most days.

Most of the public attractions offer discounts on rates. Moreover, you also spend less time in lines before entering indoor or outdoor spaces. Hotel prices also drop during this as a result of low patronage.

Despite the cold, several events and activities are lined up in South Korea. We are going to explore them in the article.

Monthly Breakdown of the Weather in South Korea

Below is a monthly guide on what to expect throughout the year in South Korea. We also explored some of the key events lined up.

January: Coldest Month of the Year

January is the coldest month of the year in South Korea. It’s the heart of the winter season. Temperature highs drop to 34.9°F and low 21°F. Noticeably, you will experience icy winds across the cities and countryside. However, there are several instances of sunny skies on most days.

You should pack warm clothes, jackets, and boots if you travel to South Korea this month. There are several events lined up in January. Seollal (Lunar New Year) is one of the biggest holidays in the country. It’s a 3-day celebratory event starting from the 1st.

You can join Koreans to dress their best and feast on dduk guk (rice-cake soup) and mandu guk (dumpling soup). All the palaces in Seoul also organize special events.

The Hwacheon Mountain Trout Festival also happens in January. It’s a festival celebrating the mountain trout known as the Queen of the Valleys. Join thousands of people in Gangwon-do and Gyeonggi-do to enjoy a wide selection of winter sports.

February comes with a mixture of humid and frigid weather. The average temperature highs increase to 39.4°F, and lows hit 24.6°F. So, you are bound to expect more icy winds throughout the month. However, you can also expect some sunny days on most days.

If you’re dropping in this month, you should pack warm clothes and jackets. You can also pack light clothes to explore the country on sunny days.

One of the major events in February includes the Inje Ice Fishing Festival. It occurs every winter when Soyang Lake has frozen over. You can take a trip to the mountain village in the Seoraksan region. You can play ice soccer, watch a dog sled competition, and enjoy a meal of fresh smelt.

Winter is still noticeable during the first few days of March in South Korea. However, it makes way more warm and humid days for the rest of the month. The cold snaps don’t linger long as they usher in the cherry blossoms. This is also one of the best months to visit South Korea.

The average temperature highs rise to 50.4°F. So, you should pack more light clothes in preparation for summer. You can engage in more outdoor activities. They include hiking trips, sightseeing, and street photography.

March is a perfect time to travel around the country and partake in special events. They include the Gwangyang International Maehwa Festival. You get to experience the sweet fragrance of the apricot blossoms and taste Korean seafood.

The Bullfighting Festival also happens this month in Cheongdo, located south of Daegu. You can hop on a rodeo and watch a calf beauty contest.

April officially welcomes cherry blossoms throughout the country. Temperature highs hit 63.7°F, so there will be a massive supply of sunshine for most of April. However, you should prepare for a couple of light showers in a few days.

However, you might face the possibility of yellow dust storms in April. These storms sweep from the Gobi Desert and spread to a chunk of East Asia.

April is a month of several festivals. One notable event is the Hi Seoul Festival. It celebrates the rich history and tradition of the capital city. This week-long event takes place in downtown Seoul. It features a lighted boat parade, classical music, and rock concerts.

The Icheon Ceramic Festival also occurs in April. Here, you can experience the history and mastery of Korean pottery. You can even purchase handmade ceramics from original artists.

The spring season is in full swing in May. The flowers blooming makes the entire country colorful and bright. South Korea is beautiful during this time. Temperature highs continue to increase, hitting 73°F.

Noticeably, May is one of the driest months before the monsoon season kicks in. You should pack summer clothes when traveling into the country this month.

You can get involved in a wide range of outdoor activities. They include hiking in Hallasan, sightseeing in Bukhansan, and tea-sampling at Joellanam-do.

Significant events include the Lotus Lantern Festival. It’s a special occasion that coincides with Buddha’s birthday anniversary. The opening ceremony starts at Dongdaemun Stadium and proceeds to the Han River with lanterns. Similar events also take place at the Jogyesa Temple in Seoul.

June: Start of the Monsoon Season

June is the start of summer in South Korea. The temperature continues to rise throughout the month, hitting 80.4°F. Which makes it pleasant to travel. You should expect sunny and clear skies for most of the month. June is one of the busiest months of the year.

Ditch most of your winter clothes for summer shorts and dresses. The weather is just perfect for hiking around the peninsula. You can visit the scenic beaches in Seoul, Busan, Jeju-si, Gangneung-si, Seogwipo-si, and Incheon.

One of such events is the Muju Firefly Festival. It’s the only place where fireflies are located. The event includes taekwondo demonstrations and dances. You can also head over to Gangneung for the Dano Festival. It features folk performances unique to the region.

July is neck-deep into the summer season. Temperature rise to 83.8°F on most days. Expect clear and bright skies for most of the month. However, the weather can be uncontrollably humid.

July is also one of the wettest months of the year in South Korea. Heavy downpours occur in the middle of the month, brought on by the East Asian Monsoon. This month also marks the beginning of the typhoon season.

It’s essential to pack warm and light clothes if you’re traveling to South Korea. One notable event that blends with the weather is the Boryeong Mud Festival. Don’t go there if you’re not ready to roll in the mud. Activities include mud wrestling and mudslides.

You should pack light clothes if you’re visiting this week. If you enjoy the weather, you can hit the beaches. However, you can stick with indoor attractions if the weather is too hot. You can visit the museums, attend indoor performances, and remain in your hotel room.

Noticeably, the Busan International Rock Festival is one of the biggest events in August. It’s a free, open-air concert that attracts over 15,000 spectators. Attractions include live performances from local and international artists at Dadaepo Beach.

The typhoons and monsoons slowly dissipate in September. Temperature highs drop to 78.1°F, giving more comfort to exploring the country. You will experience humid and warm days but also a few instances of rainfall.

Events include the Harvest Moon Festival (Chuseok), the biggest holiday in the country. Also called Korean Thanksgiving, this festival celebrates the harvest season. The actions take place all over the country. Tourists can attend the events held at the palaces or the National Folk Museum in Seoul.

Autumn is in the air in October. The temperatures lower to 67.5°F. However, October is considerably drier than most of the preceding months. You can expect sunshine on most days of the month.

October is the perfect time to visit national parks. You can visit the parks at Hallasan, Bukhansan, or Seoraksan and explore their grounds.

Events include the Jagalchi Festival. It’s South Korea’s biggest seafood festival. You can also partake in the Icheon Rice Cultural Festival. It’s a celebration of the country’s agriculture. It’s being organized at the Icheon Seolbong Park.

The chills are back in November with autumn. Everywhere you turn, scenic colors fill the air. Temperatures drop to 52.7°F, and you’re bound to experience icy winds on most days. Towards the end of the month, the leaves start to fall off.

Despite the cold, you can explore most of South Korea. You can enjoy sightseeing and hiking at the national parks.

Events include the Gwangju Kimchi Festival. It’s a celebration of agriculture from the plains of Icheon. It’s going to be held at the Icheon Seolbong Park.

This month marks the beginning of the winter season in South Korea. Temperatures drop to 39.6°F. The weather is completely frigid, with less room for sunshine. Traveling to South Korea isn’t a bad idea, as there are serious activities you can participate in.

You can head to the ski resorts of Gangwon-do, watch, or partake in the activities. One of the major events in the country is the Pyeongchang Trout Festival. You’d get to test your fishing abilities or partake in sledding and ATVing.

Year after year South Korea has grown more popular, both…

Tokyo is understandably the capital city of Tokyo and it’s…

China is a popular travel destination with its ancient history…

The Hudson Valley is a charming and beautiful place to…

Vrbo is one of the most popular sites for travelers…

10 Best Indoor Water Parks in Illinois (Fun For All Ages!)

Illinois is an excellent state for residents and tourists alike,…

If you’re looking for a beautiful, serene getaway, look no…

Most pet owners think of their furry friends as part…

Monument Valley has one of the most recognizable landscapes in…