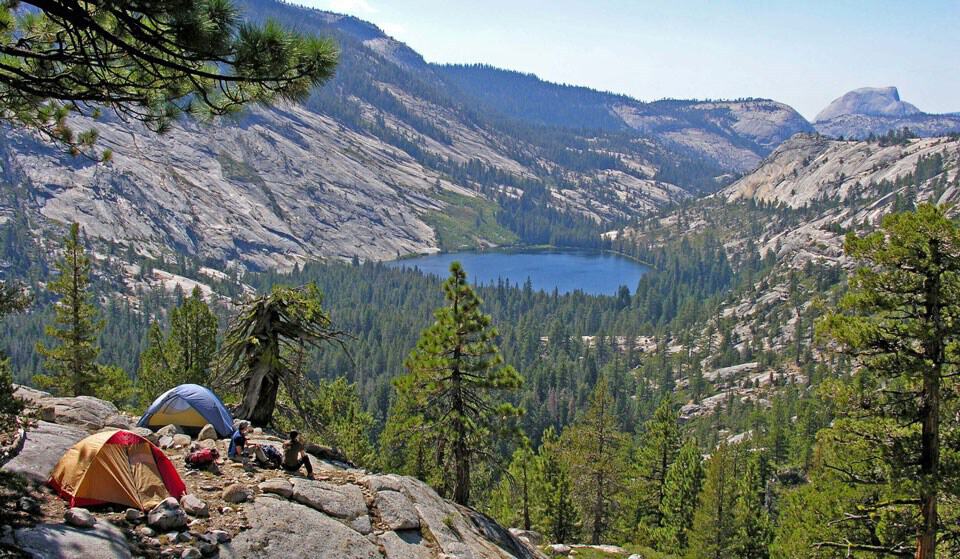 The largest U.S National park is Wrangell-St. Elias National Park and Preserve in Alaska which spans a massive 13.2 million acres! Whereas the smallest is Thaddeus Kosciuszko National Memorial, Pennsylvania, which is just 0.02 acres.

Each of these you could spend a lifetime adventuring through the vast wilderness, but to make things easier for you here at Town & Tourist we have put together an EPIC west Coast National Parks Road Trip!

This is a simple route with maps & directions, to follow along. The epic road trip will take you to the best national parks in the west, which can easily be completed in a single vacation!

If you plan on traveling to alot of National Parks then I suggest purchasing a “America the Beautiful Pass” which renews annual for $80. This pass will get you into every national parks and also into any federal lands which charge fees.

Arches National Park is located just north of Moab in Utah. The park has over 2000 naturally formed standstone arches, in a variety of reddish hues.

Many draw resemblances in color of the Arches National Park to the surface of Mars! But you don’t have to travel 54.6 million Km to see them as the park Borders with the Colorado river in the south.  This is an epic location for hiking, camping & star gazing.

Double Arch is a unique pair of giant arches in the park.

This is the longest arch in Arches National Park and resembles a bridge.

(This is a pretty easy 0.9m hike great for the whole family. Although it’s not easy to photograph due the many rocks surrounding)

A seemingly gravity defying rock balancing high in the sky. This is a easy 0.3 mile walk into the area and around the base of the rock where you can achieve suitable views.

Devils Garden is a spiked wonder of rock fins which look as though they have risen from the ground. The area includes many hiking trails, an ampitheatre and even a campground.

In the 1860s, Mormon pioneers settled in area and named it Zion, a bible reference meaning the city of god! Located in south Utah, Zion National park is famed for it’s steep red cliffs.

For more moderate weather head to Zion National Park during the Spring and fall. Popular months include, April, May, September & October which offer warm sunny weather with average temperatures between 60-90’F.

Can you drive through Zion National Park?

Yes! Drive through the Zion Mount Carmel highway which is open to tourists between (March- Octobers end). The drive takes just under 1 hour and is a bucket list experience.

Zion and Bryce Canyon National Parks both charge $35 for a 7 day pass with a vehicle. If you just take a drive from Capitol Reef National Park is $15.

How long should I spend at Zion National Park?

At Town & Tourist, we suggest you allow between 4-7 days if you are a avid hiker, as the challenging hikes will definitely keep you busy!

If you have just one day, then I suggest either a tour or this Epic itinerary.

Head to Bryce Canyon Before?

There is just 50 miles between Zion National park & Bryce Canyon. However, if you drive on the US-89 route it ends up being approximately 120 miles! This takes around 3.5hours , many say Bryce offers more scenic views, so I suggest heading here first then taking a drive through Zion National Park.

With over 6.38 million visitors in 2018, Grand Canyon National Park is the MOST popular National Park in the U.S.A. Of course, the this amazing popularity can make the experience of visiting the grand canyon a little less authentic so here are a few tips.

The North Rim of the Grand Canyon National Park is much less crowded/touristic and the views are incredible! However, access can be difficult no matter which direction you are coming from & its only open for part of the year.

(North Rim roads are closed to vehicles between December 1st and May 15th, and no visitor services are available. ) NPS

Highlights of the North Rim:

If you really fancy exploring the South Rim of the Grand Canyon, I suggest doing it in a more unique way check out:

Hot Air Balloon Ride over the Grand Canyon? 5 Golden reasons to try it!

Death Valley had the highest temperature ever recorded in North America of 134 degrees Fahrenheit (56.7 degrees Celsius), which occurred in 1913 at Greenland Ranch. Thus the best time to visit Death Valley National Park is between mid-October and mid-May, which will ensure you won’t get cooked alive!

(Composed of sediments of Furnace Creek Lake, which dried up 5 million years ago)

General Sherman is definitely a must see, for any visit to Sequoia National Park, at a height of 84m and weight of 1.9 million kg!

You should also check out, Crystal Cave one of 240 known caves in Sequoia National Park it features many eye catching rock formations and underground streams!

Fun Fact:  Crystal Cave is around 50 degrees inside no matter what the temperature is outside!

The best time to visit Sequoia National Park is between June and August. This is when the weather is most stable.

However, the park is open 24/7 all year round but it can be challenging during the winter season when snow can cause less minute re routes. During this season it’s recommend you use snow chains/tires and check weather updates before visiting.

Yosemite National Park is a real west coast highlight, located in the Sierra Nevada Mountains, it is best known for it’s massive sequoia trees and the granite cliffs of El Captain & half dome! Head up to the famed cliffs and you will find an incredible glacier valley with majestic waterfalls.

This is a great place for some challenging hikes, adrenaline pumping rock climbs and treks through the backcountry!

Fun Fact: Lyell is the tallest peak in the Park (and all of Tuolumne County) at over at 13,100 feet.

Does Yosemite have Mountain Lions??

Mountain lions otherwise known as  cougars, pumas or panthers, roam Yosemite’s mountains and valleys. There is also between 300-500 black bears, Mule deers and Bighorn Sheep which can be dangerous.  According to National Park Service, injuries/attacks by black bears Attacks are rare.

To drive through Yosemite National Park it will take around 5 to 6 hours if you drive at a relaxed pace and stop a couple of times. If you wish to head to Glacier Point that will take another hour.  The most popular scenic drive is along the Tioga Road, a 39-mile (62 km) drive from Crane Flat to Tioga Pass.

Yosemite can be a dangerous place, even in ideal conditions. From accidents & falls to animal encounters. In terms of driving a group of teenage hikers were driving from Yosemite to Marin County when their car came off the road & crashed…killing one of them! So be careful.

The best time to visit Yosemite are between May and September. This is  when the park is accessible but not overly crowded.  In the winter many roads and trails in Yosemite due to snow.

How long should I visit Yosemite for?

Yosemite can be explored in one day check out our itinerary.

(This are must see highlights which you can stop off at as you drive through the park).  A weekend is ideal Yosemite and three days is perfect to see all the sights.

How much does it cost to enter Yosemite National Park?

A Yosemite National park pass costs $30/vehicle, which is valid for 7 days.  If you plan on visiting regularly you can purchase a $60 Yosemite pass for unlimited visits in 12 months.

The summit at Lassen Peak is a 10,457 foot high active volcano. It last erupted in 1917 and was the largest ever volcanic eruption in North America up until 1980 when Mount St Helens erupted!

On the hikes up to the peak, you will walk through many animal habitats and have a chance to catch glimpses of the over 300 species of wildlife which live in the area.  From Black bears, to mule deer, woodpeckers, finches, bats and golden squirrels!

At the peak you will find epic panoramic views of the area, the perfect place for some wildlife watching.

All the features are relatively densely packed compared to Yellowstone and can be easily accessed from paved roads! Interested in More volcano national parks check out: Top 10 Volcanoes in Hawaii

Popular activities here include hikes along the Rim, Camping  and cross country skiing or snowshoeing during the winter. Boat tours are also a popular activity for many.

Can you swim at Crater Lake National Park?

Yes you can, but there is only when place which is safe & legal to do so. That is at the Cleetwood Cove trail which is open mid to late June.

Why is Crater Lake such an Incredible Blue??

The magnificent, bold blue of Crater Lake is caused by the sunlights rays. It’s rays of Longer wavelength are absorbed by the deep water and it’s shorter rays are reflected, creating an intense blue hue.

The best time to visit Crater Lake National Park is in the summer, between July, August and September. This is the time of year when the parks trails, roads and visitor facilities are open.

As we drive further up the north west we enter the Olympic National Park. One of the most diverse in the United States. Here you can find everything from glacier clad mountains such as Mt Olympus to vast expanses of wilderness, rainforests and even secluded beaches!

Popular hiking & climbing areas head through the rainforests and along the pacific coast. If you can only visit one rainforest, be sure to explore Hoh Rain Forest.

When is the best time to visit Olympic National Park?

The best time of year to visit Olympic National Park is during the spring and summer. The spring is great for wildlife spotting while the summer is ideal for activities.

We’ve left the biggest till last at 14,410 feet above Sea level Mount Rainier is one the tallest peaks in the United States...it is also an ACTIVE volcano.  Mount Rainier National Park offers the most glaciated peak in Contiguous U.S.A. In addition to wildflower meadows, five meandering rivers, ancient forests and an abundance of wildlife.

The best time to visit Mount Rainier national park is between July and August, when the wildflowers transform the sub alpine meadows!

How much does Mount Rainer National Park Cost?

Mount Rainer costs $30 per vehicle or $25 for each visitor aged over 16 on motorcycle. For individuals entering on bicycle, horseback or on foot the cost is $15 per person.

Ultimate National Park Road Trip – Use the Map above to follow the great U.S National Parks on the West coast. Simply share to your facebook using the link at the top and then open the maps from there.

If your a webmaster, feel free to embed this map into your website to help your readers. Just be sure to credit us at: www.townandtourist.com/attraction/west-national-parks-usa/

Hmm, they are cheaper but what about everything else, find out by clicking the link:

21 Unique Camping Destinations! Near Me! | U.S.A

National Millennium Trails: GUIDE to all 16!!