Strange things at Airport Security is a common find, for… 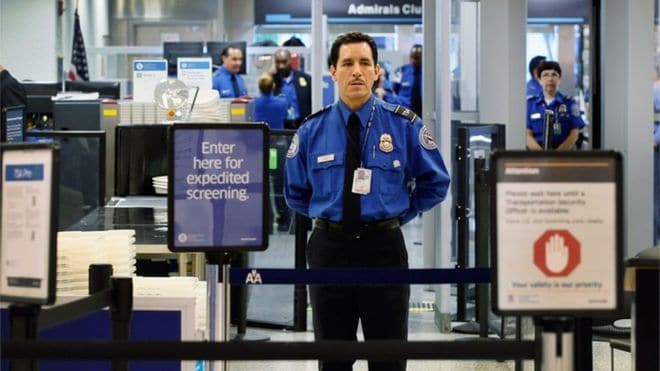 Strange things at Airport Security is a common find, for people like the TSA  and other Airport Security teams around the world. Airports can be a busy place, lots of people, luggage and cases moving around all over the place! For for most people forgetting to take out their liquids can be quite an embarrassment…but for other people thats just child’s play!  For your enjoyment here are the….

Thats right, a fish definitely out of water! Not just one fish though over 163 types of Marine tropical fish. He hoped to fill up a large aquarium. Thankfully those little Nemo’s were handed over to the U.S Fish and Wildlife Service!

As crazy as it sounds, this viking god was flying through Burlington International Airport in Vermont back in 2014! Who knows why??

It has to be said though it wasn’t a large metal mallet but a wooden one, so he must have been just practicing!  The TSA confiscated the item, as sledgehammers and mallets can be used as bludgeons and are prohibited as carry-ons. However, they can be checked in! So Thor will have no problem in the future!

I know that recirculated air on planes is bad but wow! There is no official rule that Gas masks are not aloud, however as this particular one looked like something to be used by a revolutionary mercenary it was taken of the passenger at Miami International Airport!

The bullets were actually replicas, but due to the similarities the TSA took a hard stance to avoid causing panic!I’ve got Banes Christmas present sorted!

So back in 1800’s it was considered by some quite deadly to leave their spouses open to controlling their desires when they were away! So whats the solution? A Steel Chastity Belt, this is attached around the waist of the user or ‘victim” to prevent sexual intercourse and even self pleasure!  At Athens Airport a British woman was stopped by security due to the metal detector Beeping!

The crazy part was she was actually wearing the Steel chastity belt as a guarantee of her loyalty for her husband during her holiday. Having trust is crazy i suppose…

A passenger traveling to Bangkok Airport from Bangladesh was apprehended after security found seven freshwater baby crocodiles hidden in suitcases. The authorities received a tip off from an unknown source in order to find the little scoundrels!

So we all love Mexican food the burritos, enchiladas etc. But who’s ever thought instead of eating it, i will use it to conceal a knife! A little bit too spicy for most.  A passenger was caught by security at Sonoma Airport in California bringing an enchilada with a knife hidden on the inside on to a flight. The TSA concluded it was an “accident”  and the passenger was released. Lucky man.

Yes this isn’t a storyline from James Bonds arch nemesis GoldFinger. On a routine flight from Mumbai to Bangkok this was discovered during the aeroplane clean up! I’ve heard of forgetting your phone but this is a new level of stupidity.

According to a source at Mumbai airport, India is well known for regular smuggling of gold.

In the days of Napoleon Cannonballs were commonplace, this days not so common? So where did he get this from?

The story goes, a diver was on an exploration dive and came accross an 18th century shipwreck, where swimming through one of the passages he found the old cannonball cupped it in his arm and managed to swim to surface.

Then the following day he checked it into his luggage along with his socks and pants,  Security control concluded it was too dangerous and potentially explosive, this resulted in an evacuation of all 300 passengers from the plane!

So we all remember those big box PC’s in the 90’s and perhaps even have one lying around with windows 95 on it. They seem pretty useless these days, but too one man it was a perfect carry case for his real 9mm pistol!  TSA officials found it in a checked bag at George Bush Intercontinental Airport.

In the U.S.A, Guns are allowed in checked luggage if they are unloaded and securely packaging,, you also must declare it.

We’ve seen these in old movies, but apparently in the U.S some people actually use them for protection. The TSA discovered this at the Detroit Metropolitan Airport. This leather belt houses a hidden compartment with a knife  tucked inside. Under TSA guidelines this is a concealed weapon which is not allowed in the carry-on. However, the belt could have been put in checked luggage. Source: TSA

So we’ve all been their, reading on the plane and the cabin lights go out, no problem just pull out your trusty gas lamp and get that baby burning.  This was discovered at San Diego International Airport back in 2017. It was found in a passenger’s carry-on luggage and confiscated by the TSA.

TSA states: “The lamp could have been permitted on board if it was clear of all traces of fuel.”

No Jackie Chan wasn’t on board at the time, one man had Ninja throwing stars in his carry on case at Milan airport. He tried to explain they were “for Christmas” who knows?

So most parents always remind us to take your vitamins, but in the far east some people believe taking pills with human skin inside are believe to increase their stamina and energy.  South Korean customs officers  discovered thousands of these pills filled with human skin being brought in from China. According to the  Daily Mail.

I thought pigeons don’t need to check in before taking a flight? According to the Telegraph A passenger on a flight from Dubai was stopped at Melbourne Airport with a pigeon in each of his socks. I’ve heard of pigeon racing but Boeing 747 speed is definitely cheating. Source: Telegraph.

Yes it sounds like something out of Ocean 11 or a Godfather movie where little Vito has to pay the hitman in the most creative fashion.  In 2012, German customs agents reportedly discovered money launderers at the Berlin Schönefeld Airport who had rolled up bills and concealed them in pastries.

My advice, don’t get hungry on board…it will cost you.

So some people like peanut butter and some like the Mary Jane, put them both together is a very fun plane ride! – Source TSA.

So some say travelling alone as a female can be frightening. So instead of learning self defence and staying out of dark alleyways, one woman decided to bring her lovely liptick taser with her. This was found in the womans back in Vermout. The exact voltage was 350,000 volts!

Yes she’s sweet but a psycho.

This is not just a Samual Jackson movie this actually happened. Luckily the Australian officials intercepted the packages before they made it onto the plane. The officials discovered two live 16-inch emerald green tree boas constrictors in clay pots in air mail to Sweden from Adelaide.

This plane must be bugged!

A 22-year-old man attempted to sneak 207 pounds of dried caterpillars through customs at Gatwick Airport in England. According to this source the man claimed that he was going to use them for “food” and “personal consumption” . I will stick to my plane food thanks.

Some people hate leaving their pets at home when they go away. One woman flying from Heathrow Airport in London to Marbella, Spain for a girls holiday was discovered to have the little pug named Ruby tucked in her check in bag asleep.

According to the TSA, A canister of bear deterrent was confiscated at the Seattle-Tacoma International Airport. Not for it being a bear deterrent but just because it was over the allowed liquid size!

This was discovered by customs agents at an airport in France. Although not specifically banned from check in luggage, questions were asked regarding it’s contents. Luckily she was allowed to fly.

Beards have become pretty fashionable in recent years, the strange part about this story is he wasn’t wearing any of the beards at the time. For St paddies day in 2019 one man was found at Dublin airport to  have a full sack of real beards apparently for a costume party, questions were asked but ultimately he was left through. Witnesses stated the “Man smelt like Guinness”

Top of the morning to ya!

According to the BBC,  An eight-year-old Ivorian boy was smuggled into Spain from Morocco inside a suitcase Source: http://t.co/y3bbe1ZVuT pic.twitter.com/D9PnaXZuop .

Must have been a cramped flight, better stick to economy next time.

If you have heard any crazy stories about what has been found at airport security or have any reactions to the above comment below!

Want to know where the best place to sit for survival if a plane crashed, check out this revealing article!

Thanks to its booming arts scene, elite sports teams, and…

Rocky Mountain National Park is one of the most visited…

Among the most dramatic and scenic coastlines of the United…

22 of the Weirdest Things Ever Found in Hotel Rooms!

Weirdest things ever found in hotel rooms? When visiting a…

Thailand is a true hub for incredible Yoga Retreats! The…