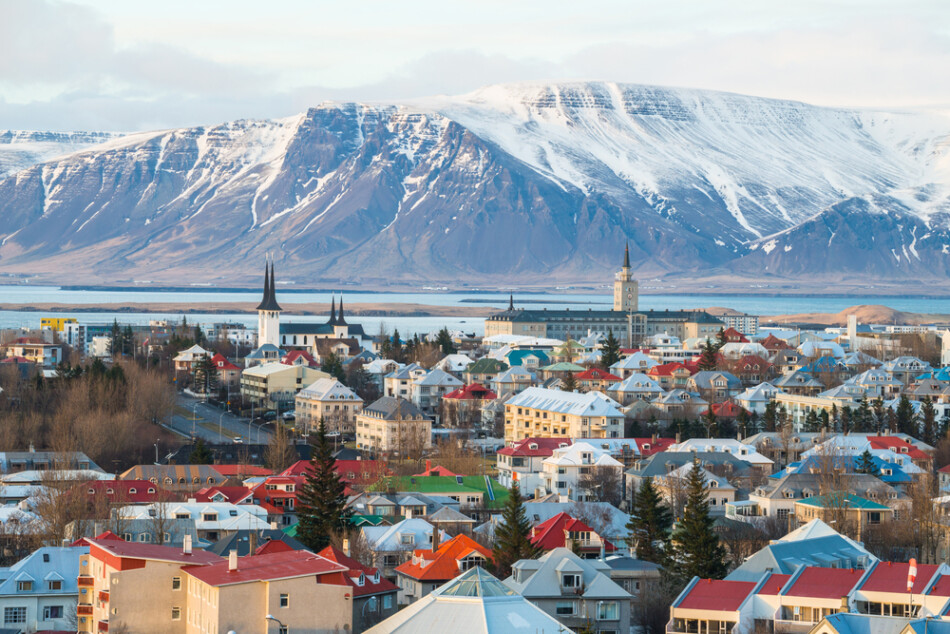 The Nordic island nation of Iceland has an unmatched stunning terrain. It is most famous for its volcanoes, geysers, hot springs, and lava fields. These epic and natural occurrences define the country. Iceland is full of deeply rooted culture and history.

July and August are the best times to visit Iceland. During their summer months, the average temperatures stay around 55 degrees and 60 degrees Fahrenheit. June hosts the 24 hours of daylight. However, if you want to go during the cheapest time, you’ll want to visit between September and May to save 40% on travel costs.

When Should You Not Go to Iceland?

While visiting in the winter might be stunning, temperatures can drop pretty low (in the 20s F). Anticipated temperatures may feel significantly lower due to wind chill. It gets very cold in northern Iceland.

Some suggest that the winter months are when you should not go to Iceland. The iciest months are December, January & February.

If you don’t skip Iceland in December, simply bring appropriate thermal clothing. Despite the freezing cold, December is one of the best times to see the Northern Lights in Iceland.

Cheapest Month to Go to Iceland

Iceland’s off-peak season, which runs from September to November and January to May, is the least expensive time of year.

During the off-season, you’ll be able to explore popular locations without breaking the bank. Iceland travel is most affordable during late fall through early spring.

Flights, vehicle rentals, and lodging are at their lowest prices from January through May since there are significantly fewer travelers.

Iceland is known for being pricey. It is expensive to eat, drink, stay in a hotel, take a tour, or rent a car in this European country, especially when compared to many other places. To many, this gives the impression that the nation is entirely out of reach for those on a small budget. This isn’t the case, though.

You can plan a vacation that allows you to take in Iceland’s beauty without going overboard. If you take the time of year into consideration and are knowledgeable about flights to Iceland, you can save money.

Car rentals that put a strain on your finances in June would not do so in February. Airfares that are exorbitant around Christmas will be cheaper in January.

Iceland experiences its warmest weather in the summer. July and August have traditionally been the busiest months for travel. June attracts almost as many travelers as the height of the summer due to its constant daylight.

You’ll have plenty of options for activities, in addition to being able to take advantage of the long daylight hours and hottest weather of the year. The busiest travel period is between June and August, during the height of summer.

Best Time to Visit the Golden Circle in Iceland

Summer is when most people visit. Spring and fall are also popular among tourists. Driving the Golden Circle and Ring Road in winter is not recommended. Traveling with guided tours given by local Icelanders is recommended if you plan to go during winter.

What is the Golden Circle in Iceland?

The ‘Golden Circle’ is perhaps the most visited location in Iceland. The Golden Circle consists of three primary locations:

The breathtaking natural splendor of Iceland attracts tourists because the surroundings are quite mystical. The Icelandic landscape offers a never-ending string of mountains, ice fields, and snow-covered volcanoes.

The Northern arctic views are unlike anything else you’ll experience in the entire world. Many say the terrain is rough yet “other-worldly.”

The best time to visit Iceland’s Blue Lagoon is all year round. Visiting at night is preferred and acceptable since the year-round temp is 102°F.

Early in the morning or late at night are the ideal times to go to the Blue Lagoon. There are fewer people around, and there are shorter queues to wait in lines during certain times of the day.

When visiting the Blue Lagoon at night time during winter or summer, you have a chance to see either the Aurora Borealis or the Midnight Sun.

Iceland’s Blue Lagoon is not really a hot spring that formed naturally. The Blue Lagoon was constructed in the 70s. Since its formation in 1976, it has enjoyed astronomical popularity.

April through September is the best time for whale watching. Considering that Iceland is literally an island, it seems fitting that a variety of fascinating marine species can be found nearby.

Iceland boasts excellent whale watching, especially in the summer when you can see orcas, blue whales, and humpback whales.

Unquestionably, May through September is the best time for hiking in Iceland. During that time, there is a lot of daylight and little likelihood of rain.

The greatest time to travel to Iceland for severe hikers is during the summer when the highways and mountain roads are open.

From Landsmannalauger to Thorsmork, travelers on the Laugavegur Trail will cover a distance of around 55 kilometers (35 miles). The Laugavegur has been called one of Iceland’s most incredible excursions!

Best Time to Visit Iceland to See the Northern Lights

Due to Iceland’s long winter nights, low levels of light pollution, and several-month long aurora season, you have a very good chance of viewing the Northern Lights there.

The best places to view the Northern Lights in Iceland include the Jokulsarlon glacial lagoon. Jokulsarlon Glacier lagoon is right near the Vatnajokull glacier.

To see the lights flashing across the sky, you can either go around the Ring Road to the lagoon from Vik or locate one of its famous black sand beaches in South Iceland.

Best Time to Visit the Black Sand Beach in Iceland

The summer is the best time to see Iceland’s beaches, which include black sand. The months of May through August are considered to be the ideal times to view puffins in Iceland and visit the black sand beaches. Reynisfjara is the most stunning black sand beach in Iceland.

Not only is Reynisfjara the most well-known black sand beach in Iceland, but it’s also widely regarded as one of the finest examples of its kind anywhere in the world.

Iceland is a stunning place to be every season. However, many roads are closed during the winter months. The best time to enjoy horseback riding in Iceland is during the summer (April through September).

In addition, Icelandic horses have gained quite a bit of notoriety. The Icelandic horse breed is well-known for its dependability, intelligence, diminutive stature, and pleasant personality, among other desirable qualities.

Iceland’s harsh landscape is best experienced via horseback riding tours, which are available throughout the country. Explore the Icelandic countryside on an adventure that takes you over lava fields, through volcanic vistas and hills, and discover hot springs.

The greatest time to view waterfalls in Iceland is in late April through June when there is the highest amount of rainfall. Realistically, anytime in the spring and summer is recommended. There won’t be as many people around at this time, too.

There is no official count, but it is believed that there are over 10,000 waterfalls in Iceland. Seljalandsfoss, standing 213 feet high, is one of Iceland’s most popular waterfalls.

This waterfall is only a few seconds from the Ring Road, has a parking lot directly below it, and is quite stunning. About an hour and a half into your drive, if you take the Ring Road south, you will come across Seljalandsfoss.

Since this is a prevalent location in the area, it’s best to go there either early in the morning or very late at night.

You can get the bad luck of having to share the waterfall with a lot of other tourists if you visit during the day.

The waterfalls that Iceland has to offer are a highlight of any travel across the country. Some of them are situated right next to popular tourist spots and attract hundreds of visitors each day.

Others are tucked away in remote areas of the land, where they await adventurous guests with their unparalleled peace and quiet.

Whether you fly to Iceland to witness them for yourself or are content to just know they exist, Iceland’s waterfalls and the country will leave an indelible impression on you.

The ideal months to visit Iceland to avoid crowds are November – March. These months provide less expensive airfare and fewer tourists, and traveling during off-peak times can help you save money.

November through April is the winter season in Iceland. The average is a temperature below 40°F.

The cold season in Iceland lasts for roughly 5 months. The lowest temperature of the year in Reykjavík is January, with an overall average of 28°F and a high of 36°F.

Wintertime temperatures on the island range from 32 °F in the south to 14 °F in the north. The island’s northern half experiences the coldest temperatures, typically ranging from about 25 to 13 to 22 °F.

What are the Busiest Months in Iceland?

June through August are the busiest and most expensive months to go to Iceland. This is due to school breaks, a more temperate climate, and the popular Midnight Sun.

Iceland’s image as a winter wonderland makes Christmas an expensive and busy time for tourists as well.

Take the Icelandic Pledge Before Your Trip

Since Iceland is unlike anything you will ever experience, it’s good to keep in mind the Icelandic Pledge before and during your trip.

Tourists can join “The Icelandic Pledge” online promising to respect the Icelandic environment. You receive a certificate after signing, which you can post online with the tag #IcelandicPledge.

One important thing to remember: be sure to never, ever step on the Icelandic moss. It takes decades to grow!

Norway is one of the most lively, unique, and festive…

Best Time To Visit Scandinavia (Outdoor Fun For All Seasons)

Scandinavia is a region in Europe that consists of Norway,…

Denmark is a remarkable place to visit with royal palaces…

California has so much to offer – constant sunshine, incredible…

In Europe’s northern region lies the Scandinavian country of Sweden.…

45 BEST Things To Do With Kids New Orleans, LA (You'll Have Fun Too!)

New Orleans is a lively city in Louisiana located on…

New York is such a beautiful state that it is…

Summer days in North Carolina can get really hot. There’s…