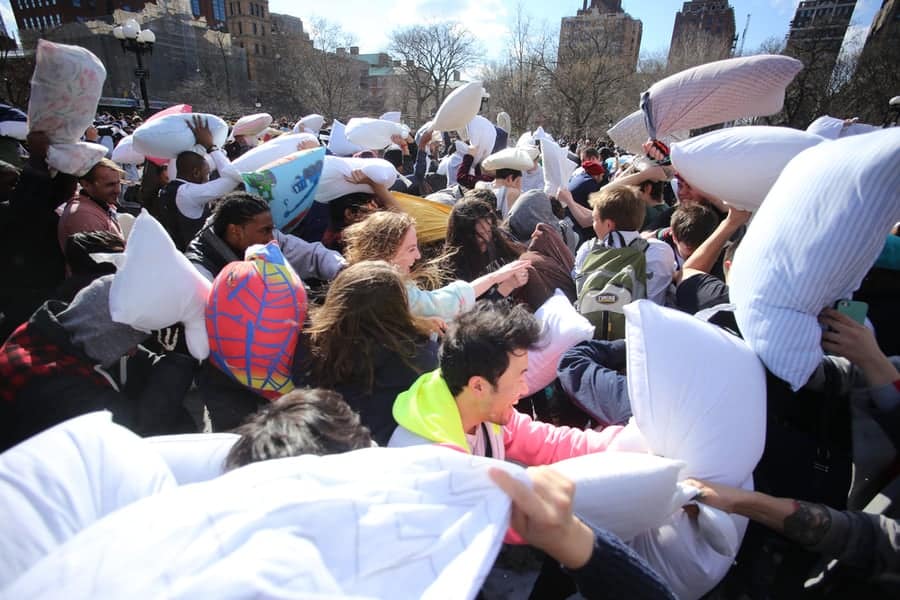 Urban Pillow fights are a growing trend across the United States and the World! With many of us having stressful, busy and downright serious lifes there is no funner way to release all that tension then with an Urban Pillow Fight!

Not to mention, the added health benefits and Cardio exercise of swinging pillows at your fellow pillow warrior! So get ready to watch the feathers fly at some biggest annual pillow fights and pillow fight clubs in the world!

According to the Guinness World Records, the largest Pillow fight ever happened on the 18th May 2018, in Minneapolis, Minnesota, USA. 7,681 pillow warriors took part in the battle, organised by MyPillow, Inc. (USA).

The gigantic Pillow fight was completed, as part of a Evangelistic Christian Concert for 60,000 people, as part of the free PULSE movement event at the Minnesota Vikings Stadium.

When is International Pillow Fight day?

International Pillow Fight Day, takes place annually on the 6th April. The first ever world pillow fight day happened in March 2008. Over 11 years on and the movement is growing, stronger and stronger each year. With flash mobs popping up in over 200 Cities across the world.

Apart from the General Pillow Fights rules explained further down there are three main ones you need to know for the Annual Pillow Fight In New York City.

Should you bring your own pillow?

If you don’t wan’t to get your own pillow destroyed or damaged. Head down to “Mattress Firms Noho Location, where they will give you a durable fighting pillow in exchange for a $5 donation to their Foster Kids Program…Win, Win!

Some enthusiastic pillow fighters who attend NYC’s gigantic Pillow Brawl, dress up in Fun and Wacky Costumes from Superheroes to cartoon Characters.

Apart from being a fun community event, it is also a good hearted charity occasion where many of the pillows are donated to homeless shelters in New York.

What better way to show love and affection then hitting someone across the hit with a pillow! At San Francisco Annual Valentines Pillow fight, many enthusiasts prefer to avoid the standard candle lit date night and instead opt for a wild pillow fighting competition!

Starting over 10 years ago, this event has just got bigger and bigger! Despite it’s heritage, the giant pillow fight event officially has no permit. But, if a few thousand people wan’t to have a pillow fight, it would be pretty difficult to try and stop them.

Many of the Avid pillow warriors here a former attendees to the Iconic and hedonistic Burning Man festivals at Black Rock Desert!

My Favourite part about the San Franscisco event is it’s true flash mob style, that started with a meme, word of mouth, before exploding into a movement.

Bring a bandana or mask to cover your mouth, as it’s easy to choke on all the feathers!

The San Francisco Annual Pillow fight attract a few notable celebrities who wish to release the pressure of stardom by clobbering a fan on the head with a pillow.

So while you are asking yourself “Do I know that guy from TV?” BOOM! 1:0 to the celebrity! In the photo below TV actor Dwight crow from the TV series Silicon Valley and Start Ups is captured hitting

It’s really good idea to help clean up after the event, as if you love San Francisco it’s best not to trash it! Any mess left over, has to be cleaned up by the San Francisco Department of Public Works, “Public works will have a crew to clean the feathery mess after the fight,” DPW spokeswoman Rachel Gordon said. It is estimated this costs the tax payer is around $5000.

The annual Pillow fight in LA, has to be one of my favourites. This is less flash mob and more  a Pillow fighting festival.

With DJ’s , Tasty Food Truck etc. The organizers recommended bringing soft, featherless pillows and a broom/garbage sacks to help with the clean up along the plaza.

Pyjamas are a popular outfit worn at the LA Pillow fight! Overall it’s great fun and a truely awesome event.

Both Macy’s and Bed Bath & Beyond usually have President’s Day sales leading up to the event, which includes pillows.

This is a real fun, well organized and the perfect place to embrace your inner Child! Free for everyone, it’s the perfect opportunity to put the PJ’s on!

The Pillow Fight Festival, is a great opportunity to increase donations for homeless shelters and charities.

Free Raffle tickets are on offer, giving pillow enthusiasts the chance to win, a free 4-night vacation or a quirky t-shirt. Not bad for a afternoons morning cardio.

At the Austin Pillow fight, many guests are strongly encouraged to dress in their wildest and most colorful costumes. Previously, great costumes have included the Ninja Turtles, Thor (with his hammer pillow), iron man and even gigantic Pillow Monsters!

The event runs from 3pm to 6pm, and you can join anytime throughout.

– Meet at the Gazebo next to the playground.
– Bring a pillow that’s soft
– Wear comfy clothes.
– We do this rain or shine.
– Wait for the whistle.
– Fight from the neck down.
– When the final whistle blows, disperse.
IMPORTANT INFO:
– Keep an eye on your children at all times.
– Don’t bring anything of value because you’ll probably drop everything to pillow fight. It’s that much fun.
– fun and family friendly.

Toronto hosts one of the Greatest and wildest urban Pillow fights in the World! Taking place annually in Nathan Philips Square just in front of city hall. The pillows start to fly at 3p.m and continue for few hours.

Officially only light pillows are allowed, but of course there are a few people who bring the big ones, so watch out. Celebrated annually on the first Saturday in April, the is a real awesome, unique and truly bucket list event.

If your in Europe, then the London International Pillow Fight is one of the most iconic and truly great ones to attend.  This Free event is usually held at the Allen Gardens. There are two allen Gardens in London so make sure you attend the one close to the hipster area of Shoreditch. This ye

Some years the event has been ran in Trafalgar square also. So check the link on the next section for the most up to date location.

Who organizes the Annual Pillow Fights?

A organisation called New Mind Space, ran by Kevin Bracken and Lori Kufner organizes the majority of pillow fighting events across many cities all over the world. They also organise other FREE flash Mob Style events from Bubble Battle NYC, where everyone uses bubble guns.

To large Public Capture the Flag competition and even a gigantic Mistletoe Kiss, where many couples were brought together for the Worlds Largest Kiss under the Mistletoe in 2010. For each kissing couple, virgin the sponsor, donated $5 to a charity.

How do I attend an Annual Pillow Fight?

New Mind Spaces, organises Pillow Fight events across many cities all over the world. So is your best bet if your wan’t to attend a large pillow fight! For a list of all their up and coming pillow fight events, see the following link on Facebook. They have a facebook group for each of the follow events on the list pillow.

The Annual Pillow Fight Events include:

The rules for engaging in a pillow fight tend to be unwritten and improvised for the most part. However, after last year annual pillow fight in NYC I managed to write down some important ones after speaking to the many competitors.

Starting a pillow fight, follows similar rules to starting a food fight! Spontaneity, a competitive spirit and a fun mindset is the best way to start an pillow fight duel. 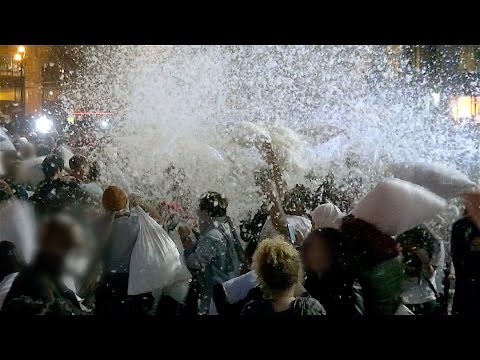 Make sure there are plenty of fluffy pillows nearby before starting a duel. The best pillow to use depends upon your physical strength, size and who your are duelling.

Feather ones are the best for theatre, (as you can literally watch the feather fly!),  memory foam is a heavy duty one, perfect for big competitors. Flat pillows are best for speed although, not much power behind them.

According to a champion Pillow fighter, named “Tyson” actually his name! Who seemed to be holding his own, at Nyc’s Annual Pillow fight I asked him some tips.

If your doing some Christmas Shopping this year in Central Boston, you may find yourself being challenged to a Pillow fight by a man dressed as an Elf!

A Boston firefighter, has been spreading holiday cheer and freaking some people out all across Boston, by dressing up as the Will Ferrel character Buddy the Elf and challenging people to Pillow Fights in the street. 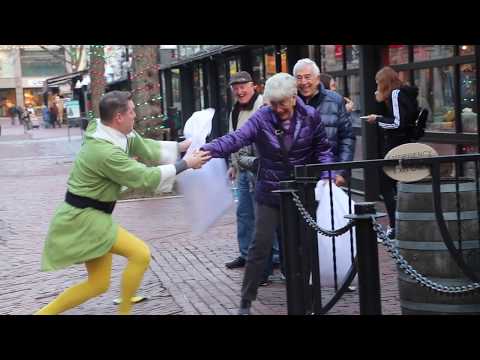 What is River Pillow Fighting?

River Pillow Fighting involves two competitors both armed with a pillow each straddle a log suspended over a river or lake. The winner is the competitor who can knock his opponent of the log and into the water.

The competition originated in Asia, and is a celebrated during the Thalfavang Kut festival, by the Mizoram Cultural tribes of India. In addition, at the water festival in Biyagama, Sri Lanka. 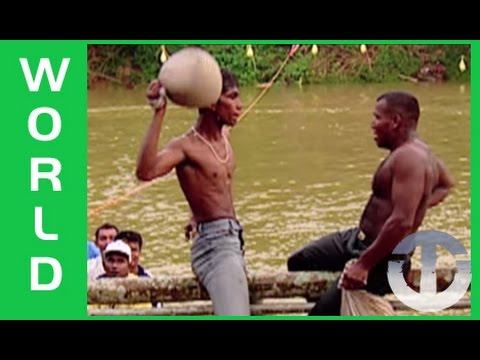 The tradition has also been seen in parts of Africa, namely Gambia where it is looked at as a fun variation to the traditional Gambian Wrestling.

Pillow fights are awesome, fun activity which is great cardio. According to bloomingwellness.com, the average pillow fight lasts approximately 20 minutes and can burn up to 755 calories!

A great excuse to attend one of the great annual pillow fights! Let us know your thoughts on Pillow Fights in the comments below! Fun, Liberating activity or just completely pointless??

For other wacky and Wild Festivals check out!

Woofstock – The Largest Dog Festival in the U.S.A

Infinity Pools in South East Asia, are a bucket list…

While Aspen Colorado is more often sought after by those…

Those fortunate enough to live aboard their very own boat,…

Maryland is one of the country’s most vibrant melting pots,…

How Much Does a Houseboat Cost? (Initial Cost, Docking Fees & More!)

Houseboats are popular throughout the United States whether they’re meant…