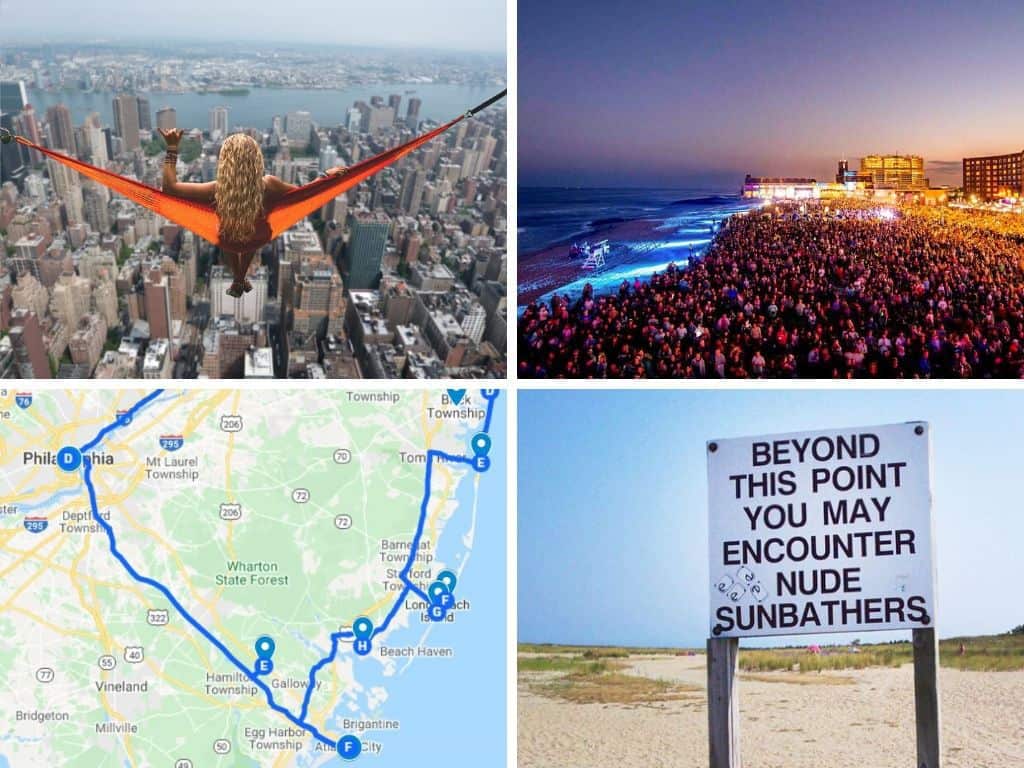 In addition, to it being a melting pot for culture, from Chinatown to Little Italy. As the hub of the east coast, NYC is an destination for an epic road trip!

New Jersey is an interesting state which is often underrated due to its big brother New York just next door!

However, New Jersey has alot to offer from stunning beaches to great food and a diverse culture.

Known as the Diner Capital of the world, New Jersey is home to the most number of diners anywhere on earth!

On a road trip to New Jersey you will travel past some of the most charming coastal towns in America & a few crazy attractions! From the historic lighthouse at Long Beach island to the vibrant boardwalks of Point Pleasant & seaside heights (Jersey Shore) to even a Nudist beach (Middletown)! This is if your heading to Atlantic city of course!

Atlantic city offers some of the best, biggest and most famous casinos…just behind Las Vegas.

Fun Fact: As the second city ever to Legalize casinos, in the U.S.A, New Jersey passed the laws in 1976 and opened it’s first Casino in 1978!

If you checked out our New York to Atlantic city road trip you will know it’s one to visit!

How long does a road trip take between New Jersey & New York City?

Driving direct from New York city to New Jersey would take you approximately 1 hour, 40 mins and you will cover 79 miles via I-95S

Of course this is without stopping anywhere enroute and avoiding NYC’s notorious traffic.

If your driving from Trenton the capital of New Jersey then this is your fastest route.

However, if your plan on heading to the New Jersey coast (recommended!) and even Atlantic city then you will need to factor this extra travel time in.

For example, Atlantic city is another 91 miles from Trenton so this will take you approximately an extra 1 hour 30 mins.

The NJ TRANSIT system is the second busiest rail system in the USA, this means trains are very regularly between New Jersey & New York.

The 11 NJ TRANSIT train lines offer an extensive route which covers almost all of Northern New Jersey and shuttles rides into Penn Station in Midtown Manhattan.

Ticket prices cost between $5 to $16+ dependent upon your location.

The PATH train is a high-speed, underground system which links New Jersey to Lower and Midtown Manhattan.

The trip costs just $2.75 per ride and connects travelers between New York City Subway stations and many other transit systems in New Jersey.

The train is a modern & enjoyable way of traveling in & out of Manhattan.

If plan on traveling in and out of the New York City Port Authority Terminal then this could be your cheapest option.

There are over 240 stops & routes available so you will always find a convenient & cost effective journey.

Aim to travel during OFF PEAK hours or you could get trapped in Jerseys notorious traffic! Be sure to budget plenty of time.

Fun Fact: Midtown Bus terminal is the Busiest Bus Terminal in the USA and the Worlds Largest!

D. New Jersey to NYC Ferry – Fastest if near the river!

The NY Waterway calls itself as “the fastest commute to NYC,”  if your traveling from near the Hudson River then its definitely the truth!

Manhattan is an island after all!

Just be aware that this can be a more expensive method of transport. With a one way ticket costing between $9-$20.

But for some it doubles up as a relaxing city cruise, so definitely worth the price.

Based Live further Away?

If your based further away then take the high speed Seastreak Ferry which runs from Highlands and Atlantic Highlands, New Jersey, to several different New York City ports.

This is a large ship, with comfy seats, television and lots of room to stretch out.

However, the Seastreak will cost you $46+ round trip.

The good news is you will get some great views en route passing by the Statue of Liberty!

Is there a Casino Bus to Atlantic City from New York?

Yes! If your on a Budget or don’t want to drive then the Bus is an easy and very affordable option.

How long does the Bus take to Atlantic city?

Your best option is Greyhound’s “Lucky Streak” service which departs from the Port Authority Bus Terminal.

The Bus will drop you off directly at a number of different Atlantic City Casinos including Atlantic city Bus Station.

Disembarking at a casino will often entitle those taking a round trip to FREE PLAN CASINO VOUCHERS!

The Return tickets are open and can be used to get back to NYC anytime.

The Bus ride down is really fun and upbeat with a positive vibe from those hoping to win big in Atlantic city!

Whereas, on the way back is full of a real mix of characters including those which lost big!

Where to Stay in Atlantic City??

For a great list of our recommended places to stay in Atlantic city, follow the link HERE

For a full guide on US casinos and it’s crazy laws check out: Why Isn’t Gambling legal in all States? Casino Guide!

Dive into our Interactive Map Below!

Including an selection of the best places to stop and visit enroute!

User Guide: Use the plus and Minus buttons to Zoom in and Out of the attractions.

Many visitors choose to share this map on Facebook and then use it on their road trip by hitting the link below.

Middletown is a curious place which offers everything from historic lighthouses and museums to a NUDIST BEACH!

Asbury Park  is known for its musical heritage. Bruce Springsteen actually comes from the city! It also has the sixth best beach in New Jersey, according to a recent poll.

Stroll along the Asbury Park boardwalk where you will be sure to see some buskers!

For more on the State Fruits & recipes you should try! Check out this incredible post: 50 U.S State Fruits: Foodies Guide & Recipes!