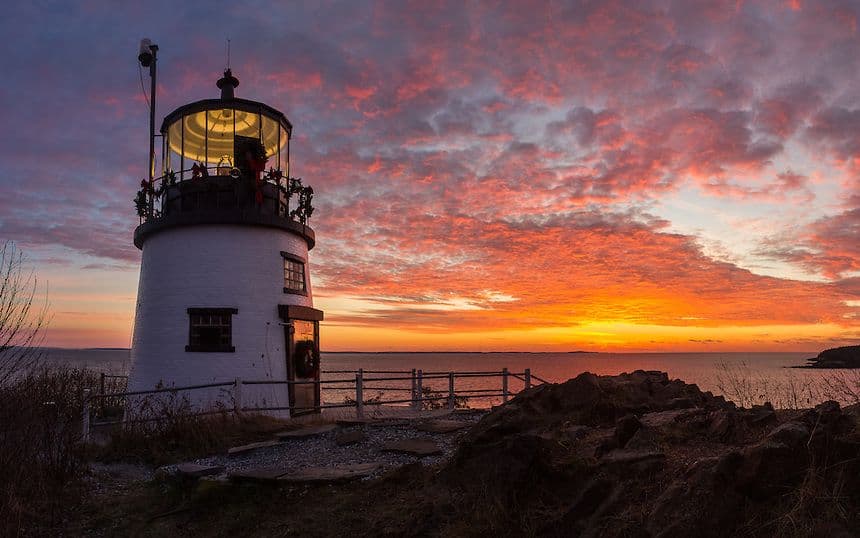 In addition, to it being a melting pot for culture, from Chinatown to Little Italy. Whereas Maine is the northeastern most U.S. state known for its rocky coastline, maritime history and nature parks such as Baxter State Park, where Moose are common and Mt Katahdin marks the endpoint of the Appalachian Trail.

Head further and you will discover the granite and spruce islands of Acadia National Park.

Discover them all on our: Ultimate Maine Lighthouse Road Trip

How far is Maine from New York?

At the lighthouse museum in Maine, you will find movie documentation.

Does Amtrak go to Maine?

Yes! Its a great way to avoid the traffic around New York City. Since 2001, the Amtrak passenger rail service has returned thanks to an avid campaign which was supported by the Town&Tourist community.

How long is the Train between New York and Maine?

The Train takes 8 hours with a change over at Boston Back Bay to Boston North Station.

How much does it cost to go from New York to Maine on Public Transport?

It costs between $70-$179 to catch the train between New York and Maine. This depends upon the season and particular train.

From my last road trip I have created this helpful Map of the New York to Boston Road trip which has popular attractions/cities en route.

This will really help you when planning your road trip across the USA!

USER GUIDE: Simply share to your facebook (click the link top right), email it or just turn your phone sideways and use it on your phone!

Use the above table to compare public transport prices, distances, cost and travel time for each leg.

For the best prices on Public Transport use our recommended comparison tools:

New York City is one of the most iconic cities in the world and as you might have guessed it has alot to offer!

Brooklyn Bridge is one of the most iconic places in New York City.

Either drive straight over or take the subway to Downtown Brooklyn then take a walk over.

The is the perfect place to capture some iconic New York City photos, great for instagram, facebook or just good old fashioned memories!

Check out John Lennons Strawberry Fields at Central Park. This is where his ashes were scattered after his fatal assassination in New York City!

Where to Stay in NYC?

Boston is the vibrant capital of Massachusetts and although small it packs a big punch! If your here for just one day I suggest starting early and making the most of it!

Starting early, the best way to way to explore the city is by taking a door! The most popular has to be the “Freedom Trail” walking tour.

The Freedom Trail connects 15 sites of great significance in the Colonial history of the United States. The route marked with a series of painted bricks on a series of sidewalks between Boston Common to Bunker Hill Monument in Charlestown.

There are a variety of interesting stops along the way from churches, notable landmarks, Graveyards and Naval Warships!

How to book a Freedom Trail Tour?

The National Park service has a visitors center located on the first floor of Faneuil Hall.

From here you can sign up for tours, and also get your hands on some free maps of the freedom trail.

Cost of the Freedom Trail:

In general most of the sites along the Freedom trail are free, with some having a place for donations.

This is supported in part by grants from various nonprofits and foundations including the Boston National Historical Park.

However, in spite of this a small number of sites charge admission, these include:

For those that would rather not walk and would prefer to see the sights on your comfy transport than book the double decker bus tour.

For a unique tour book the world famous duck tour, a half bus/half boat which take you on an epic tour of Boston by land & sea!

11 am: Check out the Isabella Stewart Gardner Museum

After your tour head down to the  Isabella Stewart Gardner Museum. This is a cultural gem of Boston.

Getting hungry? Head down the famous Newbury Street, where you will discover a pleathora of trendy restaurants, cafes and shops.

For a sweet treat, check out Georgetown Cupcakes or for a “pick me up” coffee try out Trident Café.

This is the perfect place to find a souvenir or gift for loved ones.

Copley Square is a cultural hub, here you can find a mixture of breath taking architecture, nature and landmarks.

Take a walk past the Infamous Boston Marathon Finish line  and check out Boston public library a place with astonishing decor inside.

Round the square you will also find a variety of shops & eateries.

2 p.m: Relax at the Boston Common

The Boston Common, is Bostons equivalent to central park.

A place of nature spreading 20ha, the perfect tranquil escape from the energetic city surrounding.

Fun Fact: Dating from 1634, it is the oldest city park in the United States.

Insider Tip: Take a Swan Boat ride on the pond, this is a great family activity.

No matter what your team is, the Boston Red Sox are an iconic baseball team you have to see! Established in 1953, the fans enthusiasm is contagious! Head down to watch a match or take a tour of Fenway park.

Head to one of Bostons most famous food halls such as Quincy Market, which houses nearly 40 gourmet food vendors. Just 10 mins walk from there is Faneuil Hall, in Bostons little Italy district.

10pm: Stay the Night in Boston

Get some rest at one of these recommended hotels in Boston, before carrying on your road trip in the morning. You could easily spend a few more days in Boston, so feel free to extend your trip.

Where to Stay in Boston?

Hop of the train in Portland, Maines largest city and a good place to base yourself. Before heading out to explore Maines famous Lighthouses, Nature wonder and of course tucking into some Fresh Seafood!

The Old Port waterfront has a selection of working fishing wharves and converted warehouses equip restaurants and shops.

Close by you will find the Western Promenade,  public park  with scenic river and mountain views.

The West End of Portland is best for history Buffs, where can find Victorian-era homes, including the Victoria Mansion museum.

Where to Stay in Maine?

For an extensive Maine Road Trip,