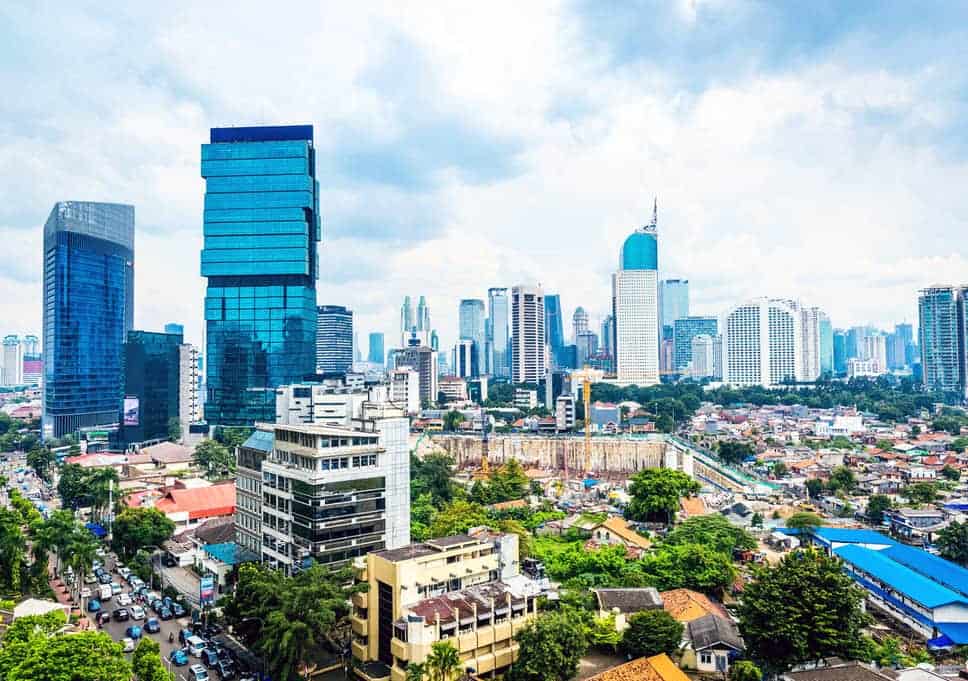 Jakarta is not the place most people think of when it comes to best places to travel in Indonesia. Many see it simply as a pitstop enroute to other areas such as Bali. But should you stay here longer?

Well this summer I decided to extend my stay here for 3 days before heading to Bali, so here is the on ground info! Long story short, Jakarta is a unique cultural city break which is just a little more authentic than the overrun tourist traps.

What the Vibe in Jakarta?

Jakarta is located in the Northwest coast of Java Island and is the nations capital. As a Capital city in Southeast Asia, it is vibrant and very busy!

With an estimated population of over 10 million people it’s one of the most heavily populated cities in Southeast Asia.

Despite such a large population it’s not really a popular city for vacation tourists. It tends to act similar Manilla, in that it’s a stop over before heading to various other destinations such as Bali, Lombok, Bandung and Yogyakarta.

Like most of Southeast Asia, Jakartas seasons are split into two, wet & dry seasons. The Best time to visit Jakarta is in the dry season which runs between JUNE and September.

At this time of year you will be blessed with 11-12 hours of sunlight, 24-32’C & clear skies. This makes it great for sightseeing.

Wet Season which runs between October and May is not Ideal as rainfall is higher, with January & February being the wettest months.

Do I need a visa?

If your staying in Jakarta for less than 30 days, you can be given a passport visa on arrival stamp. Keep in mind your passport must be valid for at least 6 months. If you plan to stay longer than 30 days you can apply for a visa online, at the embassy or airport.

How to get to Jakarta?

Airport: Most travellers who wish to explore Java Island will enter Indonesia via Soekarno-Hatta International Airport in Jakarta. This is located just 29km (18miles) to the west of central Jakarta.

How to get from the Airport (Soekarno-Hatta Airport) to Jakarta city centre?

You have a few options to get from the airport to Jakarta City Centre. These include Train, Bus, Private Transfer and Taxi. Chossing which one suits you depends upon your budget and how long your in the city for.

The Airport Rail Link is my favourite way of getting to the city centre. It costs just IDR 70,000  ($5) each way and leaves from Terminal 1. If you flight arrives at terminals 2 or 3 you can simply hop on the skytrain to terminal 1.

The Airport Rail Link runs to Sudirman Baru (BNI City) Station (45 mins) which is approximately 4 km south of Merdeka Square. Tickets can be purchased at the station or in advance.

The Damri Bus is the cheapest way of getting from the airport to Jakarta city centre, it costs just IDR 40,000 each way. You should get of at Gambir Station, which is closest to the Merdeka Square.

Damri buses to Gambir Station run between 3AM-9PM, and you can purchase a ticket inside the bus or at the Damri Bus counter.

Private Transfer from the Airport:

If you have a large enough group or are arriving late at night it might be worth getting a convenient one way transfer direct to your hotel. We did this as we arrived a 2AM and it cost us IDR 250,000 ($17).

If your hotel doesn’t provide transfers, then you can book one in advance through Klook.  for just IDR 262,500 each way, $18.

Taxi from the airport?

As with most major cities you always have to be careful with Taxis. In Jakarta there are two taxi types, Premium & regular. Premium offers no line but double fare! For the normal taxis you must get a queueing number from the machine.

Insider Tip:
At the taxi machine you can choose blue bird or non blue bird taxis. I suggest using blue bird taxis, these are most popular with the locals. The approximate cost is IDR 200,000-250,000 ($17)  to get to central Jakarta from the airport.

How to get around Jakarta?

If you follow the above Itinerary, the majority of tourist attractions should be within walking distance from your hotel.

The lowest cost way of getting around the Jakarta is the Transjakarta Busway. This is a network of air conditioned buses which run on bus lanes so they don’t get stuck in traffic.

Tickets can be purchased using reusable stored value card available for purchase at any Transjakarta station (IDR 40,000 with IDR 20,000 credit). You can check the Transjakarta website for a network map. There is also apps like Grab or Go-Jek.

Where to Exchange Currency…and not get scammed!

This is a convenient & safe way to exchange your currency. The unit of currency in Indonesia is the Indonesian Rupiah (IDR).

The ATMs in Jakarta offer pretty fair rates which is another benefit of Jakarta not really being a “Tourist” city. This is also a great option if you don’t wish to carry too much cash around. However, i did notice not all of the ATMs i tired worked with my card, so keep this in mind.

Inform you bank before using your card abroad & if the ATM gives you an option of charging your Bank in your local currency or in IDR, choose IDR (“Without Conversion”)! This will ensure you will get a better exchange rate as YOUR local bank will take care of it.

Is Jakarta a Safe city to visit?

Like many major cities, Jakarta has good areas and bad areas. I suggest avoid the north areas. When in the old town watch out for pickpockets like in any tourist area.

On 24 May 2017 there were bomb explosions at the Kampung Melayu bus station in east Jakarta. Three police officers were killed.

On 14 January 2016 a terrorist attack took place near the Sari Pan Pacific Hotel and Sarinah Plaza on Jalan M.H. Thamrin in central Jakarta. The attack included a number of explosions and gun battles. Eight people died and a number were injured, including foreigners.

According to the U.S Embassy:

Overall though if you follow the proper precautions you should not be in any more danger then any other Indonesian city.

Where to Stay in Jakarta?

If your traveling to Jakarta and here for just one day then you would be best staying close to Gambir Railway Station close to Soekarno Hatta International Airport.

Menteng is the business center of Jakarta and within walking distance to many popular attractions such as the National Monument, Istiqlal Mosque and Plaza Shopping Mall.  Its also just a short taxi from Gambir Station.

Gambir is located just north of Menteng. This is central to the popular attractions of National Monument, Istiqlal Mosque and National Museum. However, this area doesn’t have many commercial areas thus I prefer Menteng to stay. But if you have just one day stay here as it’s close the station.

Kemang is located father south but is a cool hipster area in Jakarta. Here you will find cool boutiques, cafes, bars and gourmet restaurants.

Things to Do in Jakarta:

If you fancy giving Jakarta a 2-3 days at least then you will be rewarded with alot of culture and history. From the extensive National Museum to the Old town (Kota Tua) with offers dutch style colonial Buildings.  There is even a variety of high end hotels & shopping malls!

The National Monument or Monas  is Jakarta’s most famous structure. It Stands 132 meters (433 ft) in the center of Merdeka Square, and was built between 1961-1975 to commemorate Indonesia’s struggle for independence from the Dutch empire.

How much is it?

Entrance to the park is free, but to enter inside the monument you will need to pay IDR 15,000, ($10). This includes entry to National History Museum and two viewing points included one right at the top.

Just next to Istiqlal Mosque, Jakarta Cathedral which is a Roman Catholic Cathedral constructed in 1901. The idea of this Cathedral is to show religious equality and diversity, even though Catholics only make up around 3% of the population, majority are Muslim.

Jakarta Cathedral is located just northeast of Merdeka Square, you can walk here from the National Monument.

Just opposite Jakarta Cathedral you will find Istiqlal Mosque, the largest mosque in Southeast Asia! This was built to commemorate Indonesian independence.

When I walked inside i felt a real serene and tranquil energy come over me, the architecture is astonishing also…arguably the most captivating landmark in Jakarta.

The Old town or (Kota Tua) is the original downtown of Jakarta. Here you will discover Dutch colonial buildings which date back to the 17th Century. At this time this area was the Asian HQ for the spice trade.

The area is vibrant and culturally rich with many locals and tourists coming to soak up the atmosphere.

You should rent one of the Antique bikes called (sepeda ontel) from  “Kota Tua” in Fatahillah Sqaure. Here you can rent each bike for IDR 20,000 ($1.50) and ride around the square, for half an hour. You even get an Indonesian floppy hat to wear.

Many call the National Museum the Elephant Museum, due to the elephant statue on front. This museum has one of the most extensive collections in Indonesia with a pleathora of over 170,000 ancient artifacts, statues and textiles.

This will really help you get to know Indonesia has a whole country and see the development over time.

How much does it cost?

Collections include: Traditional boats, such as the Bugis boat to a Warship from Maluku called Kora-Kora.

Ragunan Zoo is a 140-hectare zoo located in Pasar Minggu, South Jakarta. The zoo houses a variety of endangered animals from all over Indonesia.

Who says Jakarta doesn’t have a beach? Ancol Beach offers a small city beach which is a great place to relax after a days sightseeing.

Great Places to eat include:

An Iconic street food stall which has been serving some of the best goat fried rice in Jakarta for many years.

Martabak Boss is a family friendly chain of restaurants and food vendors which specialize in martabak. Martabak is a style thick stuffed pancake which can be either sweet or savory.

Tesate offers the most mouth watering chicken, lamb, and beef sate in Jakarta. You such also try there Indonesian fried rice made with shrimp paste and oxtail. Tesate

At night why not head to one of Jakartas famous rooftop bars. Head to BART Jakarta, for creative cocktails in a stylish setting.