How Much Does a Houseboat Cost? (Initial Cost, Docking Fees & More!) 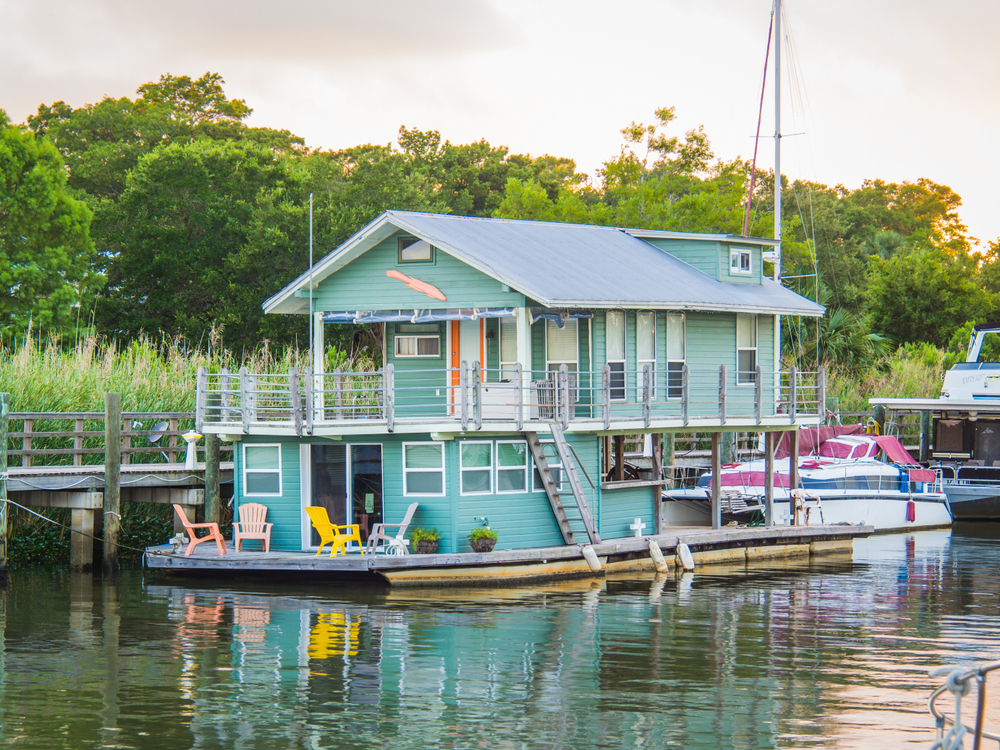 Houseboats are popular throughout the United States whether they’re meant to be a summer home or permanent residence. With that said, it is understandably intimidating to purchase a houseboat because of the initial startup costs. So, how much does a houseboat cost?

Even still, it is cheaper to live in a houseboat than a traditional home between the mortgage and insurance. However, there are disadvantages to living in a houseboat, such as plumbing and docking fees. Follow along as we explore the costs of a houseboat.

How Much Does a Houseboat Cost to Own?

Houseboats cost at least $145,000 on average before utilities, maintenance, and living expenses. Marinas charge a fee to dock and monthly maintenance is required if you want your houseboat to stand the test of time. You also need to consider factors such as insurance, luxury tax, heating, amenities, and the size of the vessel

The initial cost of a houseboat is the most important factor to consider. Generally, houseboats cost an average of $145,000, but they can exceed $1,000,000. A houseboat can cost under $80,000 but anything below $100,000 is typically smaller and has fewer bells and whistles.

Houseboats that cost below $100,000 typically lack additional seating, large cabins, and premium materials. You don’t necessarily need a massive houseboat, but one that features a large cabin or multiple cabins is the gold standard. It ultimately comes down to what you want out of a houseboat.

It will be difficult to spend under $100,000-$200,000 if you need to house multiple people. However, many people simply purchase houseboats for quick trips or summer vacations.

The size of your houseboat is one of the most important factors in the overall cost. Houseboats typically cost between 28 and 100 feet long and are priced accordingly. The bigger a houseboat is, the more expensive it will be.

Generally, a 100-square-foot houseboat will cost $1,000,000 or more. This is due to the sheer cost of materials and manufacturing time that drives the sales price. A houseboat that measures under 30 square feet may cost as little as $70,000, especially if the hull is made of aluminum.

Fuel prices are a major and consistent expense for houseboats. You can expect to spend at least $3-$4.50 per gallon on fuel for a houseboat. However, petrol fuel can cost over $7 per gallon depending on where you live.

The average houseboat uses an average of 3 gallons of fuel per hour while in motion. However, houseboats aren’t typically in motion as much as a cruiser, fishing boat, or party boat would be. Another factor to consider is that the fuel tank itself will need to be replaced eventually.

Amenities add significant value to houseboats and they are major cost factors to consider. For example, a houseboat that features premium amenities such as high-end materials and electronics will always cost more. It’s common to upgrade the lighting, sound system, upholstery, and cabin on old houseboats to increase their resale value.

For example, a houseboat with onboard Wi-Fi, a Bluetooth system, and LED lighting is typically at least 10% more expensive. Some amenities, such as showers, bathrooms, washbasins, and toilets add a lot of money to the price tag. Of course, every houseboat features a toilet and washbasin, but having more than one of each adds value.

Of course, used houseboats cost much more than a new model that you buy through a dealer or manufacturer. It is worth it to purchase a used houseboat because of how much cheaper they are, especially if it is in good condition. Typically, a houseboat loses at least 10% within the first year that you purchase it.

After that, they continually lose their value by an additional 5% to 15% each year that you own it. This is especially true if the boat has been heavily used. Once a boat is approaching or at 10 years old, it can lose as much as 50% of its value.

That doesn’t mean that the boat is inoperable or that you should avoid it, however. It simply means that its market value has diminished significantly. Many collectors and boat enthusiasts specifically look for used boats that fall within the 5-10 range to save money on the initial purchase. This is a great idea if you want to invest your money in making it last the long haul.

You also have to pay a luxury tax if you purchase a high-end houseboat. Unfortunately, this is an unavoidable cost for the majority of houseboats that are currently on the market. The luxury tax applies to boats that cost over $100,000, and that is a common price for houseboats.

Now, the luxury tax applies to high-end items such as airplanes, expensive cars, and premium jewelry. It entails a 10% tax which can make a huge dent when you’re buying luxury items. This tax has made an impact on the boating community because spending an extra $10,000 on a $100,000 boat is hard to justify.

Factor in the luxury tax before you decide to purchase a houseboat to save money. The extra cost could make the difference between buying a smaller houseboat and one that exceeds $100,000.

It costs an average of $1,150 per month to dock a houseboat. However, docking costs vary largely based on where you live and the property values in the area. For example, docking somewhere like Miami or Los Angeles will cost much more than the Lake of the Ozarks in Missouri.

You may only spend $300 per month to dock a houseboat if you live in a rural area or aren’t in a major city. Docking a houseboat in an area with a large population or limited marina space costs much more than in a remote location. Every marina is different, but some may impose extra fees based on services such as utilities and refueling privileges.

Marinas generally base the cost of docking on the size of the boat. While the cost appears as a monthly bill, many marinas base it on each foot of the boat for a whole year. Like any rental, marinas typically require a year lease for houseboats and charge an average of $126 per foot per year.

Some people use their houseboats as their primary dwelling, and that will always require more maintenance. However, it’s much cheaper to maintain a houseboat that you simply use on the weekends or seasonally.

On average, it costs just under $1,000 per month to live on a houseboat. This includes the docking fee, groceries, and personal costs. Many marinas charge you for utilities if you connect to their power or if they take care of waste removal. You also have to pay additional fees at most marinas if you live onboard your houseboat.

These fees are typically between $100 and $200 per month in addition to the docking fees. Factor in basic living expenses such as groceries and medications as well. The average single person spends at least $324 per month on basic groceries such as food, beverages, and toiletries.

Of course, the cost quickly soars when you have additional people living on your houseboat. The average family spends at least $950 per month on groceries, and that adds up quickly.

Houseboat insurance is necessary so that you don’t have to cover the cost of an emergency or disaster. With that said, insurance is a major factor to consider when you budget your houseboat. It costs at least $100 per month to insure a houseboat.

Factors such as your location, insurance history, and policy provider affect the overall cost per year. For example, your monthly houseboat insurance premium will go up significantly if you’ve had prior incidents such as crashes or fires. You can expect to spend up to $2,000 per year on boat insurance if you live and dock in an area with frequent collisions or natural disasters.

Docking a houseboat in a region known for hurricanes and tropical storms will always be more expensive. Houseboat insurance costs more than a typical fishing vessel because it is used to house multiple people in many cases.

What Is The Lifespan of a Houseboat?

A houseboat can typically last between 20 and 30 years, depending on how well you maintain it. Houseboats that are regularly serviced can last as long as 50 years, but that is a stretch in most cases.

Sure, you can find old houseboats that are 50 years old, but it will be difficult to find the proper replacement parts to keep them going for that long.

It ultimately comes down to how well you maintain them and what the boat is constructed of in the first place. For example, houseboats typically last longer if you keep them in freshwater than in the ocean. Saltwater is rough on boats over time, especially if they are made out of aluminum.

Typically, boats that are primarily kept in freshwater require less maintenance than boats that you keep in salt water. A poorly-maintained boat made out of inferior materials than is mostly kept in saltwater will only last 20 years maximum in most cases. You can extend the life of your houseboat if you renovate it and routinely maintain it.

Where Can You Live in a Houseboat Yearround?

You can live in a houseboat year-round in many major U.S. cities, such as Miami, Los Angeles, and Portland. Lesser-known areas such as Hot Springs, Arkansas, and Paige, Arizona also have a large population of houseboats. These cities feature generous docking fees, insurance premiums, and beautiful bodies of water to dock at.

Some ports strictly operate on a seasonal basis, so it’s important to do research beforehand if you plan to live on a houseboat.

Can You Permanently Live on a Houseboat?

It is possible to permanently live on a houseboat, but that is fairly rare even in the boating community. Living on a houseboat is cheaper than living in a house, condominium, or apartment, but only by a small margin. You can save $200 or more per month living on a houseboat compared to a traditional structure.

People live in houseboats throughout the United States everywhere from Florida and Arizona to Washington and Oregon. Concerns such as vandalism and burglary keep some people from living on houseboats permanently. However, marinas generally provide security of some sort and most houseboat owners have an insurance policy to mitigate loss in that case.

So, How Much Does a Houseboat Cost?

Docking is a regular cost as well, and it costs $1,150 per month on average. Houseboats lose between 10% and 40% per month on average depending on the age and condition, so used models are much cheaper. As long as you don’t choose one with excessive amenities, it’s cheaper to live on a houseboat than the average apartment or house.

15 Best Liveaboard Marinas in California (Recommendations by the Pros!)

In California, you can live in an apartment, a traditional…

What Size Anchor Do I Need For My Boat? (Anchor Size Chart & Photos!)

We put anchors on boats to keep the vessel safe…

Tritoon Vs. Pontoon: What Is The Difference?

Buying a new boat is a daunting task because of…

Maldives on a Budget: 7 Day Itinerary!

How Much Does a Boat Lift Cost? (Cost Per Boat Lift Type!)

If you own a boat, then you already know it…