How Long Does It Take To Sail Across The Atlantic? (Where To Cross!) 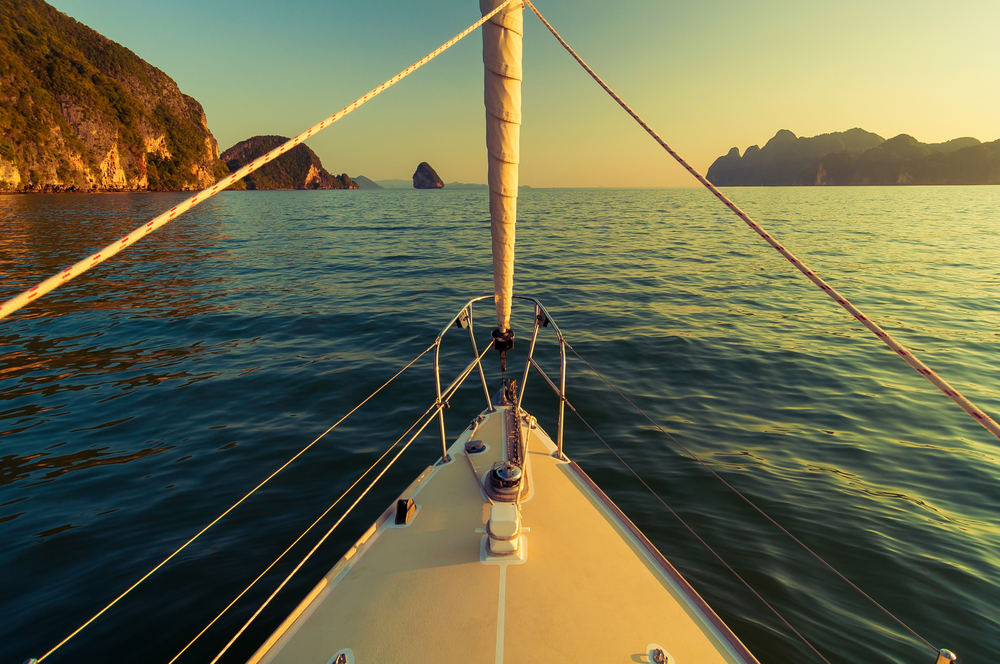 Do you dream of hopping aboard your sailboat, sailing across the ocean, and getting away from it all? It might sound like something out of a movie, but many people share this goal. But it’s a big endeavor that takes lots of planning, especially knowing how long it will take you to sail across the Atlantic.

It takes an average of 21 to 28 days to sail across the Atlantic Ocean on a sailboat. If conditions are favorable, you could do it in two weeks. However, it could take one month or a month and a half if the wind isn’t on your side. A cruise ship could cross the Atlantic in 6 to 8 days.

Many factors influence how long a transatlantic adventure will take you, including weather, your boat, and your sailing skills. If you’re curious, you can start learning more about this ocean adventure right here.

How Long Does It Take To Sail Across The Atlantic On A Sailboat?

On average, you can expect to spend three to four weeks sailing across the Atlantic Ocean on a sailboat. However, if everything goes right and the wind is favorable for the duration of your journey, you could do it in two weeks.

But this is assuming you are an expert sailor. It also assumes you have a fast and reliable boat (the average sailboat has top speeds of 10 miles per hour or 8.69 knots). Also, you likely would know some shortcuts and only plan to make a few stops.

You also need preexisting knowledge of the Atlantic and what it takes to sail across it. This feat is certainly not one you jump into and try. It takes lots of preparation, information, and skill.

Expect The Unexpected When Sailing Across The Atlantic

On the flip side, even if you’re experienced, various situations can add time to your journey. If the wind isn’t going your way for several days, it could extend your trip a week or more. In some cases, you might spend closer to 40 days sailing across the Atlantic.

You also must always figure out what to expect, as anything can happen on the open sea. Therefore, you can plan around an average of 21 to 28 days, but expect it to take longer. In other words, plan and pack supplies as if it were going to take you at least one month.

How Long Does It Take To Cross The Atlantic At 20 Knots?

If you’re traveling at 20 knots, roughly 23 miles per hour, you could cross the Atlantic in 12.5 days under favorable conditions. One knot is equivalent to moving one nautical mile or 1.151 miles per hour.

The Atlantic Ocean is approximately 3,500 nautical miles at its widest point (roughly 6,800 kilometers). However, you will not travel in a precise straight line when sailing. Instead, you will travel from one point to the next, making more of an S or zig-zag pattern.

Therefore, you will likely travel slightly farther than 3,500 nautical miles. Depending on your route, you’re more likely to travel between 4,300 and 4,700 nautical miles. Furthermore, you need to add time for breaks and stops.

How Long Did It Take To Sail Across The Atlantic in 1942?

Christopher Columbus sailed westward across the Atlantic, from Spain to the Bahamas, in 91 days starting on August 3, 1942. He was trying to find a direct route from Europe to Asia, but he was unsuccessful.

He would later make three more attempts over the next ten years, none of which would lead to Asia. Instead, he visited places like Hispaniola, the Americas, and he reached Panama on his last voyage in 1502.

Where To Cross The Atlantic

The Northern Passage takes you west to east and takes slightly longer than the Southern Passage. Precisely how long it takes you depends on the weather, your boat, and the tradewinds.

Typically, you would first need to reach the Caribbean, then sail to Bermuda. Bermuda is a popular port of departure for those sailing from the Americas to Europe.

The Southern Passage goes east to west and lasts an average of 26 days. Once again, you first need to sail to your port of departure, the most popular of which is the Canary Islands. People usually travel from Portugal to the Canary Islands, which is 750 nm and takes 5 to 7 days.

Next, sail to Cape Verde, which is 850nm and takes 5 to 8 days. From Cape Verde, you can continue to the Caribbean. This is the longest leg of the journey, at 2,700 nautical miles, and can take 21 days.

Once you add the distance from the Caribbean to your final port, you will travel over 4,300 nautical miles.

Keep in mind these are common routes, but you need to consider where you are going and plan. There are specific routes to take when crossing the Atlantic, and heading out without a plan will doom you before you leave port.

What Size Boat Would You Need To Sail Across The Atlantic?

The boat was named Father’s Day. It was his third attempt in 1993 (he had also tried in 1968). The boat was 5 feet, 6 inches on the first two attempts. Hugo cut two inches off the boat before setting out for the third time.

Every year, the Atlantic Rally for Cruisers is a favorite event for many sailors, with over 200 boats participating. The event involves going 2,700 nautical miles across the Atlantic. Boaters travel from Gran Canaria to Saint Lucia.

The boat requirements to participate state that boats must be at least 27 feet long and have a minimum two-person crew. However, most boats that enter are closer to 38 feet long. Depending on the weather, the ARC suggests 18 to 21 days for this voyage if you’re on a 40-foot-long boat.

Can A Yacht Cross The Ocean?

A large superyacht could cross the ocean if it has the proper range, but smaller yachts likely cannot. It all depends on how many nautical miles the vessel can handle before needing more fuel.

Many superyachts could handle the voyage easily, following specific routes and with the proper preparations. For example, the Azzam, the largest yacht in the world, is over 550 feet long. It can also reach top speeds of 33+ knots.

If the yacht can’t handle the necessary fuel load for the journey, it won’t be able to make it. Therefore, some people end up shipping their vessels across the ocean via specially-designed freighters.

How Long Does It Take To Cross The Atlantic On A Cruise Ship?

A cruise ship could sail across the Atlantic in 6 to 8 days in good conditions without any stops. A standard cruise ship travels at 20 to 25 knots; the average cruise ship is roughly 1,000 feet long.

However, a transatlantic cruise actually lasts much longer, typically about two weeks. This longer duration is because of the itineraries, which include stopping at different ports along the way.

When Is the Best Time To Sail Across The Atlantic Ocean?

The best time to sail the Atlantic is between November and February when the water is warmer, and there’s less chance of hurricanes. The trade winds are strong, between 15 and 25 knots, from late November through December.

This is the timeframe the Atlantic Rally for Cruisers recommends sailing (they use the southern route). When January approaches, the trade winds will grow stronger, up to 30 knots, when the high over the Azores moves further south.

These winds can make it difficult for recreational sailing. Therefore, keep this in mind when you plan your route. Sailing south of the Azores could be preferable instead of going across during this time.

What Do You Need To Sail Across The Atlantic Ocean?

You need sailing experience, knowledge of the ocean and routes, a reliable boat, expert skills, and proper supplies for a transatlantic trip. It takes a lot more than a dream and an adventurous spirit to make the trip successfully. In fact, setting out with little to no experience or planning could even be a fatal mistake.

You also want a knowledgeable and reliable crew to come with you. You’ll need enough food and supplies (think medical, basic toiletries, etc.) for everyone. If you plan to fish to supplement your food, you’ll need fishing gear, and so on.

You also need a budget.

How Much Does It Cost To Sail Across The Atlantic?

Sailing across the Atlantic Ocean is expensive, quickly adding up to over $50,000 or more if you rent the boat. Putting one price tag on this adventure is hard since so many factors go into the total.

Even with your own boat, you could spend $50 to $500 daily on fuel, depending on your boat’s size and motors. There are also costs for food, supplies, boat insurance, docking fees, and more. Docking fees can range from as little as $60 to over $1,000.

For your food, estimate between $20 and $50 per day per person. Once you start factoring in your insurance and other supplies, you can see how it adds up fast.

What If You Rent A Boat?

Of course, if you don’t consider yourself a sailor but want to have the experience, you could hire an expert to handle the sailing. Whether it’s on a sailboat or you charter a yacht, this will add significantly to your bottom line. Leasing a yacht capable of crossing the Atlantic could easily cost you almost a quarter of a million dollars per week.

If you don’t have your own sailboat and choose to rent one, it could cost you about $1,000 to $1,200 a day. This price range would be for a boat around 30 feet long. You’re looking at even more if you need to hire a captain.

Another option, if you’re willing and able, is to look for larger vessels about to make the trip. If the crew is shorthanded, you might be able to join for only a small fee to cover your food costs. If you attempt this, make sure the captain and crew you choose are experienced.

Sailing across the Atlantic could be the adventure of a lifetime if you prepare for it and know what you are doing. The voyage can take anywhere from two weeks to two months, depending on your experience, the weather, water conditions, and your boat. Typically, the larger the vessel, the easier your crossing will be.

The going recommendation is to use a sailboat at least 30 feet long, but 40 feet long is better. Cruise ships that average 1,000 feet long and go 20 to 25 knots can make the pass in 6 to 8 days. Superyachts could also easily cross the Atlantic if they can handle enough fuel for the trip.

No matter in what vessel you attempt to cross the Atlantic, you’ll need to follow specific routes. Sailing across requires careful planning, expert skill, and enough supplies to cover you for at least one month.

How Much Does a Boat Lift Cost? (Cost Per Boat Lift Type!)

If you own a boat, then you already know it…

How Much is Carefree Boat Club? (State By State Cost Guide!)

Boat clubs are an excellent way to get out on…

13 Types of Sailboat Hulls (Including Photos!)

A sailboat is only as good as the hull, and…

How Fast Does a Boat Go? (Including Speed By Boat Type Chart!)

Whether using your boat for transportation or recreation, you need…

Your boat seats encounter harsh external factors like saltwater and…

Every component of a sailboat affects the cost, handling, and…