Does it Snow in Virginia? (Average Accumulations in Winter Months!) 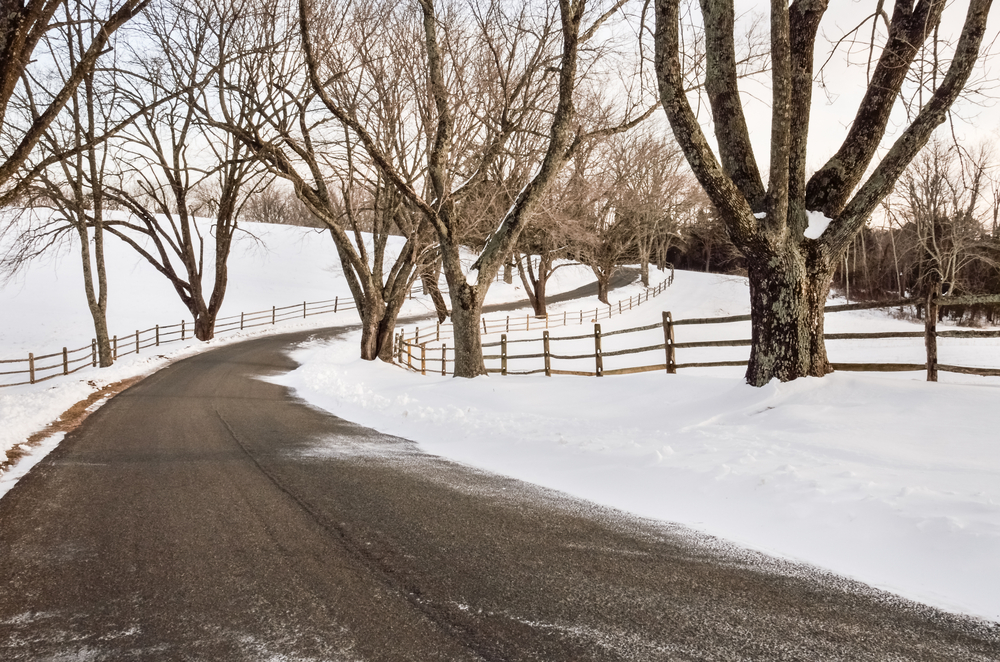 Virginia has some of the most pleasant weather in the 48 continental United States. The summers are almost always pleasant, although they can be humid. Winters are best described as mild with some cold snaps. Winters can bring snow to parts of Virginia, and the occasional winter storm can leave heavier accumulations.

Virginia can also experience extreme winter weather events. In January 1996, one of the worst blizzards occurred, dropping more than four feet of snow on much of Virginia. For the most part, winters in Virginia are some of the best times to visit, with several ski resorts operating and many places operating special winter event schedules.

When Does It Usually Snow in Virginia?

The sub-tropical climate, mountainous western geography, and location along the Atlantic coast give Virginia a varied climate. Virginia usually experiences its winter months from November to February. In some parts of the state, temperatures can drop to 18 degrees F ( -10 C) regularly. As arctic air sweeps in from the Northwest, the cold temperatures and humid conditions, snow is a common occurrence.

November marks the end of the fall season and the start of the winter season in Virginia. Areas along the eastern seaboard of Virginia will continue to experience mild temperatures that average 50 degrees F (10 C). Inland on the western side of the state, the Appalachian Mountains see winter-type conditions earlier since the elevations can reach above 5,000 feet above sea level.

November can be a spectacular time to visit Virginia. The forested areas in the west in the Appalachian mounts in early November are still showing their fall colors while the temperatures along the Atlantic coast are still moderate enough to allow pleasant strolls on the beaches.

Many people consider December the beginning of winter in Virginia. In some areas in the mountains above 3,000 feet, snow can begin to accumulate.

In some of the higher elevations, snow accumulations can reach 2.68 inches of snow which can often last for several days before it begins to melt and disappear. Along the coastal areas, the cooler weather and higher humidity often make the weather seem colder than the thermometer shows.

January is the coldest month of the year in Virginia. Temperatures statewide can average lows of 24.8 degrees F (-4 C). In some areas, the average high temperature rarely reaches more than 38.7 degrees F (3.7 C). Some cities in the Appalachian Mountains will see even colder temperatures on a regular basis.

Snow accumulations in the Richmond, Virginia, area will usually see about 3 days of snow in January. Cities further west, such as Bluemont, will enjoy about 6 days of snowfall in January. These snowfalls can last on the ground from 3 to 7 days, depending on the location.

In February, the weather in Virginia usually begins to moderate, turning warmer with more sunshiny days and less chance of snow. Many areas in the mountains will still see average temperatures nearing 27 degrees F (-1 C). However, daytime highs in these same areas will often begin to approach 43.2 degrees F (6.2 C).

What Place Gets Snowfall in Virginia?

The heavier snowfalls in Virginia tend to happen inland on the western side of the state. These areas in the Appalachian Mountains are higher in elevation and get the brunt of the snowfall in Virginia. The areas along the Atlantic coast tend to have more moderate weather and less snowfall.

If your travels take you to the capital of Virginia in the winter, you can experience a humid and sometimes very cold visit. January is the most likely time to see snowfall in Richmond. The average low temperature in Richmond is near 27.6 degrees F (-2.44 C) and is often accompanied by snow flurries.

Snowfall in Richmond rarely lasts for more than a day or two on the ground. On average, Richmond, Virginia, receives 7.2 inches (138 mm) of snow per year. If you are visiting Richmond, Virginia, in January, plan to have extra layers of clothing to accommodate the swings in temperature.

On the other side of the state, high in the Appalachian Mountains, is the village of Bluemont. Bluemont is a popular tourist destination, even during the winter months. Bluemont is only 722 feet above sea level, but even that slight amount of elevation can make a big difference. The temperatures in Bluemont in January often reach lows of 24.8 degrees F (-4 C) and rarely get above 38.7 degrees F (3.7 C).

Norfolk, Virginia, is home to one of the largest US Navy Bases in the United States. The location on the Atlantic Coast provides a sub-tropical climate with relatively mild winters. Norfolk typically averages 14. 88 inches (378 mm) of snow per year. January is typically the coldest month of the year in Norfolk.

Temperatures in January can range from highs of 38.7 degrees F (3.7 C) to lows averaging 24.8 degrees F (-4 C). Snow accumulations rarely last for more than two or three days. The proximity to the warm Gulf Stream currents in the Atlantic Ocean helps moderate the winter temperatures.

Can You Snow Ski in Virginia?

Snow skiing is a popular winter activity in Virginia. Four ski resorts keep the winter sports served during the winter months. These four resorts offer a wide variety of activities, from a warm lodge setting with great food and beverages to exemplary downhill and cross-country skiing, snowboarding, and snowmobiling.

Wintergreen Ski Resort is the largest ski area in Virginia. There are 26 slopes from beginning to advanced. Wintergreen Resort averages 34 inches of natural snowfall per year at the base of the ski area, which is at 2,512 feet above sea level.

You can enjoy one of the 8 lifts at the resort during the average 118 days of operation each ski season. Wintergreen resort also utilizes manmade snow to keep its slopes open and in the best possible condition.

Massanutten Resort is a true four-season destination in Virginia. Summer offers water-based fun at the water park. Golf and outdoor sports are the chief attractions during spring and fall. In winter, Massanutten offers 14 ski trails served by seven lifts.

The average natural snowfall in Massanutten Ski Resort is 35 inches. The resort can generate additional manmade snow on all of the runs to keep the resort operational. On average, Massanutten is open for 97 days per year for snow skiing. On average, you will experience low temperatures in the range of 25 degrees F (-3.8 C) to highs of 43 degrees F (6.1 C).

The five kilometers of slopes at Bryce Ski Resort are tailor-made for downhill skiing and snowboarding. The two ski lifts keep guests on the slopes to enjoy the slopes and the average snowfall of 30 inches per year. During the rest of the year, golfing, water sports, and mountain biking are some of the most active recreation opportunities.

Bryce Ski Resort typically receives an average of 8 inches of natural snow with each snowfall that occurs. Bryce Resort has the manmade snow-making capability to keep its slopes open even when mother nature doesn’t cooperate.

Where Does the Most Snow Fall in Virginia?

If you want to increase your chances of seeing snowfall in Virginia, you should make your plans to include Wise, Virginia. Wise is often referred to as the snowiest city in Virginia, and for good reason. Sitting at an altitude of 2,500 feet above sea level, Wise typically receives 52 inches of snow per year. This is much greater than the overall statewide average.

In January, the average low temperature is 22 degrees F (-5.5 C) so pack warm clothing for your mid-winter visit to Wise. Even in the summer, the temperatures are quite mild and remain pleasant during the hottest months of the year.

Do You Need a Passport To Go To St. Croix?

St. Croix is possibly the most unique of the 3…

Do You Need A Passport To Go To Catalina Island? (Find Out Now!)

Nothing in the world can beat a relaxing vacation on…

New Mexico is a unique destination in the United States…

Do You Need a Passport To Go To Niagara Falls?

Niagara Falls is commonly referred to as the seventh wonder…