Does it Snow in Mexico? (Snowfall Accumulations & Average Temperatures!) 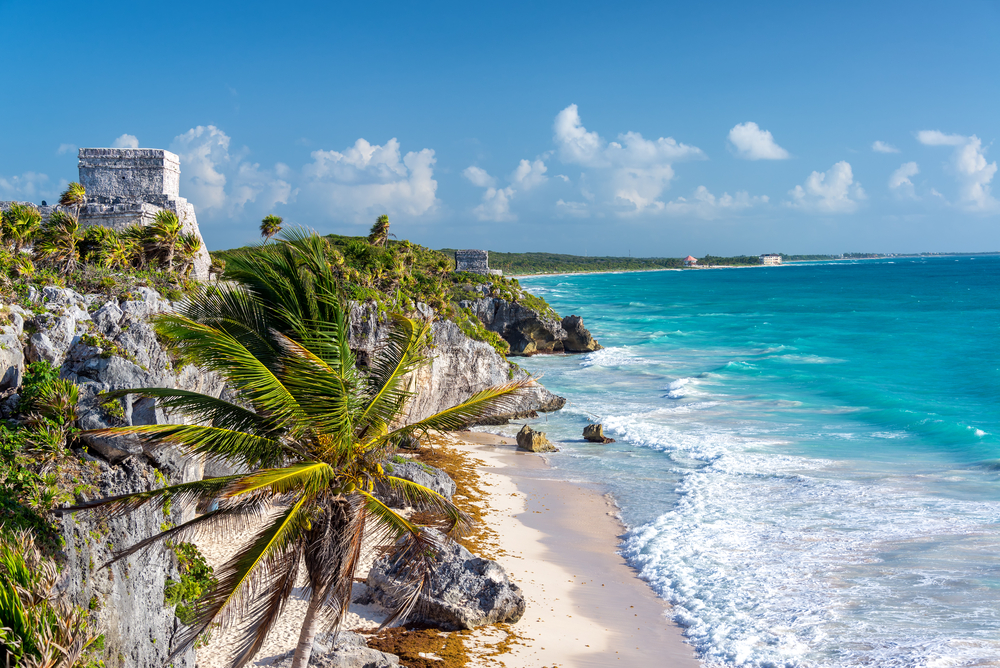 Mexico is only about one-fifth the size of the United States. However, Mexico has a much more varied climate than the US. The Tropic of Cancer effectively divides Mexico into temperate and tropical zones. Its length from north to south also includes large coastal regions and some extensive elevation changes. Yes, it does snow in areas of Mexico on a regular basis.

Snowfalls in Mexico usually happen in the northern parts of the country. Of Mexico’s thirty-two states, twelve routinely experience snow during winter. Most of these areas have mountain peaks and volcanos above 10,000 feet, some of which can receive 10 inches or more of snow yearly. Typically, snowfalls in Mexico occur from December to February.

Some areas in Mexico receive snowfall every winter. However, snowfalls are usually confined to these higher elevations. The most popular beach areas have sub-tropical climates, which make snow unlikely. Even inland areas such as Mexico City rarely see snow, which makes Mexico a popular tourist destination year-round.

Where Does it Snow in Mexico?

Mexico is a large country. More importantly, it is long and has both eastern and western coastlines that tend to moderate the climate along its entire length. Areas south of the 23rd parallel are generally considered to be sub-tropical climates, making snow rare, even at higher elevations. North of the 23rd parallel, the climate is more temperate, and snow is more common.

There are certain places in Mexico that receive snow every year. The mountainous areas of northern Mexico almost always see snowfall. The peaks higher than 10,000 feet see snow caps every year. In some areas, winter sports such as skiing, tubing, and snowboarding are popular, and there are several fantastic winter resorts to enjoy.

In general, Arteaga has a mild climate that sees average annual temperature highs of 65 degrees F (18.3 C) to lows that average 42 degrees F (5.5 C). However, don’t let these temperature annual averages fool you. This town is nestled in the foothills of the Sierra Madre Mountain range, where snowfalls are common at higher elevations.

In particular, the Bosques de Monterreal near Arteaga is known for its snow and winter sports activities. This area is often called the Alpine of Mexico. The development at Bosque de Monterreal is the only commercial ski area in Mexico. You can ski from December to February on natural snow and the rest of the year on artificial ski slopes.

Mexiquillo is a treasure trove of unexpected delights, including temperate forests, waterfalls, and high mountain peaks. The mountain peaks and the elevation make Mexiquillo one of the places in Mexico where you can usually find snow during the winter months. For unspoiled beauty, you can visit the virgin forest at Pueblo Nuevo Natural Park.

Snow often dusts this large natural reserve during December and January, turning the forest into a magical wonderland begging to be explored. Just remember that there are no facilities or services at the park. It will be just you and the quiet solitude of the area.

Zacatecas borders the state of Durango and also has vast areas of the Sierra Madres Mountains. The town of Sombrerete traces its history back to Spanish Conquistador Juan de Tolosa. If you visit Sombrerete and the nearby Sierra De Organos National Park in winter, be sure to pack your warm clothing.

The peak of the fourth highest mounting in Mexico is Nevado de Toluca, standing 15,390 feet tall. The Mexican state of Mexico is also home to Mexico City. This makes it the most populous state in Mexico. The mountain sits west of Mexico City, where the high altitude and northern location almost guarantee snowfall in this area every year.

A winter trip to Nevado de Toluca in winter promises not just snow accumulations but also some extreme conditions. The average winter low can reach 29 degrees F (1.3 C) while the average highs only reach 44.6 degrees F (7 C). However, on the summit, if you choose to make the hike, there have been recorded lows that reach 14 degrees F (-10 C).

Does it Snow in Mexico City?

Mexico City very rarely receives any snow at all. The altitude and location of Mexico City keep the climate temperate and moderate most of the year. There may be an occasional dusting of snow in the hills surrounding Mexico City, but the urban areas of this sprawling metropolis very rarely see any white stuff.

However, in 1967, Mexico City did experience a significant snowfall that left several inches of snow accumulation across the city. Historical reports speak of the beauty of the snow, but most people who experienced the event only remember how badly prepared Mexico City and its inhabitants were for this kind of weather event.

Does it Snow in Cancun, Mexico?

Records show that there has never been a measurable snowfall in Cancun, Mexico. This popular beach resort enjoys a favorable climate year-round. Even in the winter months, the temperature rarely falls below 69 degrees F (20 C), while daytime high temperatures can reach 94 degrees (34 C).

The near sea level altitude, the warm Gulf of Mexico waters and the southern latitude almost guarantee balmy and comfortable year-round temperatures with no chance of snow falling in Cancun, even during the coldest months.

Which Mexican States Get the Most Snow?

Mexico has 32 states, of which 12 routinely get snow. Most of these states are in the northern part of the country and have mountainous areas. Those with peaks higher than 10,000 feet (3014 meters) get the most snow on average. In some areas, snow accumulations in the mountains can exceed 25cm (9.8 inches). However, access to these areas is almost impossible.

In the state of Veracruz along the Trans-Mexican Volcano Belt lies Pico de Orizaba. This is the highest peak in Mexico and the third tallest mountain in North America. The peak is 18,406 feet above sea level (5,610 meters).

Pico de Orizaba has year-round snow accumulations and is one of the few peaks in Mexico that has an active glacial population. Most of these accumulations of snow and large glaciers are on the northern side of the mounting, which receives less solar radiation. Getting to the snows on Pico de Orizaba requires mountaineering experience and equipment.

This volcanic mountain straddles the borders of three Mexican states, Puebla, Morelos, and Mexico. Sitting in the central region of Mexico, Popocatepetl is the second-highest peak in Mexico. The mountain lies 43 miles (70 km) southeast of Mexico City. Until recent years, Popocatepetl had glaciers at its peak and commonly had a year-round snow cap.

However, climate change has ended the glaciers, but the mountain top still often has snow cover most of the year. Getting to the snows on Popocatepetl is difficult and involves an arduous hike over some rough terrain but is doable, especially from the Iztaccihuatl-Popocatepetl National Park.

Iztaccihuatl translates from the language of the Nahuatl as “White Woman.” The profile of the three peaks of this mountain is said to resemble the head, chest, and knees of a sleeping woman. This is the third-highest peak in Mexico and is the lowest peak that has year-round snow accumulations.

Izataccihuatl has an altitude at the peak of 5,286 meters (17.343 feet). This set of peaks is part of the Trans-Mexican Volcano Range but has not had an eruption for an estimated 11,000 years. Iztaccihuatl is often visible from Mexico City when atmospheric conditions are good.

The fourth highest peak in Mexico sits within the state of Mexico. The peak is 15,223 feet above sea level (4,640 meters). This altitude and the central location in Mexico keep temperatures at the peak low enough that snow has been known to fall in every month of the year.

This extinct volcano is surrounded by the Nevado de Toluca National Park. Access to areas with snow accumulations may be restricted due to archeological studies and a lack of maintenance for the roads.

Are there Ski Areas in Mexico?

There is only one commercial ski area operating in Mexico. Bosque de Monterreal is near the city of Artega, Coahuila, Mexico. This ski resort sits in the Sierra Madre Mountains and is surrounded by pine forests.

The resort is a year-round facility with a variety of both winter and summer activities. Natural snow can be spotty. However, the resort has the equipment to make manmade snow when temperatures are favorable to ensure the resort has skiing available. A year-round ski run is also on site.

Why Are Some Beaches in Cabos Not Swimmable? (Dangers & Safe Areas!)

Rip tides are a natural ocean occurrence worldwide, and they…

Cozumel, Mexico, is a beautiful island off the coast of…

Cancun is a popular vacation destination on the Yucatan Peninsula…

Mexico has been a tourist destination for travelers throughout the…

Do You Need A Passport To Go To Puerto Vallarta? (Find Out Now!)

Well known for its incredible beaches and nightlife, Puerto Vallarta,…

Do You Need A Passport To Go To Cozumel? (By Land, Sea, or Air!)

Cozumel, Mexico, is a stunning beach destination that offers plenty…

Do You Need A Passport To Go To Cabo?

Cabo San Lucas is a popular spot located at the…

Do You REALLY Need A Passport To Go To Rocky Point Mexico?

Rocky Point is close enough to the U.S. border in…