Does it Snow in Hawaii? (Average Accumulations & Temperatures!) 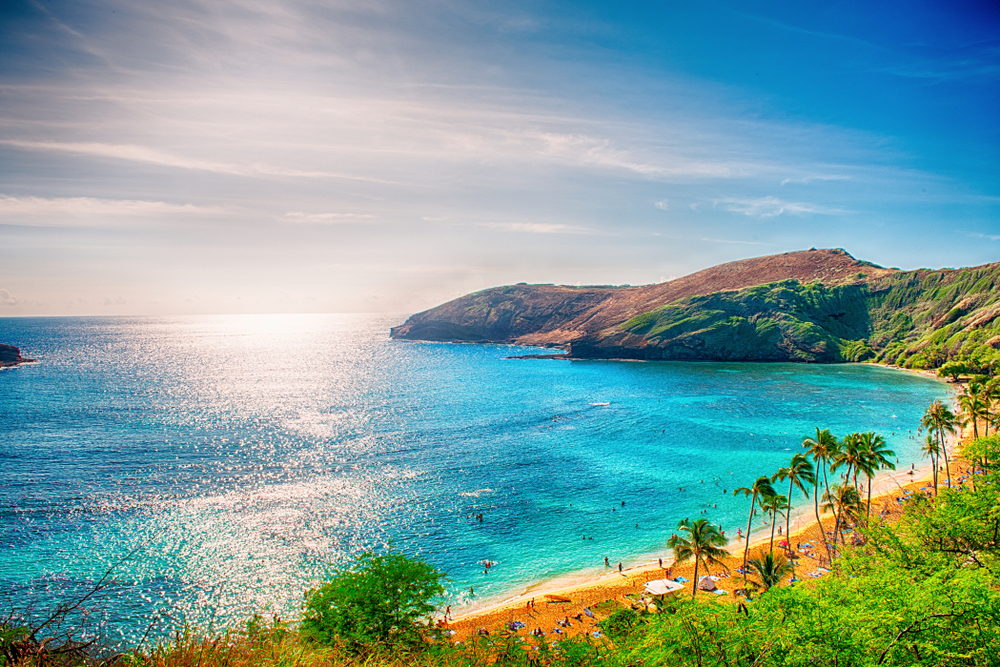 Hawaii typically brings a vision of a sunny tropical paradise where glistening sand beaches, blue water, and warm temperatures are the norm. What many travelers don’t realize is that parts of Hawaii routinely get snow during certain portions of the year. In fact, it is possible to go from basking in the warm sun on the beach to having a snowball fight with only a few hours of travel time in between on some of the islands.

Snow in Hawaii usually occurs in the mountains above 10,000 feet elevation. These heights can be found in several places, including Haleakala, Mauna Loa, and Mauna Kea. Other places on the islands can get cold but rarely receive snowfall, such as Hualalai, Pu’u Kukui, and Kaunu o Kaleihoohie. The winter season on the peaks that get snowfall happens between December and February.

Despite the overall belief that Hawaii is a state dominated by sunshine, tropical temperatures, and rain, there is a wide variety of ecosystems and climate zones on the islands. The variations can occur within a few miles of each other and offer dramatic differences in environments that offer some startling contrasts.

How Cold Does It Get in Hawaii?

The average temperature depends a lot on where you are on the islands and at what time of year you are there. For example, Makena Beach State Park on Maui experiences highs that can reach 88 degrees F (31 C) to lows averaging 72 degrees F (22 C).

Only a 45-minute drive away is Haleakala Peak which usually sees highs of only 66 degrees F (19 C) to lows that can reach 30 degrees F (-1 C) and often experiences snowfall.

For all practical purposes, you can visit Hawaii, or live there for that matter and never experience anything but the balmy tropical weather for which Hawaii is famous. However, if you need a cooler weather fix or a bit of snow, that can happen as well.

Which Mountains in Hawaii Get Snow?

Finding snow in Hawaii does take some diligence. The only places where snow falls with any regularity are on the mountain peaks above elevations of 10,000 feet. There are three locations where you can expect to find snow, usually during the winter months of December through February.

Mauna Kea is at the heart of the island of Hawaii. At its tallest point, this summit is 4,207.3 meters (13,803 feet) above sea level. This is the tallest peak in the Hawaiian Islands and receives frequent snowfalls.

What many people don’t realize is that overall, Mauna Kea, because it sits in the Pacific Ocean, is actually taller than Mount Everest when measured from its base on the sea floor to its peak. Mauna Koa is the location of one of the worlds leading astronomical observatories, where 11 countries operate 12 different telescopes.

The astronomical observatories on Mauna Kea are the largest in the world. The first telescopes were built on the summit after the access road was completed in 1964. Because the top of this mountain is considered sacred space by native Hawaiians, the observatory construction still creates debate.

This dormant volcanic peak is located on the island of Maui and is often referred to as the East Maui Volcano. This volcano created more than 75 percent of Maui when it was erupting.

At its peak, this mountain is 10,023 feet above sea level and is called Pu’u ‘Ula’ula (Red Hill). The summit overlooks a massive, depressed crater that is 7 miles across and 2 miles wide. The nearly sheer walls of the crater descend more than 800 feet.

The peak of Haleakala regularly gets measurable amounts of snowfall. The snow accumulation rarely lasts for more than a few days. There is no easy access to the summit of Haleakala so those who have experienced snow on this mountain are few.

Experts consider Mauna Loa to be an active volcano that remains destructive today. The most recent swarm of eruptions on Mauna Loa eruptions occurred in 1984. However, Mauna Loa remains seismically active.

The USGS monitors this volcano constantly. The summit is officially listed as 13,681 feet above sea level, but seismic activity can change this in a matter of minutes.

Highs on Mauna Loa’s peak usually average around 50 degrees F (10 C), and lows can reach 25 degrees F (-4 C). Snow accumulations on the summit happen 1 to 3 times a year. Unfortunately, due to the volcanic and seismic activity of this mountain, only geologists and researchers can experience snow on Mauna Loa.

Which Hawaiian Peak Gets the Most Snow?

Mauna Loa is the largest of Hawaii’s snow peaks. At nearly 13,600 feet above sea level and with the way the huge mountain lays with the trade winds, this mountain gets more snow than the other two peaks combined.

A typical year on Mauna Loa sees only about 2.3 inches of snowfall. Hardly enough to sustain any serious winter sports. However, in 2016 an unusually severe winter storm dropped more than two feet of snow on Mauna Loa just in time for Hawaii to experience a white Christmas at least on the top of the volcano.

The other two mountains that regularly get snow receive much less each year. Most snowfall on these peaks is considered just a dusting and usually disappears in a few days as the sun warms the surrounding volcanic earth.

Related Read: 50 BEST Things To Do In Waikiki

How Often Does Hawaii Get Snow?

During an average winter season, the three mountains in Hawaii that accumulate snow see the white stuff 1 to 3 times. Don’t expect to go to Hawaii and see white-capped mountains. The snows are infrequent and occur only during the winter months between December and February.

The amount of snow and when it falls is entirely dependent on conditions being just right for the snowfall to occur. The winds must be in the right direction, the correct temperatures at the peaks, and the amount of humidity in the ocean winds just right. More often than not instead of snow, the mountains are just cloaked in clouds and heavy mist.

Is Snow Rare in Hawaii?

By all means, yes. Snow only falls in three locations and then only occasionally. The tops of the three mountains in Hawaii are the only locations where snow falls and then only when conditions are perfectly suited. This makes a Hawaiian White Christmas a very rare event indeed, and only to be enjoyed at a few remote and hard-to-reach locations.

Many people who visit Hawaii regularly are unaware that Hawaii gets snow. Most are happy to enjoy the sun, surf, and tropical weather without cold and snow.

Does Maui Ever Get Snow?

Maui does get snow in a sense. Haleakala Peak on the island of Maui is one of three mountains in the island chain high enough to see snow regularly. So, it can be said that it does snow on Maui.

However, you must venture nearly to the summit of Haleakala when the snow does happen to see one of these relatively rare events. It is reasonable to assume that most Maui residents have never experienced snow on the island.

Can You Snow Ski in Hawaii?

When the weather permits and the snow cooperates, you can enjoy some winter sports at the summit of Mauna Kea. Just be advised that there are no ski lifts or other amenities that most skiers expect on a winter skiing holiday.

You will need to provide your own equipment and transportation to the top of the mountain if you expect to ski or snowboard. Many locals simply bring their boogie boards from the beach and use it on the snow. It is also suggested that you rent a 4-wheel drive vehicle to get to the top when there are snow accumulations on the mountain.

Many people ski all the way down the mountain so plan on one member of your party driving your vehicle back down the mountain to pick you up. There is no ski patrol so if you get injured, help may take a while to reach you on the slopes.

What Causes the Snow in Hawaii?

For snow accumulations to happen at the peaks of the three tallest mountains, a particular weather pattern must be in effect. This weather pattern is a low-pressure system that the locals commonly refer to as a “Kona Low.”

Typically, these massive low-pressure systems develop northwest of Hawaii during the winter months and when they reach the islands the weather system can bring snow to the tops of the peaks.

These weather systems can also bring heavy storms with high winds, and intense and sustained rainfall which often results in severe local flash floods. Many of the slopes of the mountains become unstable with the large amounts of rains and often landslides are reported. You may also expect power outages when these storms occur.

Hawaii – A Land of Surprises

Yes, Hawaii is a tropical paradise. It also offers some surprises in the form of snow falling high above the tropical oasis on the mountains. What could be more fun than spending the morning basking in the sun on a tropical beach and heading out of a round of snow skiing in the same afternoon?  It is possible in Hawaii.

Snorkeling is a favorite activity for many travelers when they…

50 BEST Things To Do In Waikiki (Fun & Unique Attractions!)

When you think of paradise, do you envision sandy beaches…

Do You Need A Passport To Go To Key West? (Find Out Now!)

Key West is equally well-known for its gorgeous views and…

Does It Snow in Georgia? (Average Snowfall & Temperature)

Don’t head to Georgia expecting to find a whiteout blizzard.…