Does It Snow in Georgia? (Average Snowfall & Temperature) 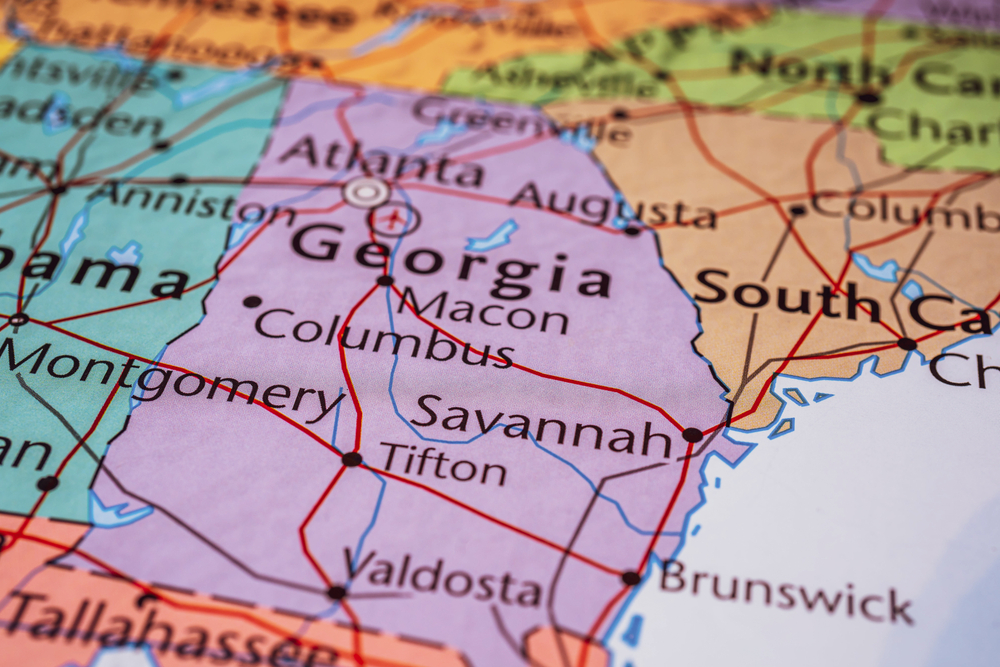 Don’t head to Georgia expecting to find a whiteout blizzard. The southern latitude of this US state makes that highly unlikely. However, if you time your visit right, you might find yourself treated to a winter wonderland. The chances of encountering enough snow to do more than lightly dust the ground are best in the northern mountainous regions of the state.

Georgia’s typical statewide average is one inch of snow per year. However, this amount can vary greatly from region to region. Atlanta, Georgia’s largest city, averages 1.4-inches per year. Other areas often receive up to 5.4-inches of snow per year. Areas along the gulf coast may only see traces of snow infrequently every few years.

Georgia is a state of contrasts. You can find as much variation in climate as you do in the culture. There are opportunities to experience snow in Georgia in some unique settings that range from the ultra-modern urban culture of Atlanta to the feel of a Bavarian alpine village in Helen, Georgia.

Where Can I Find the Most Snow in Georgia?

Typically, the further north you go in Georgia, the more likely you are to encounter snow. Blizzard conditions are rare even in the most northern parts of the state with the highest mountains.

The last reported snowstorm that qualified as a blizzard happened in March 1993. Your chances of encountering snow in Georgia are best in these towns and cities.

Dahlonego, Georgia, sits nestled near the Blue Ridge Mountains, not far from the border with Tennessee. The highest point in Dahlonego is Crown Mountain, whose peak is 1720 feet above sea level.

Historically, Dahlonego gets an average of 5.4-inches of snow per year. Typically snow falls in Dahlonego during the months of December through March, with January getting the most snowfall,

With an average altitude of only 659 feet above sea level, Calhoun, Georgia, enjoys a moderate temperature year-round. Its location in a river valley helps maintain this climate which can vary from summertime highs in July of 90 degrees F (32 C) to January temperatures that can near 28 degrees F (-2 C.)

Snowfalls in Calhoun typically occur from December to March, with the most snow happening in January, when some of the coldest temperatures occur. The average snowfall in Calhoun in January is 1.5-inches, Overall, Calhoun, Georgia, averages 3.2 inches of snow per year.

Just 27 miles from Atlanta, Kennesaw, Georgia, is a bustling suburb that boasts a lively culture and a mild sub-tropical climate. However, Kennesaw is known to see snow a few days of each year, usually from December to February. Snowfalls in Kennesaw rarely last for long. The average length of snowfall in January is only half a day.

Typically, Kennesaw gets an average of 2.5 inches of snow per year. The majority of this snow usually happens in January, which is historically the coldest month of the year. Temperatures in Kennesaw in January can range from highs of 51 degrees F (10.5 C) to lows averaging 34 degrees F (1.1 C).

Does it Snow in Atlanta?

Atlanta usually enjoys a rather temperate climate. Despite the nickname “Hotlanta,” this large metropolitan area is not the continually hot sweltering place some people claim. It is true that the summers can be hot and humid, but Atlanta enjoys 3 other very distinct seasons as well.

Winter in Atlanta typically is the dry season. Average temperatures in December range from highs of 55 degrees F (13 C) to lows that average 37 F (4 C). Atlanta will see an occasional dusting of snow and may suffer through some freezing weather which can make travel treacherous for a few hours. Typically, snowfalls average 2.9 inches per year.

How Much Snow Does Savannah, Georgia Get?

Don’t go to Savannah, Georgia, expecting to see snow. Savannah’s location on the gulf coast makes the climate more tropical than temperate. The humidity is usually quite high and the coastal location ensures sub-tropical temperatures most of the year. Due to these conditions, the average annual snowfall for Savannah is zero.

On the other hand, Savannah is not immune to rare occurrences of extreme cold weather. In 1985 an arctic surge that swept across the United States dropped the temperatures in Savannah to 3 degrees F (-16 C ) for a short period. There was some ice accumulation, but even at these extremes, no snowfall was recorded.

When Does It Snow in Georgia?

Being in the Northern Hemisphere, winters in Georgia are usually considered to be between December and March. These months typically see the most snowfall where it occurs. There are reports of occasional snow accumulations as early as October in some northern regions of the state, but these tend to be rare.

If you want to experience Georgia snow, plan your visit for January, the month that experiences the most average snowfalls. However, picking your place is just as important as picking your time to see snow in Georgia.

Where To Go to Find Snow in Georgia?

For the most part, snow accumulations tend to occur in the most northern portions of Georgia. The areas furthermost away from the gulf coast tend to have cooler winter months. This is a key factor in snowfalls in these regions.

Another factor to consider is elevation. The northern parts of Georgia are along the foothills of the Blue Ridge Mountains. The higher elevations this brings to some areas contribute to a greater opportunity for snow to develop.

There are some areas of Georgia where elevations exceed 1500 feet above sea level, and these are probably your best bet for a snowy Georgia holiday.

What is the Most Unique Place For a Georgia Snow Experience?

Without a doubt, if you can time your visit right to Helen, Georgia, you will experience something almost unimaginable. Helen, Georgia, during any time of the year, looks like something from a Bavarian travel guide. You will swear that you have been transported thousands of miles to the quaint cobblestone streets of a Bavarian Mountain village.

Helen, Georgia, typically averages 1.5 inches of snow per year. However, when it does snow in this Appalachian Mountain German village, it transforms the scene into something magical. The rest of the year, the climate in Helen is very mild and temperate, making this an ideal place for a mountain getaway.

Can I Go Snow Skiing in Georgia?

There are eight snow ski facilities in Georgia. The most highly rated of these ski resorts are located in the northernmost parts of the state and may not operate continually because of a lack of snowpack. Check with the resort before you plan a snow skiing trip to Georgia.

Cannon Mountain Ski Resort is located in northern Georgia near the Tennessee border. The resort itself sits at an elevation of about 2,100 feet above sea level. The top of the highest ski run is 7,100 feet and is served by a ski lift. There are 7 ski runs and 37 miles of cross-country ski trails to enjoy.

Cannon Mountain usually averages 160 inches of snowfall per ski season and maintains an average base depth of 13 to 17 inches of snow. Opening dates are subject to snow conditions, so it is wise to check before planning a trip.

Not the highest but perhaps the largest and most popular ski area in Georgia is Peek’n Peak. This resort is located near the Tennessee border in northern Georgia. The resort is nestled in the Appalachian Mountains at an altitude of 1,400 feet; the highest elevation in the ski area is about 1,800 feet, for a total downhill drop of about 400 feet.

Peek’n Peak averages 105 inches of snow per year. However, about 85 percent of its snow base is manmade snow. This allows the 27 runs and 9 lifts to operate during most of the winter months. The ski runs at Peek’n Peak are popular with intermediate and beginning skiers.

The highest ski resort in elevation is Pebble Creek, located in Gwinnett, Georgia, about 2 hours north of Atlanta. The resort itself lies at an elevation of 6,300 feet, making it the highest resort in Georgia. The highest run served by a ski lift reaches 8,560 feet. Three lifts serve the ski runs at this resort.

Pebble Creek receives an average of 136 inches of snow per year and maintains a base of 13 inches during the season. Much of this snowpack is manmade to ensure the resort can operate continuously during the ski season. Check local conditions on a trip-by-trip basis for the best information.

Yes, It Does Snow in Georgia

Depending on the location you choose, you can find snow in Georgia; you may even find some winter sports such as snowboarding, downhill skiing, and cross-country touring to enjoy.

On the whole, Georgia enjoys a temperate climate. Unless you move north to the higher elevations, your chances of experiencing snowfalls in Georgia are slim.

Georgia is a naturally beautiful state. One way to experience…

Georgia is a country with plenty of delicious food, stunning…

With 100 miles of trout streams and hundreds of miles…

Georgia is a beautiful state that is home to many…

Mention Hawaii, and most people think of beautiful beaches, sunshine,…

U.S. Virgin Islands Travel Requirements: Do You Need a Passport?

The U.S. Virgin Islands are a hot spot for tourists…