Can You Vape In A Hotel Room? (Hotel Policies & Restrictions) 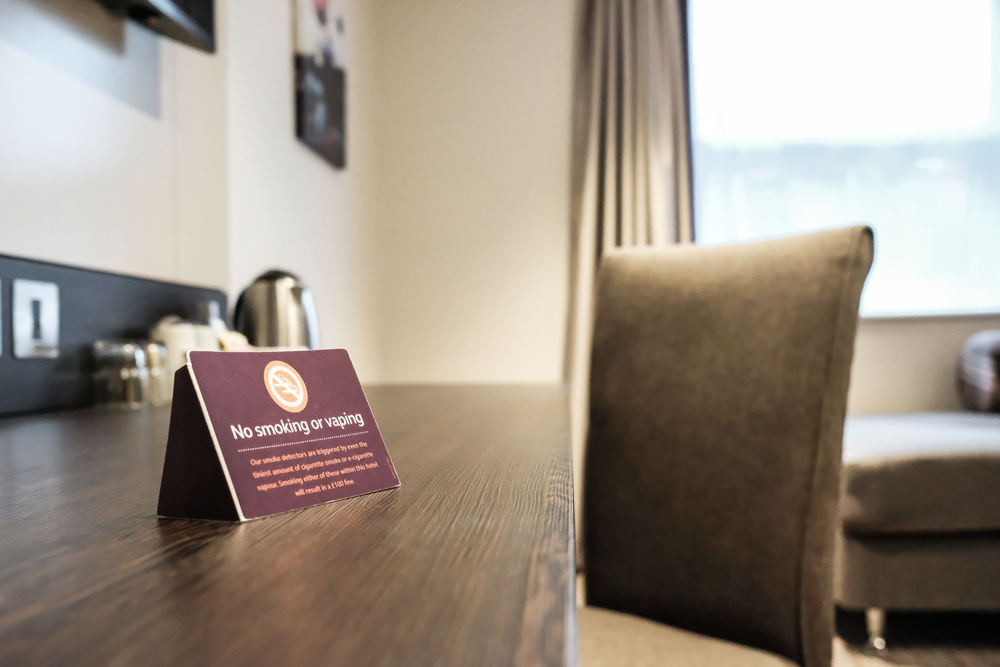 Vaping has become more of a social norm than ever before. If you have switched from tobacco products to vaping, you must be commended for your choices. However, not everyone recognizes that the switch you have made is either healthy or acceptable. This is particularly true when it comes to vaping in hotel rooms.

Most hotels equate vaping with smoking when it comes to interpreting their policies on smoking in hotel rooms. By and large, vaping is only permitted where smoking is permitted. Some hotels still have smoking-designated rooms where vaping is acceptable. Many hotels, and other businesses, restrict any smoking or vaping to areas outside the physical structure of their facility.

Your personal feelings on the vaping versus spiking issue are not the question. Hotels must set rules and policies to facilitate their operations. Vaping is still largely equated with smoking and is banned unless specifically stated in the policies, procedures and use rules of the hotel. Running afoul of these rules can have some long-term detrimental effects on your travel plans.

Can I Vape in a Designated Smoking Room?

If your hotel room is designated as a “Smoking Room,” typically, you can vape to your heart’s content in the room. The one caveat here is if the hotel specifically prohibits vaping as opposed to smoking.

This is a rare prohibition, but a few hotels do distinguish between vaping and smoking. If there is any doubt about the policy, ask before you make a reservation or arrive at the property.

Why Can’t I Vape in a Hotel Room?

When queried, hotels offer several reasons why they restrict smoking and vaping in hotel rooms. The most prevalent answer is that so many people object to staying in a room where smoking is allowed. Cultural norms have shifted, and smoking is no longer an acceptable behavior tolerated by many people. Hotel operators tend to categorize vaping as a form of smoking.

Related Read: Can You Bring Vapes on a Plane?​

Can The Hotel Tell if I Vape in a Non-Smoking Room?

You may not notice the tell-tale odors that vaping can leave on furnishings, wall coverings, and carpets. However, trained housekeeping personnel will be aware of these lingering odors and signs well after you are gone. You may think that scent of your vanilla latte vape isn’t objectionable, but for the hotel and its staff, it is immediately recognizable as a sign of vaping.

There are other means used by some hotels to sniff out vaping or smoking in areas where it is prohibited. You can be sure that if you vape in a non-smoking area of your hotel, someone will eventually notice.

How Does a Hotel Know If I Vaped in a Non-Smoking Room?

The usual method of detection is the trained nose of the housekeeping personnel who clean your room on a daily basis. Hotels routinely hold training sessions for housekeepers and maids to keep them alert about identifying prohibited behaviors in their hotel rooms.

There are also new technologies that some hotels are installing designed to sense vaping. The equipment operates much like a traditional smoke detector and can alert the hotel staff when it senses vaping happening in an area where it is prohibited.

Related Read: Can You Bring Puff Bars on a Plane?

What Can Happen if I Am Caught Vaping in a Non-Smoking Hotel Room?

Hotels use a number of methods to encourage their customers not to vape in non-smoking hotel rooms. Perhaps the most common is the addition of a cleaning fee to your room charge if you are caught vaping in a non-smoking room. This additional cleaning charge can run from $200 to $300 dollars per night in some cases. This can add a stiff increase in your hotel bill.

Some hotels maintain a customer database, and if you are caught vaping multiple times in a non-smoking area, the hotel can put you on their blacklist and effectively ban you from renting a hotel room at any of their properties. This is an extreme and rare happening, but the possibility does exist.

Related Read: Can You Live In A Hotel?

Will Vaping Set Off Smoke Alarms?

Contrary to popular belief, vaping can set off hotel smoke alarms as easily as regular cigarette smoke. Most smoke alarms operate by detecting particulate matter in the air. It doesn’t make a difference to the smoke alarm if the particulate matter is ash from a burning cigarette or vapor particles from a vape machine. The alarm will still sound, and you may receive an uncomfortable visit from hotel security and the local fire department.

A few smoke alarms use different technology for detection, and vaping may escape those types of alarms, but it is often impossible to tell what type of equipment is installed. The best option is to assume that the smoke detector in your hotel room can be activated by your vaping.

Are There Such Things as Vape Alarms?

There are now companies producing sensors that are designed specifically to detect vaping. If a hotel knows that its smoke alarms are not sensitive to vaping, it may elect to install special sensor equipment in non-smoking rooms and areas of the hotel.

Some of the newest technology can also detect carbon monoxide, loud noises, and other things that can threaten the safety or peace of hotel guests. Hotels put a lot of emphasis on providing space that is free from distractions or unsafe practices in their hotel rooms.

Related Read: How Late Can You Check Into A Hotel?

Are There Ways To Vape Without Setting Off An Alarm?

The easiest and safest way to vape without setting off an alarm is not to vape in an area where smoking or vaping is prohibited, including your hotel room. If you decide to vape in your non-smoking designated hotel room, be prepared to suffer the consequences if you get caught. Otherwise, there are some ways you might mask the evidence of your vaping.

Some travelers report that slipping a plastic shower cap, plastic bag, or rubber glove over the smoke detector will prevent it from detecting the vape. There is one caveat with this method. In many jurisdictions, it is a crime to alter, defeat, or destroy and smoke detector in a hotel. If you are caught, you might be issued a citation or worse, plus any civil damages the hotel wants to impose.

You might try booking a hotel with a balcony. Often smoking and vaping are allowed in outside areas of the hotel. This may or may not include balconies, but at least you aren’t inside where the smoke alarm might be triggered.

Are There Local Laws and Ordinances?

There may be local laws and ordinances that affect when and where you can vape. Many jurisdictions, like hotel companies, lump vaping in with smoking when it comes to enforcement. In these areas, your risk running afoul of the local law enforcement if you vape in your hotel room or an area that is designated as non-smoking.

In most cases, the consequences of getting caught are a misdemeanor, much like getting a traffic ticket. While it seems like nothing more than a minor irritation, remember that the fines can range up to $2,000 in some jurisdictions.

What Are The Long-Term Implications of Getting Caught?

Several long-term consequences may accompany getting caught vaping where you aren’t supposed to vape. The hotel may impose a stiff cleaning fee of up to $300 per night of your stay in addition to your room charges.

The hotel also has the right to ask you to leave immediately. This can put a real damper on your travel plans. Remember, you are there as a guest. Even though you paid for the room, if you knowingly violated one of the house rules, that is a legal means for the hotel to toss you out.

Most large hotel chains and some independent hotel organizations maintain blacklists. If you get put on a blacklist for repeatedly or obnoxiously violating hotel rules, you will effectively be banned from staying at any hotels in the chain. This might limit your travel planning in some areas.

Lastly, there is always the risk of being charged with violating a local health and safety ordinance, which can get you a citation and a hefty fine from the local authority.

Only you can judge whether the reward of vaping is worth taking the risks that you may face. It is easy to find workarounds that add minimal effort to your vaping habit. It is inconvenient to leave your hotel room for a permitted area but is the inconvenience worth the risk of a visit from hotel management, the fire department, or local law enforcement.

Can You Bring Puff Bars on a Plane? (Quantity & Regulations)

Electronic cigarettes like puff bars have become increasingly popular in…

Can You Live In A Hotel? (Hotel Policies For Long-Term Guests!)

Staying in a hotel has many advantages, as these establishments…

How Late Can You Check Into A Hotel? (With A Reservation)

Vacations are the best time to unwind and take a…

Year after year South Korea has grown more popular, both…

Can You Bring CBD Gummies on a Plane? (Gummies, Oils, & Flower)

Packing and traveling can be stressful, so to cut down…

Ethiopia is a diverse & colorful land. The wildlife ranges…

The Great Smoky Mountains are a sight to behold, and…

Cozumel is a tropical island paradise located just off the…

Southwest Airlines has a great reputation because it doesn’t charge…