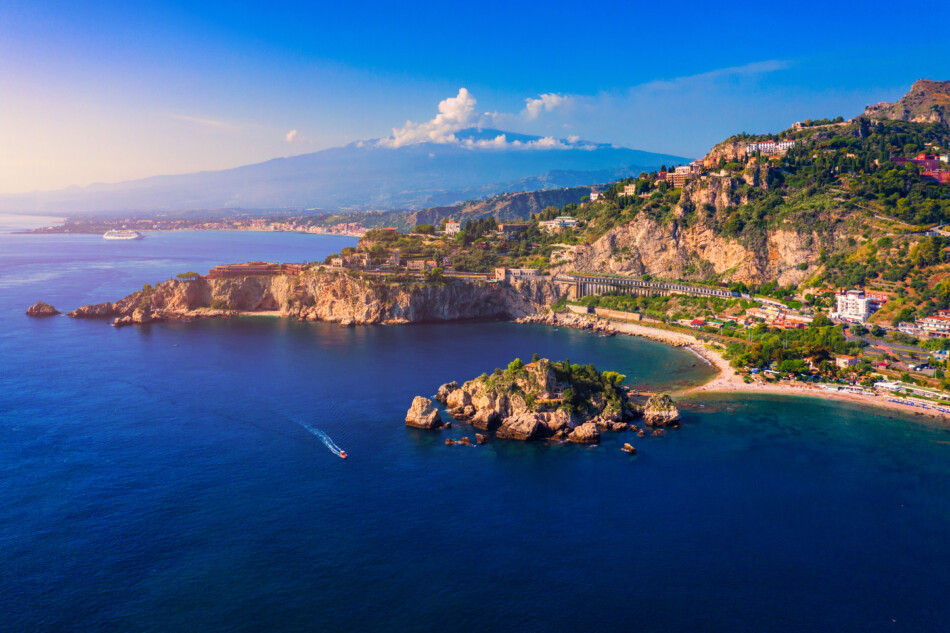 Over the years, the cities of Italy such as Rome, Milan, Florence, and Venice have been attracted by tourists. Taking a back seat, Sicily has been the forgotten, magical destination that many travelers often look over. Sicily has a beautiful coastline, many attractions, and historic towns to be explored!

The best time to visit Sicily is from May to June when temperatures average between 74 F (23 C) and 60 F (15 C). When booking, you’ll be able to find flights for as low as $800 roundtrip. You can find hotels priced as low as $40 per night, but remember to book in advance for the best deals.

When traveling to a destination such as Sicily, you’ll want to weigh the factors that help you know when to plan your vacation. Let’s dive into the best time to visit Sicily.

Worst Time to Travel to Sicily

When traveling to Sicily, you’ll want to take into consideration the current season, climate conditions, and busiest time of year. The worst time to visit Sicily is during July and August. During this period, temperatures are very hot and rates have increased.

Summer is typically the peak season in Sicily and crowded with vacationers coming from Italy and Europe. While crowds may be denser on the beaches, you’ll expect an increase in hotels, flights, ferries, and car rentals.

When is the Cheapest Time to go to Sicily?

The cheapest time to take a vacation to Sicily is from November to April. Let’s break down some rates so you can have the best prices possible when trying to plan a budget-friendly trip.

When booking the cheapest trip to Sicily, the most affordable that you’ll find is $380 roundtrip. When wanting to make your trip budget-friendly, you’ll want to book far in advance to get the best rates.

For the cheapest rates on accommodations, you can find hotels starting at $50 per night. If you’re on a budget when booking, look for a hotel that comes with extras such as an included breakfast. Costs vary per month so make sure to plan your trip three to six months in advance.

What Time of Year is the Best Weather in Sicily?

When planning your vacation to Sicily, you’ll want to go when the weather is permitting and deals are at their lowest. Below, we discuss the weather by month so that you can choose the best time to visit for you and your family.

Temperatures average between 54 F (12 C) and 68 F (20 C) during January in Sicily. This is one of the wettest and coldest months to visit Sicily. Winters in Sicily and normally mild and rainy.

If you’re planning to travel during this time, you can pack a coat, pants, long sleeves, sneakers, and rainy day items. During this month, you may be able to catch the Sagra della Sfincia di Priescia festival. This is a festival that is known for dedicating a certain sweet dish familiar to the area.

During the festival, you’ll also come across stalls that offer sfincia that is topped with cinnamon sugar. The best part is that it’s free!

Temperatures average between 42 F (5 C) and 54 F (12 C) during February in Sicily. Along the coasts, the weather is warmer than on the islands, and also sees a little rain. If you’re traveling at higher altitudes, you’ll experience colder temperatures and snowfall.

At this event, you’ll get to taste sweet Sicilian dishes made with almonds. You’ll also get to experience parades, music, fireworks, and craft vendors.

Temperatures average between 43 F (6 C) and 59 F (15 C) during March in Sicily. Towns in the northern areas are mild and rainy which still allows you to see the cherry blossoms bloom. March is a cloudy month that will see rain, wind, and thunderstorms.

At this event, you’ll see parades and parties throughout the cities that will last for weeks.

Temperatures average between 46 F (8 C) and 60 F (16 C) during April in Sicily. In April, Sicily is pleasantly warm with a cloudy overcast. There may be a slight chance of rain, thunderstorms, and fog.

If you’re planning to travel during this month, you’ll want to pack rain gear, a jacket, pants, t-shirts, and a pair of sneakers or rain boots. During this month, the temperatures are perfect to go cycling. Biking is one of the most popular activities in Sicily.

You’ll find several cycling trails in Sicily that cross beautiful terrains and landscapes. Taormina is one of the best places to cycle where you’ll see the countryside, sleepy villages, and rolling hills.

Temperatures average between  60 F (15 C) and 74 F (23 C) during June in Sicily. June is a pleasantly comfortable month with sea temperatures around 72 degrees. June experiences a decrease in cloud cover with the clearest day being June 30th.

This event kicks off the summer film season during the second week of June with one of their world premieres followed by other releases.

Temperatures average between 66 F (19 C) and 82 F (28 C) during July in Sicily. July is another warm summer month in Sicily with sea temperatures at 78 F (25 C.) This month sees only two days of rainfall out of the month, which makes it a prime time to do water activities.

The beach is lined with palm trees, pale sand, and emerald waters. Visitors highly recommend this beach due to its clear waters and the ability to rent beach chairs and umbrellas.

Temperatures average between 66 F (19 C) and 82 F (28 C) during August in Sicily. August is the last month of summer and a moderately hot month in Sicily. This month sees only 3 days of rainfall, which makes it a prime month for swimming and other outdoor activities.

Temperatures average between 62 F (17 C) and 77 F (25 C) during September in Sicily. September is the first month of autumn and a moderately hot month in Sicily. Sicily has the perfect water temperature of 77 F (25 C.)

When visiting you’ll come across a Greek acropolis, beautiful beaches, and volcanic vents with lava running towards the sea. To reach the islands you can take a ferry or helicopter from the cities in Sicily.

October: Visit the Valley of Temples

Temperatures average between 55 F (13 C) and 68 F (20 C) during October in Sicily. October is another autumn month with temperatures decreasing from moderately hot to pleasantly cool. October is the month with the most rainfall with 4 inches of precipitation.

Visitors who have traveled here recommend exploring for at least a full or half-day. Others have recommended that you travel during the cooler months as the temple is on a ride and the summer months can get pretty hot.

Temperatures average between 50 F (10 C) and 60 F (16 C) during November in Sicily. November is the last month of autumn and an enjoyable month temperature-wise. Rain falls for 11 days in November with around 3 inches of precipitation.

Visitors say the site is stunning and recommend to stay for exploring for a half-day. It’s also recommended to stay there for the sunset.

December: Visit the Town of Cefalu

Temperatures average between 44 F (7 C) and 55 F (13 C) during December in Sicily. December is the first month of winter in Sicily and a moderate month. Rain falls for around 11 days out of the month with 4 inches of precipitation.

If you’re traveling during this month, you’ll want to pack a coat, long sleeves, sweaters, and a pair of sneakers or boots. During this month, the holidays are perfect for visiting the town of Cefalu. Cefalu is the perfect holiday destination and is great for exploring during the off-season.

You can enjoy a walk along the coast and wander through the town. If you want to catch an amazing view, you can even hike up to the summit of La Rocca & Saline di Saraceni.

What is the Best Time to Visit Sicily With Family?

The best time to visit Sicily with family is in the early spring, such as April. In the spring, you’ll find huge amounts of photo-worthy cherry blossoms. You’ll also be able to avoid the early-summer rush which begins in May.

We know waiting in long lines for anything can be a headache, especially when you have young children. This is why we recommend traveling when the crowds are low and the temperatures are comfortable.

If you plan on a well-rounded vacation, visiting historic sites and admiring the scenic views, you’ll love traveling this time of year.

When is the Best Time to Avoid Crowds in Sicily?

If you’re traveling during this time, you’ll want to pack warm layers, as temperatures inside will also be on the cooler side. When making your itinerary, you can expect shorter hours, more breaks at sights, and fewer activities. The big cities will be open, but the remote areas often shut down during this time.

When is the Rainy Season in Sicily?

The rainy season lasts for nine and a half months, from August 20th to June 6th. The month with the most rain is December, raining an average of 9.8 days. There are alternating jet streams in the Mediterranean that lead to precipitation in Sicily.

During the sun, the subtropic highs keep precipitation low by suppressing cloud development and rainfall. The average rainfall in Sicily is a little over twenty-three inches each year in October, November, and December. November and December are both the wettest months of the year.

What are the Best Things to Do in Sicily?

Visiting a new place can be overwhelming yet exciting all in one. Below are a few of the best experiences that you can have in Sicily when visiting.

A trip to Sicily wouldn’t be complete without tasting some of the best Sicilian sweet treats. Since there are many nuts and fruits found on the island, Sicilians have become famous for treats such as cassata siciliana. This dish is a sponge cake with rum, ricotta cheese, and candied fruits.

Visit the Museum of Maioliche

Located in Palermo, this 17th-century Palace was once home to the Fernandez, Torre, and Benso families. The rooms in the museum show restored majolica and murals. If you want to visit this museum, you’ll need to contact the museum beforehand.

Along the Mediterranean Sea and warm climate from May to October are the beaches of Sicily. You can check out the beach of Cefalu or Taormina. The beach of Taormina has a cable car that will take you to Mazzaro Bay, which is a WWF Nature Reserve.

ContentsHow much does it cost to Travel Italy!?Popular Destinations:1. Rome:2.…

The Amalfi Coast is one of Italy’s top tourist destinations.…

40 BEST Restaurants in Italy (The Most Delicious Food on Earth!)

One of the best aspects of traveling to Italy is…

Italians refer to Rome as a lasagne. Much like the…

Every year, thousands of visitors come to Thailand’s capital city…

Mykonos is a Greek island situated in the Aegean Sea…

Acadia National Park is a breathtaking landscape located in Maine.…

Venice is one of the top picture-perfect traveling destinations in…