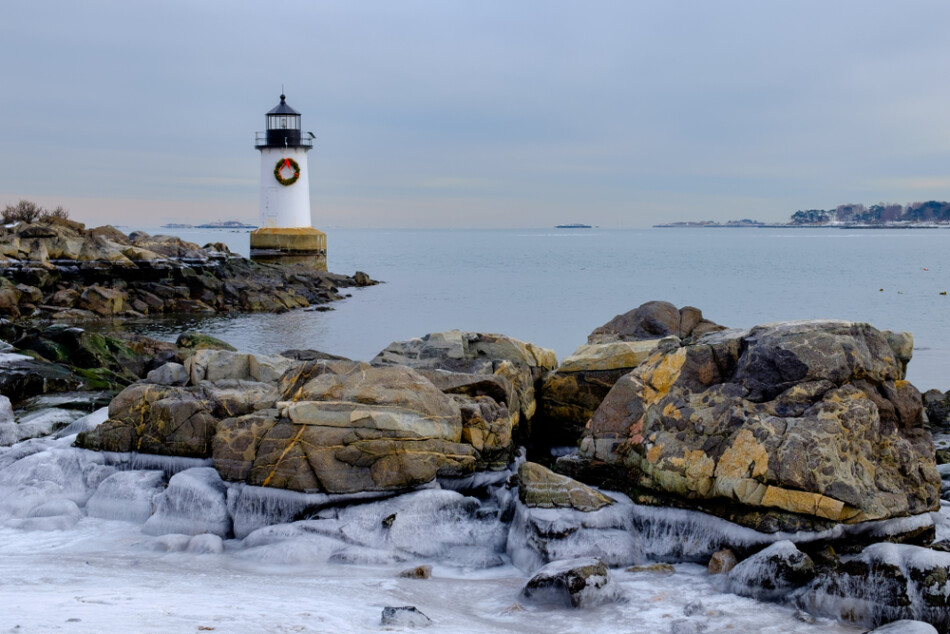 Salem, Massachusetts, is an enchanting land with a rich history and unique culture. Known for its infamous witch trials that occurred centuries ago, Salem is a popular destination for those who love spooky things. If you want to book a trip to this New England city, you may wonder when the best time to visit Salem is.

Autumn is the best time to visit Salem, MA. From September to November, the weather is pleasant, with the average daily temperature ranging from 62° to 70°F (16°- 21°C). It’s the most beautiful time with Salem’s fall foliage and Halloween decorations that fill the city. You can find hotel accommodations and vacation rentals for as low as $100 per night.

Do you want to start planning your trip to Salem, Massachusetts? Today, we will discuss the best times to visit this city. We’ll give you a month-by-month breakdown of what Salem offers throughout the year.

December and January are Salem’s coldest months, with temperatures regularly dropping below freezing. The city can receive up to 10 inches of snow per month. If you’re a warm-weather traveler, you will want to avoid visiting Salem in winter.

October is the busiest month in Salem, with its fall festivals and Halloween-themed attractions. Salem’s population nearly doubles as crowds flock to enjoy the spirited atmosphere. Hotel rates rise by 35% this month, and the high demand causes airlines to raise their rates too.

What is the Cheapest Time of Year to Go to Salem, MA?

The absolute cheapest month to visit Salem is in November. After the October crowds have gone home, the city is relatively quiet. You can book a round-trip flight for as low as $146, and a one-way ticket costs only $43.

January through March have the least crowds. The cost of staying in Salem is higher than the average U.S. city, so traveling during the low season may be best if you’re on a budget. Vacation rentals can cost between $150 and $500 per night. Hotel rates are cheaper at $78 per night.

The most important thing to consider when traveling on a budget is timing. Travelers who book their accommodations and flights in advance often find discounted prices. We recommend booking your trip at least 45 days ahead of time.

What Time of Year has the Best Weather in Salem, MA?

Salem has the best weather from April to June and September to November. The city has warm summers and cold, snowy winters. The spring and autumn seasons are enjoyable, with average temperatures of 74°F (23°C).

February, August, and September have the lowest chance of rainfall. Salem has many outdoor activities and walking tours. These months are the best to travel during to maximize the amount of time you have outdoors.

Related Read: 60 BEST Things To Do in Salem, MA

One of Salem’s neatest features is the Salem Heritage Trail. The “Painted Red Line” travels through the city’s historic landmarks. Follow the trail to be guided through 400 years of Salem’s history. The trail’s themes include the city’s earliest settlements, colonial sites and architecture, and maritime harbors.

Visit the House of Seven Gables Museum to walk through the mansion that inspired Nathaniel Hawthorne’s novel. The museum is a part of The National Register of Historic Places and features four centuries of preserved artifacts. Advance admission is only $5, and drop-in admission is $7.

February doesn’t have as much snowfall as January, but it still sees an average of 9.3”. Daily high temperatures are still chilly at 41°F (5 °C).

Salem celebrates couples and Valentine’s Day every February at the Salem’s So Sweet Chocolate and Ice Sculpture Festival. The festival takes place downtown and features delicious chocolates, gleaming ice sculptures, and Valentine’s Day shopping. It’s the perfect time to take a romantic getaway with your loved one.

After the festival, tour the “Witch House,” which belonged to Judge Jonathan Corwin. Corwin was responsible for the wrongful execution of many people accused of witchcraft. This house is the only building still standing that relates directly to the Salem Witch Trials.

Take a tour of The Salem Witch Museum to learn about the witch trials of 1692. The museum consists of two presentations and 13 life-size stage sets that depict the Salem witch-hunt. Visitors must buy tickets online before visiting the museum.

Salem is a coastal city with a nautical history that visitors can learn about. The New England Pirate Museum is a fun place for the whole family. Walk through a dockside village and aboard a pirate ship while learning about the pirates who took over Salem centuries ago.

Spring is around the corner in Salem once April hits. With nearly 12 hours of sunlight, the days are warm and comfortable.

The warm temperatures make April perfect for kayaking. Salem Kayak allows you to see Salem’s scenery from the water. Stops include Coney Island and Salem Harbor. And if you’ve never been kayaking, the company will give you lessons before the tour begins.

Pickering Wharf is a fun boardwalk featuring many restaurants and other fun seaside activities. It’s perfect for evening strolls and grabbing dinner or dessert. Nearby is the Salem Maritime National Historic Site, where you can see the recreation of the tall-ship Friendship of Salem.

May: Best Time for the Arts

The weather warms up even more in May with an average high of 66.2°F (19°C). Travelers will get 2 extra hours of sunshine this month, maximizing time for outdoor activities.

See five of the filming locations of your favorite Halloween movie on the Hocus Pocus Walking Tour. Explore Pioneer Village and learn how Salem became known as “Witch City.” Each attendee will get a free Hocus Pocus souvenir.

The Peabody Essex Museum has something for every traveler in your group. From paintings and sculptures to buildings and gardens, this world-renowned art museum is a must-see. The museum has been collecting and preserving local and international art for over 200 years.

June is the first month of summer and moderately hot, but gentle breezes make the days pleasant. It’s one of the most excellent months in Salem with little rain.

You can soak up the sun at Salem Willows Beach. With over 35 acres of oceanfront, this waterfront park is the perfect spot for a picnic. You can relax on the shores, swim, and even fish. There are also tennis and basketball courts and trails to walk on.

Nearby is the Salem Willows Arcade. You can grab a bite to eat after a day on the beach and cool off indoors while playing classic arcade games. Make sure to check out the modern Bumper Cars with inflated inner tubes so you can spin 360°.

If you have a dark sense of humor, the Witch Dungeon Museum is a charming place to spend the day. You will witness a dramatized witch trial and be brought to the basement to see the makeshift dungeons. Admission is $13 for adults and $10 for children ages 4 to 13.

Starting at Liberty Street, the Myths and Misconceptions Walking Tour aims to educate visitors on the real history of the Salem Witch Trials. The tour travels to the Witch Trials memorial, the original 17th-century jail, and the Old Burying Point Cemetery.

August is the driest month in Salem, and the days are hot with no rain. The average temperature rarely falls under 81°F (27.2°C).

The Antique and Classic Boat Festival is held every August in Salem. Located at the Safe Harbor Hawthorne Cove Marina, the festival features boats and ships of all sorts. You can explore the different boats and even ride on some. Enjoy music performances while learning about Salem’s maritime heritage.

The Salem Jazz and Soul Festival also takes place in August. The festival is run by a nonprofit organization that hosts free concerts to support music-education programs in Salem. Salem has a long jazz history, and the festival recreates the city’s vibrant jazz scene that began a century ago.

Saugus Iron Works National Historic Site is America’s inaugural ironworks site. The factory has been preserved to teach people about the impact of iron on society. Admission is free.

October: Halloween Fun in the City

The fall season is moderately chilly, with a daily average high of 62°F (16°C). October is the most atmospheric time to visit Salem.

October is by far the most festive and spookiest time to visit Salem. The entire city goes all out on decorating and fully embraces the spirit of Halloween. Salem Haunted Happenings is the world’s largest Halloween celebration, and more than half a million visitors travel to Salem in October.

There are parties, vendor fairs, walking tours, and special events all month long. You can find people walking around in costumes on the weekend. It’s the perfect time to take the Salem Trolley Tour. With 14 stops, you will visit murder scenes, haunted hotels, underground passageways, and more.

Attend the biggest Halloween party at The Official Salem Witches’ Halloween Ball. Locals and visitors gather for a night of live music, dancing, and prizes.

The weather in November varies but doesn’t include snow just yet. The evenings and nights can get cold, with lows dropping to 48.1°F (8.9°C).

The Witch Trials aren’t the only piece of history in Salem. Fort Sewall is an integral part of American military history. The fort was a significant asset during the Revolutionary War and the War of 1812.

The Breakheart Reservation has more than 600 acres to explore. There are many trails for cycling and hiking. You can also fish in the Saugus River and appreciate Salem’s natural beauty.

December is the first month of winter in Salem. The city typically sees at least 4” of snow this month.

Salem Holiday Happenings begin the Friday after Thanksgiving and last until January. There are holiday shopping events, holiday lightings, and specialty tastings. You can even see Santa arrive on top of the Hawthorne Hotel.

Christmas in Salem is a tour that lets guests inside of Salem’s most historic homes that have been professionally decorated for the holidays. There are wine tastings and Christmas traditions that date back four centuries.

Best Time to Go to Salem, MA to Avoid Crowds

November through January is the best time to travel to Salem to avoid crowds. Visiting in early November will give you the fall season experience without the crowds. November still has the lovely New England weather that October does.

As temperatures drop in December and January, so do the crowds. These two months are best if you don’t mind traveling in the cold and possibly snow. The city’s 17th-century homes and buildings look beautiful covered in snow, and you won’t have to worry about wait times anywhere.

Salem is a north-coast city in Massachusetts known for its…

New England is made up of 6 states in the…

20 Best Hiking Trails in Massachusetts (Accessible to All!)

Massachusetts is not only home to one of the most…

Massachusetts is home to breathtaking scenery and charming New England…

Cairo is the beautiful capital of Egypt and due to…

Thousands of tourists travel to this famous Mexican beach every…

Big Sur is a 90-mile stretch of coastline between San…

Have you been wanting to plan a trip to England,…

Panama is located in Central America and is a popular…