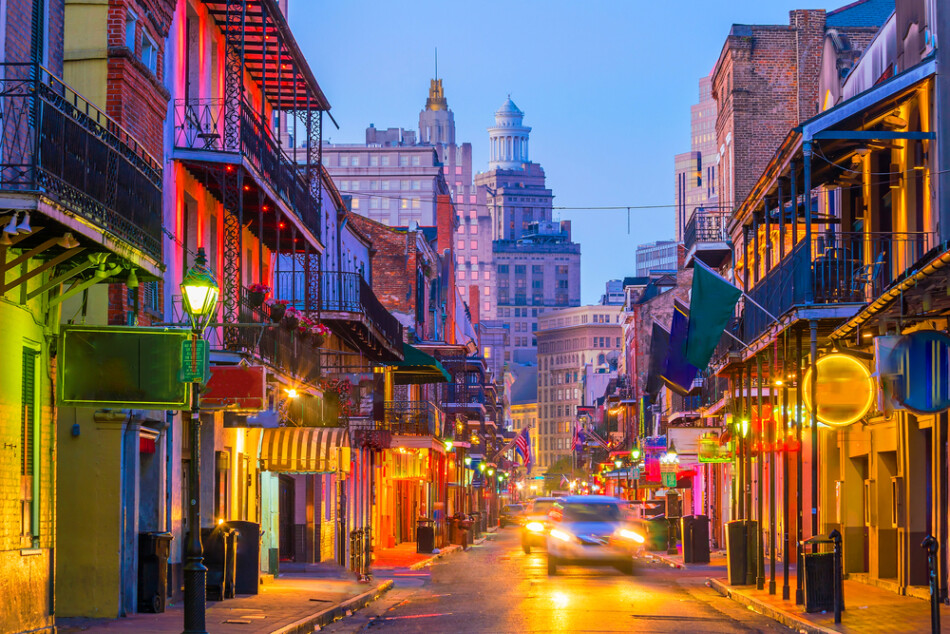 New Orleans is among the most popular vacation destinations in the United States. You won’t find any other U.S. city with such unique cuisine, culture, and nightlife. So, what is the best time to visit New Orleans?

Hurricane season is a dangerous time in New Orleans between June 1st and November 30th. New Orleans is a great vacation destination because there are events and festivals each month of the year. Follow along as we explore the best time to visit New Orleans.

When Should You Not Go To New Orleans?

July and August are the best times to avoid New Orleans because of how hot and humid it gets. There are still plenty of festivities during the summer, but the heat can be exhausting. This is also the peak of hurricane season in New Orleans which adds an extra element of danger that can taint the trip.

You also may want to avoid New Orleans during January if you want to sidestep all of the craziness surrounding Mardi Gras. Over 1 million tourists flock to Mardi Gras during February in New Orleans, and that means hotel rates and flights are expensive. The excessive crowding also makes it difficult to enjoy the city if you don’t want to partake in the parade itself.

July and August may be a great time for locals in New Orleans, but the opposite is true for tourists. You can experience lower rates which may be tempting, but the heat is a major deterrent. New Orleans involves a lot of walking, and it can be too much to handle during the heat of late summer.

What Time of the Year is the Best Weather in New Orleans?

King Cake is a timeless tradition in New Orleans, and January is the best time to get it. January marks a special transition period in New Orleans as the city kicks off the carnival season. New Orleanians begin making and purchasing king cakes and preparing for festivities to come.

Martin Luther King Day is another big staple of culture in New Orleans and the community comes together. The Twelfth Night, also known as the epiphany, is on January 5th and Mardi Gras begins the next day. Temperatures average 45-64 degrees during January in New Orleans.

February may be the most fun month to be in New Orleans, and the festivities don’t stop. Mardi Gras runs until Fat Tuesday, but the 2 weeks leading up to that are an endless party. Whether it be the Krewe de Joan D’Arc or Krewe of Trucks, the streets are never empty in New Orleans during February.

Visitors will become familiar with the various Krewes in New Orleans. Krewes are organizations that exist solely to celebrate the rich culture of New Orleans during the carnival season. The average temperature in February ranges between 47 and 66 degrees.

The weather warms up as Mardi Gras ends and March ushers in a new wave of festivities in New Orleans. Celebrate French history in New Orleans with the Se Faire Une toile au French Film Festival. The Saint Patrick’s Day Parade is another big event in New Orleans during March for tourists and residents alike. Temperatures heat up in March and get up to 75 degrees.

The warm weather and humidity kick into high gear during April in New Orleans. Events such as Wednesday at the Square and the Freret Street Festival keep the celebrations going all month. The Spring Garden Show is a mellow event at the famous City Park’s Botanical Garden that is perfect for families.

French Quarter Festival is one of the most tourist-friendly events in New Orleans. April 29th kicks off the New Orleans Jazz and Heritage Festival. It gets hot during April in New Orleans and temperatures average 61-79 degrees.

May: Best Time to Learn

The New Orleans Jazz and Heritage Festival runs through the first week of May. It is a great way to experience the history, music, and cuisine in New Orleans as a tourist. New Orleans residents also celebrate Cinco de Mayo on May 5th with all of the food and music that go along with it.

National Shrimp Day is May 10th and it celebrates one of the city’s most beloved foods. The Crawfish Festival is another event to celebrate shellfish in New Orleans during May. You can expect temperatures between 68 and 85 degrees in May in New Orleans.

June is a popular time for tourism in New Orleans and the streets are packed.  Restaurant Week officially celebrates the city’s world-renowned cuisine. Fun events like the French Market Creole Tomato Festival are just as fun for tourists as they are for residents.

The weather gets quite hot in New Orleans during June as the cloudy skies and rain of the spring fade away. New Orleans celebrates history and diversity with New Orleans Pride and Juneteenth. Temperatures get up to 90 degrees in June with high humidity.

The festivities don’t stop in July when you visit New Orleans. Events such as Life fest, NOLA River Fest, and the Fourth of July celebrations are a unique blast. Music-lovers would enjoy the annual ESSENCE Fest in New Orleans which celebrates African American culture and history.

New Orleans even has its own Running of the Bulls each July which Spain is traditionally known for. The key difference is that there are no bulls, and the festival instead features roller derby girls. July weather in New Orleans brings temperatures between 76 and 92 degrees.

August: Best Time to Dress Up

New Orleans is home to many significant museums, and the city celebrates them for the entire month of August. The Red Dress Run is one of the most unique events in the city and encourages attendees to wear a dress and run to the French Quarter. White Linen Night takes place in the Arts and Warehouse districts with plenty of food, music, and art to satiate your appetite.

HexFest is a celebration of the long tradition of witchcraft and voodoo in New Orleans every August. The Salsa Bachata Festival is another opportunity to experience the vibrant culture, nightlife, and cuisine in New Orleans. August is among the hottest months in New Orleans with highs in the mid-90s.

Locals will tell you that the best thing about September in New Orleans is that the Saints begin their season. Nothing compares to being at a bar or restaurant in New Orleans as the locals cheer on their home team. Southern Decadence is an event that takes place in the French Quarter and has gone on for over 40 years.

Spanish Heritage Month runs from September 15th to October 15th in New Orleans. It is the perfect opportunity to explore the Hispanic history and cuisine in the city. Luckily, the weather cools down a bit in September, but you can still expect temperatures in the upper 80s.

Related Read: 50 Most Beautiful Places in the US

October: Best Time to Get Scared

Oktoberfest is a big deal in New Orleans and the festivities run throughout the whole month. The football season is in full swing during October, and you can feel it at every bar and restaurant in October. New Orleans is one of the best places to be on Halloween, and festivities begin on October 27th.

New Orleans is home to several haunted houses, such as New Orleans Nightmare and The Mortuary which operate in October. NOLAxNOLA is a unique music festival every October that runs from October 7th-17th. Temperatures drop in October and 62-80 degrees is normal throughout the month.

New Orleans celebrates Christmas throughout the entire month. The Christmas Even Bonfires are a breathtaking display of how New Orleans values the holiday. Temperatures fluctuate between the 40s and 60s during December giving visitors and residents a break from the heat.

The best time to visit New Orleans with family is anytime between February and May. Endless festivities such as Mardi Gras and the French Quarter Festival take place during this time. The heat and humidity that New Orleans is known for aren’t overbearing from February-May.

Adults and children alike can have fun in New Orleans during these festivities because there is so much to do and see. Some parents are apprehensive because of the partying that goes on during Mardi Gras, but it is all avoidable. Neighborhoods like the French Quarter are safe for families during this period as there is a heavy police presence.

However, a January New Orleans vacation is a great alternative if you want to avoid the craziness with your family. That way, your family can experience the unique culture and cuisine in New Orleans without navigating crowded parades.

October-November is the best time to visit New Orleans to avoid crowds. Events like Oktoberfest don’t draw crowds from across the country in the way that Mardi Gras does. You can still have plenty of fun in New Orleans between October and November without having to brave large crowds.

This allows you to experience New Orleans in the way that locals typically do. You won’t have to worry about the extreme heat and humidity that New Orleans is known for during October and November.

March and early April are also great times to visit New Orleans to avoid crowds. However, late spring can get hectic in New Orleans because of the spring break crowd. Tourists can navigate the city without massive crowds in early spring and experience the weather and culture with the right timing.

Be Careful of Hurricane Season in New Orleans

Hurricane season runs from June 1st-November 30th in New Orleans and can be a dangerous time. Historical hurricanes like Katrina caused unforgettable damage to the city and you can still feel its presence. Hurricane Ida is the most recent example and it caused devastation from August 26th-September 4th 2021.

Hurricanes are among the most devastating tropical storms, and New Orleans sadly is at high risk for them. New Orleans sits below sea level which puts the Crescent City at a particular disadvantage. Hurricane winds start at 74 miles per hour and can cause extreme damage to buildings.

The winds reached over 170 miles per hour during hurricane Katrina in New Orleans. Flooding and excessive winds in New Orleans have caused over $160 billion in damages.

Unless you spent years in the kitchen with your grandma,…

The city of New Orleans boasts a rich culture, one…

45 BEST Things To Do With Kids New Orleans, LA (You'll Have Fun Too!)

New Orleans is a lively city in Louisiana located on…

Best Time to Visit Canada (Get the True Canadian Experience!)

Have you been wanting to plan a trip to Canada,…

Aspen is a popular winter destination for skiers and snowboarders…

Although Austria may not be among many people’s top European…

Best Time To Visit Scandinavia (Outdoor Fun For All Seasons)

Scandinavia is a region in Europe that consists of Norway,…