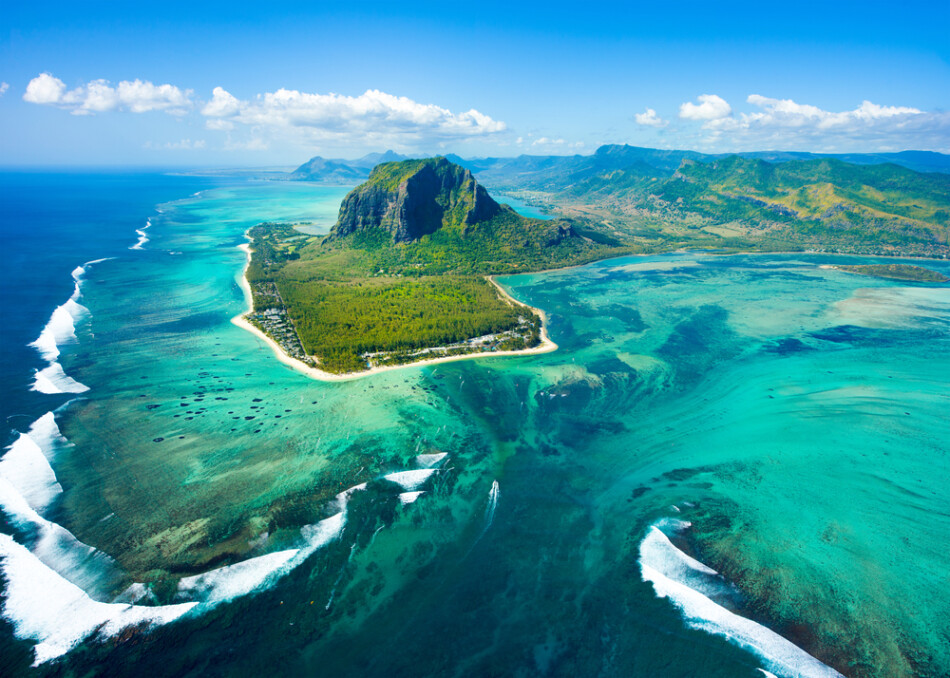 Mauritius is such a diverse travel destination with its mix of African, Chinese, and French influences. The island’s coastline is lined with palm trees and the beach waters are clear as glass. Whether you want to hike the jungle trails and swim in the waterfalls or go snorkeling with dolphins and sea turtles, Mauritius offers its visitors exotic opportunities.

The best time to visit Mauritius is from August to October when temperatures average around 68 degrees Fahrenheit. September is best for those who are on a budget as most accommodations are as low as $25 to $30 per night. Or you can visit in November for the Diwali Festival of Lights and visit the Aquarium.

From visiting the island’s colorful capital to indulging in the traditional street foods, Mauritius’s cultural scene offers just as much as the natural landscapes.

Unlike many islands, Mauritius is more than just breathtaking beaches. From dolphin watching to volcano exploration, the island’s attractions are incredibly vast.

There’s no bad time to visit the island because every month of the year offers something different. January – March would be best to avoid because they are the hottest and rainiest months. Temperatures in these 2 months average in the high 80s.

Despite the weather, January is peak tourist season in Mauritius. Hotels book up early and fast. If you plan to visit in January, you will have to book well in advance. December – March stay relatively crowded, so if you’re looking for a quiet getaway, you’ll want to visit outside of these summer months

What is the Cheapest Time of the Year to go to Mauritius?

You’ll find the cheapest hotel rates if you travel to Mauritius from May to October. September has some of the best rates at only $25 to $30 per night. Once November hits, hotel rates rise up twice as much compared to October.

The cheapest time to fly to Mauritius is during April and May and in the month of November. You can book a one-way flight for under $500, and a round-trip for $1100.

What Time of the Year has the Best Weather in Mauritius?

Mauritius has the best weather from May – October when it’s dry season and there’s little to no rain. October – December is the early summer season and has the most ideal beach conditions during this time.

November – February is hot and humid and temperatures average in the high 80s. Cyclone season includes the months of January and February. But Mauritius’s location in the Indian Ocean helps it fare well against cyclones, and resorts are built to withstand them.

January: Take an Excursion to the Luxurious Island of lle aux Cerfs

Lle aux Cerfs lies in the largest lagoon of Mauritius and has 87 hectares of flourishing vegetation and miles of beaches. There are dozens of water activities such as snorkeling, parasailing, tube riding, and more. One of the most notable attractions is TerrOcean, two large obstacle courses with Tarzan swings and rope bridges.

You can also celebrate the Chinese New Year at the Spring Festival with local Mauritians. The festival is full of fireworks, food, and there are colorful parades with dramatic costumes. The main hub of festivities takes place in Port Louis’s Chinatown.

February: View the Luminous Mauritius Skies at the Lantern Festival

The Chinese New Year ends with the illuminating tradition of the Lantern Festival. It is without a doubt one of Mauritius’s most popular festivals. Dancing dragons fill the streets as the Chinese community comes together with tourists to parade and celebrate.

Another holiday celebrated in February is Thaipoosam Cavadee. The holiday centers on pilgrimage and the symbolic carrying of wooden arches decorated lavishly with flowers. Celebrated by the Indian people of Tamil, elaborate ceremonies include sword climbing and firewalking.

March: Immerse Yourself in a Sea of Rainbow Powders at Holi Festival

The Hindu festival of Holi has become a global sensation and is often called the “Festival of Color.” The festival aims to unite people of all status, gender, color, and religion together. During the festival, people dance, sing folk songs, and throw colored powders everywhere. It’s a joyful thrill to experience.

You can also head to Port Louis to celebrate Independence Day on March 12th. This is the day the island won its independence from the British in 1968. The lively parades and annual ceremonies will give you insight into local Mauritian life and the island’s history.

April is the perfect month to experience all of the magnificent food Mauritius has to offer. Port Louis hosts the very popular China Town Food and Cultural Festival. The festival is in its 17th year and features a grand feast, cultural activities, folk performances, and acrobatic displays.

You can also visit Pamplemousses Gardens for the ultimate interactive cooking experience. You will be guided through the garden to observe over 500 different plant species. You will gather ingredients as you go to literally go from farm to table. You will then meet with a local family to prepare a Creole-style home cooked meal.

May: Experience the Thrill of Mauritius at La Vallee Des Couleurs Nature Park

La Valle Des Couleurs Nature Park has a number of adrenaline-rushing activities for you to do, like quad biking and ziplining. The Nepalese Bridge is also a popular attraction, suspended 100 meters above the forest canopy. If you’re brave enough, you can walk across the bridge, which spans 360 meters over the Indian Ocean.

Visitors also can enjoy the exhilaration of the Mountain Luge Karts. Gravity makes this 700M track down the mountains a fast-paced adventure. It’s an addictive activity suited for all skill and age levels.

June: Learn how to Kite Surf in Cap Malhereux

With temperatures still in the mid-70s, June is a popular month for one of Mauritius’s most popular watersports, kitesurfing. The sport involves being pulled by a specifically designed kite while you ride along the water on a modified surfboard. The speed is exhilarating and you feel like you’re gliding in the air. There’s several kite centers and schools in Cap Malhereux to help you get your gear.

After being above the water, you can have one of the best underwater experiences by doing the underwater sea walk at Trou d’eau Douce. You’ll be provided with a special helmet that delivers a constant supply of air so you can walk the ocean floor with a trained guide. Seeing Mauritius’s abundant sea life up close is an experience like no other.

July: Discover the History of the Cultural Melting Pot that is Mauritius

Walk through Aapravasi Ghat to experience two and a half centuries of history. This historical center will help you discover Mauritius’s colorful past of the half a million Indian immigrants that made the island their home. Visit the Postal Museum in Port Louis, and pass by the sugar plantation to sample local delicacies.

History isn’t the only thing Mauritians fight to preserve. You can experience conservation in action at the Aux Aigrettes Nature Reserve. After a short boat ride across Mahebourg Bay, you will be guided through the reserve’s trails. Not only will you see flora and fauna distinct to the island, but you will be able to view rare species like the Giant Aldabra Tortoise and the pink pigeons

August begins the humid, warm summer season. Since there’s very little rainfall this month, it is ideal for hiking and outdoor sightseeing. It’s also the best month for whale spotting.

The Grand Bassin is quite popular attraction in the Savanne district. It’s a crater shaped lake in a secluded mountain area. Used as a sacred place for pilgrimage, it’s home to several temples. The architecture and quiet atmosphere make it a peaceful spot to reflect and relax.

You can also spend time touring the beaches on horseback. Located in Riviere du Rempart, Forbach Stables takes families on a fun horse-riding adventure through the northern part of Mauritius.

Everyone who visits Mauritius visits Port Louis, the island’s picturesque capital. Known for its famous French colonial architecture, the town is full of local shops and restaurants. Immerse yourself in the island’s culture and history by visiting the Caudan Waterfront, the Central Market, and the Blue Penny Museum.

Attending the races at Champ de Mars Racecourse is another great way to spend time having fun with local Mauritians. It is the second oldest racecourse in the world. The Maiden Cup, the island’s most prominent race, takes place in September. Races occur every weekend from March – December and are free to attend.

7 Colored Earth Geopark is an incredibly vast area of sand dunes made up of colored sand. From red to blue, violet, green, and yellow sands, the dunes look like a rainbow sea. The geopark is located in Charamel, one of Mauritius’s most charming villages.

Charamel is best known for the geopark and its Rum Distillery. Not far from the sand dunes, you will find Charamel waterfall. It’s the highest waterfall in Mauritius at 100 meters high.

November: Light Your Spirit by Attending the Festival of Lights – Diwali

The joyous Hindu Festival of Lights, is celebrated all over the island in November. Thousands of lights are lit by people from different communities for Diwali. Walk the streets at night to fully embrace the magical atmosphere. There’s also a nightly display of fireworks.

Another marvel to see is the giant water lilies at Sir Seewoosaagur Ramgoolam Botanical Garden. It’s the oldest botanical garden in the southern hemisphere and has hundreds of plants used for spices and medicine.

Divers from all over the world come to see the dynamic network of coral reef at Blue Bay Marine Park. The marine park is located off the southeast coast of Mauritius and is renowned for its 1000-year-old brain coral. You will see butterflyfish, trumpetfish, surgeonfish, and more if you go sea diving here.

You can also visit the largest and oldest tea plantation on the island. The tour at Bois Cheri Tea Gardens and Factory will take you on a journey of the tea making process. You will see how tea leaves are picked, dried, flavored and packed. The tour culminates with a fabulous tea tasting.

Best Time to Go to Mauritius to Avoid Crowds

November – February is considered the peak season. Because of its tropical weather during these months, towns like Port Louis fill up with crowds visiting the beaches. The warm weather and calm waters make it the perfect time for snorkeling and diving.

Low season is from April – October. The island sees the least number of tourists during this time. Accommodations and transportation prices are cheapest at this time too. These months are the best to visit to not only avoid crowds, but to get the most out of your Mauritius getaway.

Madagascar is on a lot of travelers’ bucket lists. People…

Many seasoned African travelers consider Tanzania to be the crown…

Seychelles boasts some of the most beautiful tropical islands with…

Cape Town is known as the adventure capital of South…

When thinking about New Jersey, you might think of its…

Many parks, lakes, mountains, woods, and even deserts can be…

Europe is a favorite travel destination for people around the…