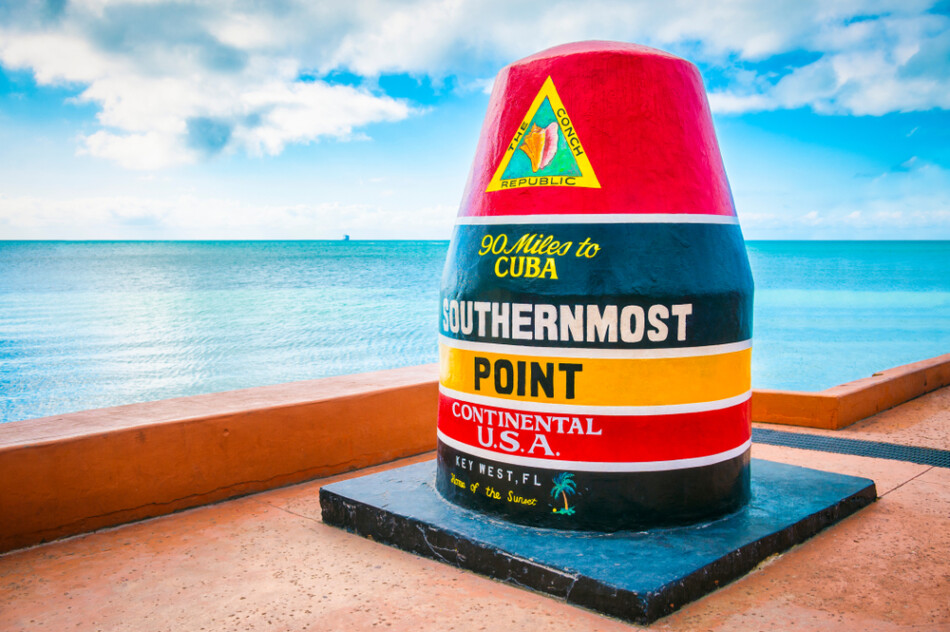 Key West is the southernmost island of the United States, located 7 miles off the coast of Florida. For decades the only way to reach the Keys was by boat, so they were secluded from the rest of the states.

This seclusion changed in 1911 with the construction of the Seven Mile Bridge to connect the lower Keys to Florida’s mainland. When the bridge opened up, so did the island’s famed tourism.

Between March and May is the best time to visit Key West. This is due to the consistent 70 to 85-degree weather (Fahrenheit). Springtime boasts fewer crowds and lower-cost accommodations. It is perfect for water activities, festivals, and other outdoor exploration opportunities. For cooler weather, visit Key West between December and February for 65 to 75-degree days.

There is no wrong time to visit Key West. Certain months have their draws and setbacks. Yet whenever you visit, you will find yourself immersed in the stunning island life of the Florida Keys. Key West is home to a host of annual events. Beyond the weather and water temperatures, plan your vacation around the island festivities.

What is the Worst Time to Visit Key West?

Unfortunately, Key West experiences the brunt of the Caribbean hurricane season. If you plan a trip far in advance, it is ill-advised to go from August to October. If you do, be sure to purchase good trip insurance.

These early autumn months can also have gorgeous weather and low crowds if you can dodge a storm. Plan cautiously to avoid a cyclone ruining the fun.

What is the Cheapest Time to Visit Key West?

Due to fear of storms hindering a trip and a high heat index, September through November is the cheapest time to visit Key West.

This dodges the summer and winter vacation seasons, so rates (and crowds) tend to be low. If you can deal with the potential of a storm, visit in the fall for a cheap time with limited tourists crowding the island.

This year, Key West hosted its 38th annual craft show. This two-day event showcases a wide range of artisan pieces from over 100 creators. Vendors set up shop in the historic district of town and welcome visitors and locals to shop.

The event has gained such international notoriety artists can expect tens of thousands of shoppers to stroll by. Art pop-ups include everything from talented potters to painters.

Something else that the Keys are known for is their famed authors. Pick up signed copies of books from modern writers as you peruse the shops. You may find your new favorite beach read.

If you didn’t get your fill of craftspeople in January, come for the Old Island Days Art Festival in February. This art festival is incredibly selective. Local judges invite over 100 artists from the United States and Canada to showcase their talent.

The event is free admission on the waterfront. Locals mingle with fine art procurers to view and purchase masterful pieces. The event often showcases a range of artists from the surrounding Keys and international creators.

Even if you don’t have the budget to buy art yourself, support local artists by enjoying their work.

The Keys are home to some prolific authors, one of which was the famed playwright Tennessee Williams. In March, the entire island gathers to celebrate his birthday.

Williams once said, “I work everywhere, but I work best here” about Key West. Visitors can come for the celebration to learn what he meant. The month of festivities includes activities like screenings of film adaptations of his plays. Also, there are tours of the Tennessee Williams Museum, and writing contests.

Related Read: 45 BEST Things To Do In Sarasota, FL

Key West hosts several annual races, but none are more popular than the Seven Mile Bridge Run. Every April, a crowd of over 1,500 runners convenes to run the longest segmental bridge in the world.

The bridge connects Key West to mainland Florida and is a gateway opening the Keys to the rest of Florida. The bridge closes for a few hours in April to allow runners to race across it. Athletes can take in the sprawling sea views and salt air on the journey.

The event is so famed that it is recognized as one of the most trafficked races in the southern United States. Join in on the action yourself or watch the spectacle. To find out about other events that happen in April, Click Here.

Singer-Songwriter is a popular genre of music that highlights raw vocalists and lyricists. Each May, Key West hosts a festival to showcase some of the biggest names in songwriting at Songwriters Festival.

The festival has been ongoing since 1997. It brings in performers both local to the southern United States as well as international names. The Key West Songwriters Festival is one of the largest of its kind in the world and lasts for five days around the beginning of May.

The event is renowned as a favorite festival of locals to the Keys while also driving in international festival-goers. For May events coming up, check out this calendar.

Stock Island is one of the premier cultural centers of the Florida Keys. The island is home to many local artisans, performers, and chefs that utilize the I Love Stock Island Festival to showcase their talents.

I Love Stock Island is a 5-day festival welcoming visitors and locals alike. The festival tends to run through Father’s Day weekend, making it the perfect celebration to take your dad to.

Immerse yourself in the local culture of Stock Island as you enjoy the festivities, food, and fun. You can reach Stock Island from Key West by following the Cow Key Channel Bridge.

Ernest Hemingway played a significant role in shaping modern prose. He called Key West home for much of his life. Today, his monumental legacy in the world of literature lives on.

Hemingway fans can make the pilgrimage to the Keys every year in mind-June to celebrate the author.

Key West is a quintessential destination for seafood lovers. One of the premier fruits of the sea caught on the island is lobster. August marks the lobster season in Key West, and every year islanders celebrate the crustacean during Lobsterfest.

One oddity about Florida’s lobster population is that the fish tends to be clawless. However, there is no shortage of meat. Some events to look forward to during Lobsterfest include an old-school lobster boil and a block party with vendors.

In August, Visitors can look forward to this festival in Key West’s low season. Crowds tend to die down, so lobster is bountiful.

Beer lovers, rejoice. The Key West Brewfest showcases hundreds of domestic and imported beers ranging from stouts to sours. The entire island gets involved with Brewfest.

Many restaurants take the opportunity to introduce beer-inspired tasting menus. You may even find a micro-brewed beer on tap. Aside from restaurant specials, Brewfest offers plenty of events.

Some of the biggest to look forward to include the Brewfest Tasting Festival and beer-inspired parties and lounges. Beyond Beer, Brewfest is a major culinary arts event. Sample Key West delicacies as you enjoy the beer.

Reef Fest coins itself as “an annual celebration of marine conservation.” The Reef Environmental Education Foundation hosts the festival. Many of the proceeds go to protecting reefs in the Keys.

The primary goal of Reef Fest is to build an appreciation and understanding of ocean conservation efforts. Especially off the coast of Southern Florida.

Beyond educational presentations, festival-goers can enjoy aquatic activities like snorkeling, scuba diving, and kayaking. It is an excellent way to view marine life while protecting the ocean they call home.

The Offshore World Championship is hosted annually in Key West and welcomes racers from across the world. Teams gather for boat races across the coast of Key West.

Even if you are not racing, the weeklong event is a spectacle that draws in thousands of visitors. The week begins with a boat parade showcasing gorgeous vessels and ends with a world-class award ceremony.

Pick and choose races to view and in your downtime, enjoy the pristine weather that is often present in November on the island.

December is one of Key West’s most heavily touristed months as visitors come in for the holiday season. For the entirety of December, find festive events to participate in.

Premier holiday events include a lighted boat parade with boats decked in festive decor and an artist’s bazaar.

The bazaar is reminiscent of a Christmas market surrounded by old-world architecture and festive goods. Various tours on the island also showcase the holiday spirit across Key West.

What is the Best Time to Visit Key West With Family?

April and May are specifically quite cheap and less rowdy than June or July. Key West has a reputation for its party scene, bars, and nightclubs. You won’t have to worry about that element as much when you bring your family to Key West between March and early June.

What is the Best Time to Avoid Crowds in Key West?

Late March is a crazy time in Key West, however, with thousands of travelers visiting for spring breaker. April and May are perfect for the 72-85 degree temperature span that spring in Key West is known for. It won’t rain for more than 5 days out of the month in both April and May, so you can fully enjoy the experience.

30 BEST Things To Do With Kids Key West, FL (But You'll Have Fun Too!)

Key West is a beautiful island in Monroe County, Florida.…

Imagine sparkling white sands against the backdrop of clear shallow…

Sarasota, Florida is an alluring beach city located south of…

Zion National Park is one of the most iconic landmarks…

Savannah is known for its historical architecture, art, views, and…