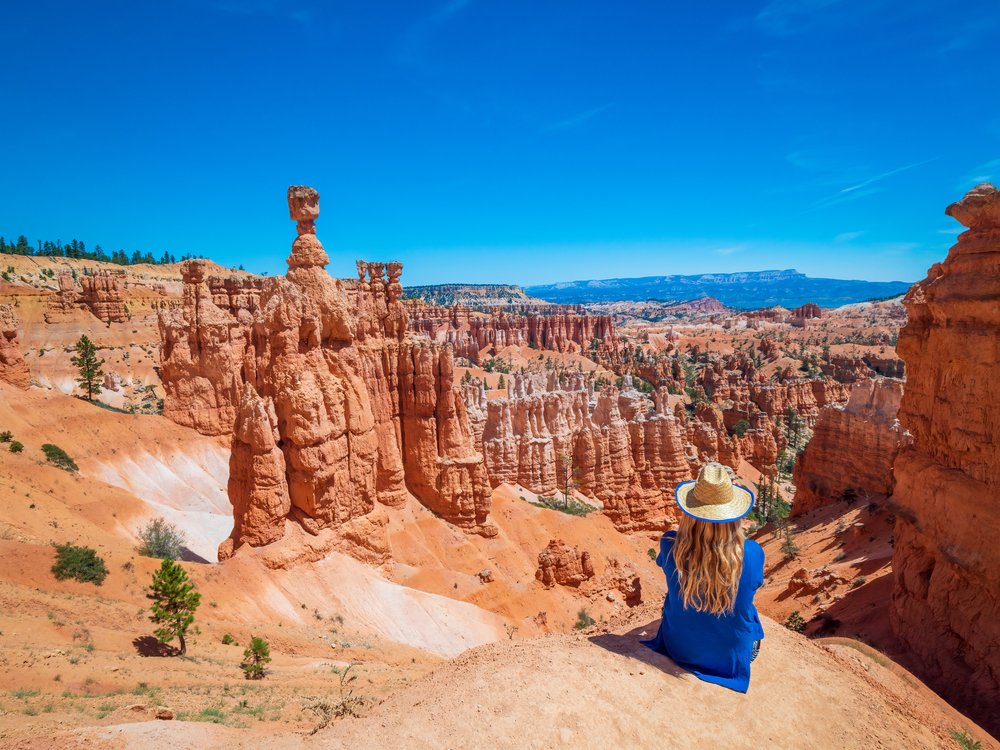 Bryce Canyon, Utah, is a beautiful National Park with plenty to offer. From snow-capped peaks in the winter to a diverse and healthy wildlife system in the summer, nature enthusiasts from around the world frequent Bryce Canyon. Determining the right time for you and your family to visit this national landmark can be challenging, with many potential options.

The best time to visit Bryce Canyon for good weather is between June and August, when the weather averages around the mid 70s. The cheapest flights to Bryce Canyon are in April, May, or October. For activities, May through August will have the most options for hiking, ranger-led activities, and wildlife sightings.

While activities may be limited in the winter months, from October to April, catching the shoulder periods for travel may be an excellent opportunity to save some money. Often, airfare and hotels are cheaper in April and October. Plus, visitors can experience fewer crowds and more opportunities to see wildlife as the animals prepare for winter or awaken from hibernation in the spring.

When Should You Not Go To Bryce Canyon?

For those who want to get the most out of their visit to Bryce Canyon, avoid visiting this National Park in the winter. Many famous hiking trails are closed between late October and early May.

The main road through Bryce Canyon will close during the winter, and the Visitor Center will have shorter operating hours. If you enjoy the cooler weather, it may be possible to go on a Ranger-led snowshoe hike at the peak of winter.

If thick crowds and busy hikes aren’t your ideas for a fun summer vacation, avoid visiting Bryce Canyon in June and July. During the summer, the trails are often crowded, and many campgrounds and lodges are filled to capacity.

The busier season has more trails to offer, but wait times may be longer for restaurants, and the chance to see wildlife could be reduced with the surging crowds.

If your main priority is traveling to Bryce Canyon on a budget, consider visiting this beautiful park in April, May, or October. Traditionally, April and May mark the end of winter, while October signals the approach of cooler weather.

Visiting Bryce Canyon during these months is a great way to snag a deal for flights and hotel accommodations. While the average price for a solo trip to Bryce Canyon is just over $1,800 for a week, it may be possible to visit Bryce Canyon in April for just over $900 for the week, saving about 50%.

Traveling to Bryce Canyon during April, May, or October will save significant money. On average, a 1-star hotel accommodation may run between $59 and $80, while flights might be as low as $400 to Bryce Canyon.

Compare this cost to prime travel season in the summer when flights are well over $800. Further, traveling during off-season times will save money on activities, restaurants, and sightseeing adventures.

What Time of the Year is the Best Weather in Bryce Canyon?

Bryce Canyon is a diverse area with plenty of outdoor adventure for visitors. Whether you enjoy hot temperatures with minimal rain or the bright red canyon peaks decorated with a fresh layer of snow, there isn’t a wrong time to visit Bryce Canyon. We have provided a list of the best activities for each month to help you plan your next trip to Bryce Canyon.

Visiting Bryce Canyon in January will allow visitors to see the landscape in an entirely new way. During this time, temperatures drop to an average of 32°F during the day and even colder at night.

Travelers should also expect snow fairly regularly. Because of the freezing temperatures and frequent snowfalls, trails are often closed during January due to safety concerns. Before adventuring out on a hike in January, always check for potential closings in the area.

Winter weather persists in Bryce Canyon through February, but that doesn’t mean the adventure is limited. February is the snowiest month in the winter, and temperatures will remain around 32°F or colder throughout the month.

During February, most of the hiking trails are covered with snow, but daily Ranger-led snowshoe hikes are available for visitors. It is still possible to see the trademark red peaks jutting out from the snow-covered canyon in February, presenting a breathtaking landscape.

In March, temperatures at Bryce Canyon are still chilly, averaging about 40°F during the day. There is still a fair amount of snow falling in March, so be prepared for several closed trail heads due to hazardous conditions.

Weather permitting, Rangers will still lead snowshoe hikes through the park. Crowds are still low during March, so you’ll get a chance to see Bryce Canyon unhindered with winter conditions and moderate temperatures.

April starts the official transition from winter to spring. Traditionally, this month is considered a shoulder month, which could mean ideal weather conditions with minimal crowds.

The average temperature in April hovers around 50°F during the day, but an occasional snow storm, especially in early April, is possible. Many of the hiking trails and lodges start to reopen in mid-April. The park shuttle also resumes operations in mid-April for guests.

While snow may still be possible in early May, this month typically is beautiful for visitors to enjoy Bryce Canyon. Temperatures consistently stay in the low 60°s. There is minimal precipitation in May, averaging just three rainy days for the entire month.

Much of the snow will melt away in May, so most of the trails and hiking will be open during this time. May also signifies the beginning of several activities and events in Bryce Canyon, including the weekly Bryce Canyon Country Rodeo and the Bryce Canyon Mule Days.

Related Read: 70 Best Things To Do in Utah

The start of Bryce Canyon’s summer officially begins in June. During this time, expect the average temperature to be in the mid-70°s, with only an average of two rainy days for the month. Many famous viewpoints are open in June, so this is the perfect opportunity to get out and explore.

Because of the nice weather, June is one of the most crowded months at Bryce Canyon. Expect the campgrounds and lodges to be at total capacity, so make reservations early. In June, there are endless activities and events presented by the National Park open and available to visitors.

July is one of the busiest months for Bryce Canyon, so be sure to arrive early to find a parking space. Have a plan in place for lodging ahead of time. All available restaurants, tourist sites, and lodges will be fully operational and open throughout July.

August temperatures start to cool down in Bryce Canyon, with the daily average in the mid-70°s. These warm temperatures also bring about crowds, so expect extremely busy trails and long lines.

This month is still prone to some strong afternoon thunderstorms, although they are less frequent in August compared to June and July. August is an excellent month for backpacking because of the seasonably warm weather and open trails throughout the park.

The official start of autumn begins in September. This month is ideal for a park visit due to the cooler temperatures and minimal precipitation. Daily average temperatures hover in the mid-60°s, making it cool enough to enjoy a long hike.

Plus, in September, many peak crowds start to thin out, so it is a great time to explore the wilderness and maybe snag a deal on lodging accommodations. Animals prepare for the winter in September, so wilderness enthusiasts may experience the best month to see wildlife around the park.

The weather in October for Bryce Canyon can be unpredictable. The weather can sometimes be cool and pleasant, with average temperatures around the high-50°s. Other times, the weather is quite chilly, and the first snowfalls of the year arrive.

Regardless, visitors to Bryce Canyon will get a different experience each year. Many of the trails in Bryce Canyon will be open depending on current weather conditions. During October, many lodges, restaurants, and attractions start to close down for winter.

Winter officially begins in November, with temperatures staying in the 40°s and often dipping below freezing temperatures. Expect the first significant snowfall in November.

This month is also when most of the main roads and lodges officially close, including the main road that runs through Bryce Canyon. The park shuttle stops running in November, but it may be possible to go on a snowshoe hike in November if the weather conditions are right.

The Visitor Center is on shortened operating hours in December. There is plenty of snow in Bryce Canyon in December, and temperatures stay around 32°F for much of the month.

Although some trails may be closed due to the winter weather, there is a fun Christmas festival and New Year’s Celebration in Bryce Canyon toward the end of the month. The annual Christmas Bird Count also occurs, with visitors tallying the migratory birds stopping through Bryce Canyon.

When Is the Best Time to Visit Bryce Canyon with Family?

Almost all of the hiking trails are open from May through October, and nature is in full bloom. While you won’t be able to see the peaks covered in snow, you will be able to see a range of flora and fauna native to the park.

Plus, visiting Bryce Canyon from May through October will guarantee that the several available services will be open and running. Shuttles will be operational through the peak busy season, and Ranger offices will be open for daily activities, tours, and information. If you plan your travel appropriately, you may even get the chance to visit an art festival, race, or rodeo with the entire family.

When Is The Best Time To Avoid Crowds in Bryce Canyon?

The best time to avoid crowds in Bryce Canyon is during the shoulder months between winter and spring and again between fall and winter. Traveling to Bryce Canyon in April, May, or October guarantees pleasant weather with minimal crowds.

When Is The Best Time for Hiking in Bryce Canyon?

For those looking to enjoy a good hike through the National Park, consider a trip to Bryce Canyon in July, August, or September. Although crowds may be heavier during this peak travel season, most hiking trails will be open and accessible before the inclement winter weather forces the trails to close.

Zion National Park is among the top destination for hikers…

Utah is a state in the Mountain West region known…

70 Best Things To Do in Utah (Fun From All Around The State!)

The town of Park City in Utah is famous for…

Istanbul is Turkey’s largest seaport city. It is partly located…

If you’re looking for a beautiful, serene getaway, look no…

Atlanta is home to many historical and tourist attractions. It…

The Everglades National Park is a stunning destination on the…

Australia is known for its spectacular wildlife, scenic beaches, and…