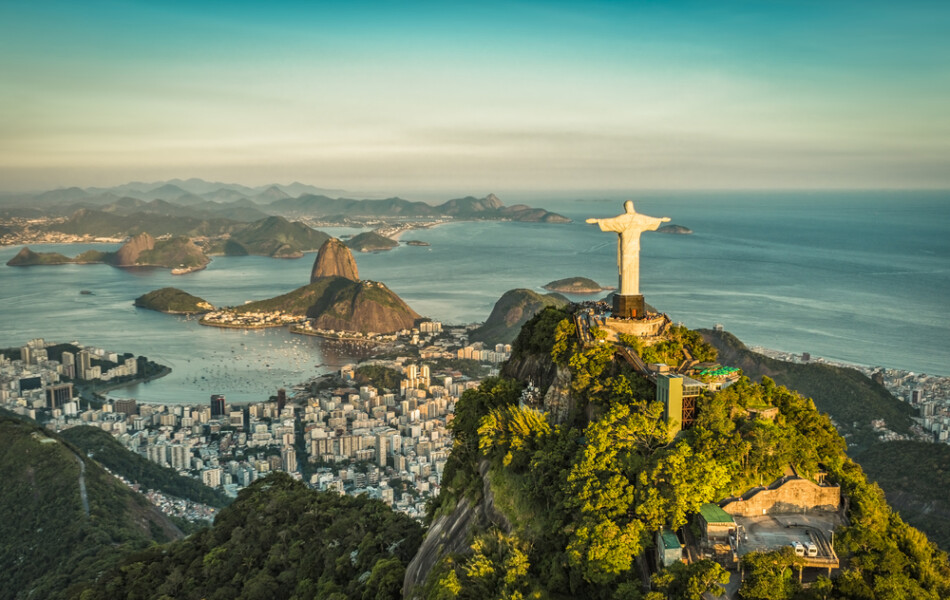 An adventure to the enchanting land of Brazil should be on everyone’s bucket list with its wide array of natural wonders and buzzing cultural cities to enjoy. From the Amazon rainforest to the breathtaking beaches of Rio de Janeiro, there is no shortage of activities in Brazil year-round.

The best time to visit Brazil is September to October as you avoid the peak season of tourism. This is when there are fewer crowds. The prices are much more affordable, with flights costing 40% less than usual. The spring temperatures stay around 25℃ to 30℃, and there is little rain during the dry season.

Brazil is such a beautiful country. However, you’ll want to plan your trip accordingly. Take the time to find the best weather and events.

When Not To Visit Brazil

If you dislike large crowds and heat it is best to avoid Brazil’s peak season from December to March. Large events such as Christmas, Carnival, and Semana Santa take place in the heat of summer and the rainy season during these months. Because of these festivities prices also go up significantly as well.

You will find similar trends from May to July, as North Americans and Europeans tend to travel to Brazil for their summer vacations. Traveling in between these periods will help you avoid high prices, crowds, rain, and temperatures!

The cheapest month to visit Brazil is in September. There are no major holidays this month and it is in the shoulder season. Meaning you miss the big summer and winter crowds and the country is quiet from its usual bustling activity.

You will also find great weather this time of year and even snow if you visit the southernmost parts of the country. Overall beaches are warm and wildlife is abundant to explore. September is a great time to enjoy a peaceful mild trip in Brazil.

When Is The Best Month To Visit Brazil

If you are looking for affordability, mild weather, and low crowds, September is the best month to visit Brazil. Summer tourists have left and the winter tourists have yet to arrive, so you will be free to explore the country without pushing for space or paying a high price.

With ideal weather and particularly vibrant wildlife, a trip this time of year will display the best Brazil has to offer. Brazils’ breathtaking landscape and vibrant culture make the country a unique memorable vacation for those who get the chance to see it.

Since Brazil exists in the Southern Hemisphere, the month of January is a perfect warm getaway for those who hate the cold. The country has varying weather across its large territory, but temperatures this month range from  31℃ and 18℃ depending on the longitude.

January is a very busy time in Brazil with new year cultural celebrations and warm beaches drawing tourists in. Flights cost about $1600 round trip from Los Angeles, making it a very expensive month to visit.

As the peak of the high season in Brazil, there is no shortage of fun to experience in February. The temperatures generally vary between highs of 28°C and lows of 18℃, but the heat is met with heavy rains 20 days out of the month.

There are many tourists around Brazil in February and the temperatures are perfect for soaking up the sun. Flights cost around $1000 this month when leaving from a major airport. Hotels will cost at least $150 a night as well, making it a very expensive time to visit.

March: Month of Carnivals and Festivals

At the beginning of Brazil’s fall season, temperatures around the country begin to cool to highs between 27°C and 20°C. It is a great time to visit the beaches and rainforests around the country. However, there is still a high chance you will run into the rain at some point.

Tourism begins to decrease slightly in March, except for the spring break crowds on the beaches. Flights cost roughly $900 in March but can spike around the time of Semana Santa. Lodging is cheaper this month as well with a 4-star hotel room costing $130 a night.

If you are looking for fewer crowds but still plenty of warm Sun, April is a wonderful time to travel to Brazil. Temperatures are cooling to averages between 18°C and 26°C. With the high season. Carnival and Semana Santa done it is a great time to explore the country with ease.

Prices are cheap for traveling this time of year. Four-star hotel rooms will cost about $120 each night. Flight prices from major US airports can drop to $850 roundtrip. These prices make it the best time of year for budget travelers to visit Brazil.

The city of São Paulo is a perfect place to experience Brazilian culture in April. With plentiful museums, theaters, and markets there are plenty of activities to fill up your stay.

May: Best Month For Wildlife Exploration

Temperatures officially begin to dip in May for Brazillian travel. The Amazon Rainforest still sees high humidity and heat this month, while the southern parts of the country can begin to have frosts. Average temperatures in the central part of the country stay between 26℃ and 17℃.

The beginning of summer in the western world leads prices to increase slightly from April. Hotel rooms in 4-star hotels are up to roughly $140 a night. Flights also bounce up to a $900 average roundtrip ticket.

As the southern hemisphere enters winter, southern Brazilian temperatures began to cool further with evenings reaching 10℃ and average highs around 25℃. Due to this variability, you can find different climates across the country.

In June, São Paulo is famous for its LGBTQ Pride Parade. As one of the biggest in the world, the streets of this city flood with colors and festivities in celebration of gay pride. It is also the oldest running pride parade in South America and has been occurring since 1997.

Overall prices can vary, but you will typically find flights just below $800 in June. Hotels can also be cheaper, with a stay in a four-star room in Rio de Janeiro costing about $120 per night. But flights to São Paulo during Pride will lily be more expensive due to the celebrations.

Winter in much of Brazil can feel like summer to many, with average high temps across the country ranging from 27℃ to 20℃. This is the coldest month of the year, with the southernmost towns experiencing 10℃.

At the peak of the off-season, there are few tourists and reasonable prices to be found in Brazil. Four-star hotels on the beach will cost around $120 per night, and flights can cost around $850  for budget airlines.

Introverted beach bums will love the coasts of Brazil in August with warm waters and low crowds abundant across the northern shores. Temperatures reach their peak around 29℃ on the coast and 25℃ inland.

Overall prices in Brazil are mild in August, with hotel rooms costing about $120 per night on the beach. In addition to this flights cost about $900 round trip.

As the final month of the dry season, September brings mild weather and vibrant wildlife. There is often snow found in the southernmost towns and warm equatorial weather in the north. Temperatures range from 19℃ to 30℃ depending on the latitude.

Prices in September are very cheap, with flights costing about $750 roundtrip when traveling from the United States. A four-star hotel room on the beach of Rio de Janeiro will cost about $110 a night.

October: Beginning of the Rainy Season

October is the official start of the rainy season in Brazil, but the temperatures are warming up and the rains are intermittent. So there is still time to enjoy the rainforest and beaches before the season takes full effect. Temperatures begin to rise with highs reaching 33℃ in the Amazon and 24℃ in São Paulo.

As a part of the shoulder season prices begin to increase for Brazilian travel. Flights can cost about $1,100 round trip from LAX. Beachfront hotel rooms cost about $130 a night in October.

This is the month to travel to Brazil if you like reasonable prices, warm weather, and great beaches. November is just before the peak season in Brazil and has temperatures hovering around 27°C around the coast.

Despite the rainy season having begun, some places will not be experiencing rain in full swing yet. With a good chance of sun and plenty of beach fun, November is great for experiencing all the beaches, rainforests, and culture Brazil has to offer at a cheaper price.

Flights to Brazil from LAX will vary based on holiday deals, but you can expect to pay $1,100 for a roundtrip ticket. Hotel rooms on the beaches of Rio de Janeiro are about $140 per night on average.

Despite the rain, Brazilians have many festivities that are sure to brighten your time in Brazil. Christmas is a very important holiday that begins with parties full of drinking and food on the night of the 24th. The town of Gramado additionally celebrates the Natal Lux Festival (Festival of Lights), which draws visitors to enjoy their illuminated masterpieces.

This is the most expensive month to visit Brazil. Hotel rooms are about $150 per night on the warm beaches of Rio de Janeiro during the Christmas season. And flight prices are at their peak, with tickets from LAX costing $1,400 roundtrip on average.

The best time to visit Brazil is between August and October to avoid crowds. This is the off-season for travel to Brazil as it is the cool winter months for the country. There are not many big activities drawing crowds this time too.

The winter season in Brazil brings dry weather, which can make it a very enjoyable time to visit the country. The is snow to be found in the south and mild temperatures on the beaches.

When Is The Rainy Season In Brazil

Most of the rain in Brazil falls between December and March. Due to the varying latitude of the country, rainfall levels differ greatly. In the northern parts of the country, the Amazon sees a lot more rain year-round than the more arid regions.

Even though it can be difficult to generalize the weather in Brazil, you can usually expect daily precipitation within these months no matter where you visit. The Brazilian weather is more mild and cool between April and October.

When Is The Warmest Month In Brazil

Brazil’s summer season is between December and March, with February being the warmest month in Brazil. The sun in the southern hemisphere is most intense around this time and humid ocean winds make for a perfect winter escape.

The temperatures vary across the large country, but heat and humidity peak in the middle of the rainy summer months. The Amazon can see temperatures around 33°C at their peak, while cities like Rio de Janeiro will see highs around 27°C.

Basic Portuguese Phrases (For Your Trip to Brazil or Portugal)

Portugal is the travel destination for travelers, a place that…

Being one of the most popular and toured cities in…

White Sands is one of the country’s newest National Parks.…

Wyoming is a state in the Mountain West region. It…

Can You Bring Protein Powder On A Plane? (Know the TSA Guidelines!)

Sticking to your diet is essential whether you’re at home,…

Best Time To Visit Mazatlán (Fun for All Members of the Family!)

Mazatlán is a resort city on the Pacific coast of…

Can You Bring CBD Gummies on a Plane? (Gummies, Oils, & Flower)

Packing and traveling can be stressful, so to cut down…

Zion National Park is among the top destination for hikers…