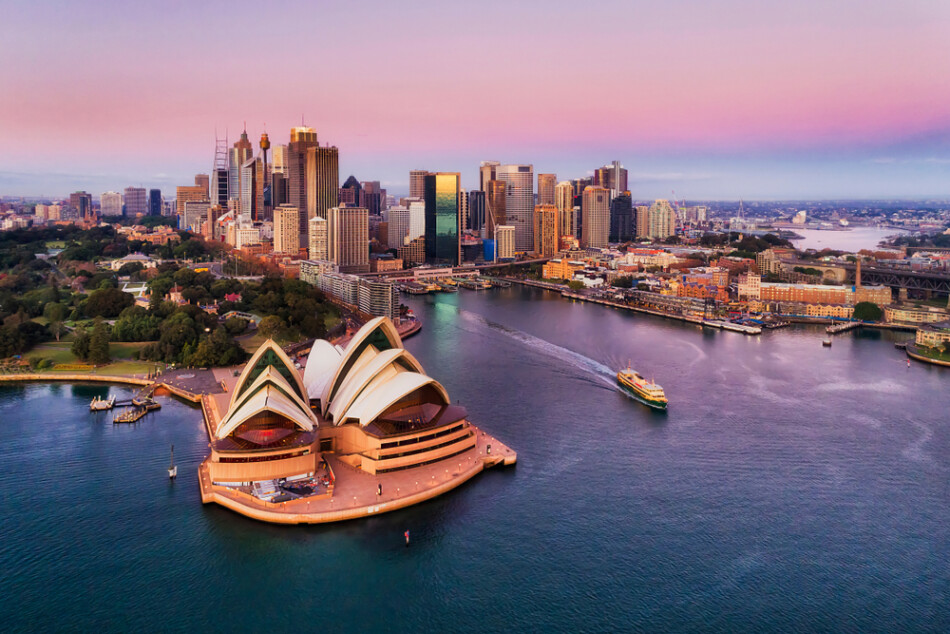 Australia is known for its spectacular wildlife, scenic beaches, and beautiful rainforests. It’s no surprise that this country enjoys a throng of tourists. If you’re already considering visiting and exploring Australia, you might wonder when is the best time to do so.

The best time to visit Australia is between April to September during the high season. The weather is reasonably mild. So, you can enjoy outdoor activities like hiking and surfing. You might want to book in advance if you plan to visit this period. Visiting between October and March is also ideal as the cities are less crowded.

You will experience several delights during unique festivals, sporting events, and adventures all year. Australia is home to the famous Australian Open. There, you can catch some of the world’s biggest tennis stars. You can explore nightlife like never before in Queensland. More so, you can experience the unknown in the Outback.

Follow along as we dive into the best time to visit Australia and some key events throughout the year.

When Should You Not Go To Australia?

There’s hardly a month when you shouldn’t visit. However, the low season (October to March) is considered the worst time to visit. It is typically less crowded. But it might be too humid for a comfortable stay.

We should also point out that most hotels and tourist attractions will be closed during this time. Floods generally occur during this period affecting some parts of the country.

Cheapest Time to Travel to Australia

The low season is also the cheapest time to visit Australia. You can get the best deals on travel fees from October to March. So, if you’re traveling on a tight budget, mark this period for visits.

Most hotels offer discounts, and you can get the best rates on food, clothing, and public parks. You can also experience unrestricted access to open tourist sites.

Every month in Australia is particularly unique. So, you can enjoy the best of different places at different times of the year.

If exploring the beach is on your bucket list, you should visit during the warmer months. This is between September to April in Southeast Queensland and New South Wales. You can also explore the beaches in Southwestern Australia from November to March.

Summer in Australia is also bushfire season. So, it is essential to get constant local alerts during your visit.

Forget everything you know about seasonal periods when it comes to Australia. The southern region of the country experiences four different seasons. They include spring (September to November), summer (December to February), fall (March to May), and winter (June to August).

If outback adventures are your thing, the cooler months between May and August are perfect. You can engage in outdoor activities in Tasmania during the warmer periods of October and March. Looking for a bit of ski action? Visit Victoria and New South Wales’s snowfields between June and early September.

We will explore more activities later in this guide.

January: Busiest Month of the Year

January, right in the middle of summer, is the busiest month for tourism in the country. It’s perfect for exploring the southern coastlines of Australia. The average temperature in Melbourne is 26°C (79°F), which makes it perfect for outdoor activities.

Take a road trip on Great Ocean Road in Victoria and slowly navigate through the border into South Australia to soak in the beautiful coastlines and explore the beaches while it’s warm.

The Australian Open holds at the end of the month in Melbourne.  Australia Day is a nationwide celebration that occurs on January 26th.

February in Australia is the best time to explore the nooks and crannies away from the crowded spots. Summer is in full swing. But the kids and teens are back in the classrooms. This leaves much room to explore all the delights of the country.

Take your time to experience all the beauties of the West Coast. You can:

You can also enjoy ever-boisterous Perth with an average temperature of 32°C (89°F).

March is the month of festivities, particularly for the city of Adelaide. It is one of South Australia’s commercial capitals. There’s a truckload of festivals lined up for the entire month. The weather is mild, with a temperature of 28°C (83°F).

The headlining event is the Adelaide Fringe – the biggest fringe festival in the entire Southern Hemisphere. You also need to take note of the WOMADelaide festival. It’s a celebration of arts, music, and culture.

The Adelaide Festival is another event you must attend if you’re in the city. If you’re a motor racing lover, you should stick around for the Adelaide 500 V8 Supercars race.

The Sydney Gay and Lesbian Mardi Gras happens on the first Saturday of the month. In Melbourne, the Australian Formula One Grand Prix brings the activities to an end.

If you happen to be in Melbourne, you can catch the biggest Anzac Day celebration at the Melbourne Cricket Ground. You can sit to watch the annual AFL match between Collingwood and Essendon. The average temperature in Melbourne is 21°C (70°F).

Anzac Day is also celebrated at the Australian War Memorial in Canberra, the country’s capital city.

Ningaloo Reef in Northwest Australia has a unique climate. It is sunny 320 days a year, blessed with warm air and a temperature of 28°C (83°F). But that’s not the reason you should visit this remote part of the country.

Whale sharks come to play on Ningaloo Reef between March and August. It also presents an opportunity to snorkel alongside these fishes. You can take a trip from the small towns of Coral Bay and Exmouth.

June: Festival of Lights at Sydney

Sydney is fun during the summer. But as the temperature slowly shifts into a frosty temperature of 18°C (64°F), you can experience a different side of Sydney. Vivid Sydney is one of the largest festivals of music, lights, and bright ideas.

The city’s landmarks during this period will be transformed into a colorful display of lights. Some of the world’s best light artists will be in the city this time of the year. They will be turning different buildings into their muse.

Sydney, during this time, attracts more than two million visitors. So, it’s a fanfare.

In July, thousands of whales escape frigid Antarctica for the warmer waters in the north. And you can get front-row seats to watch them across the East Coast.

However, there’s no better vantage point than Hervey Bay. It is located 3 hours north of Brisbane. The average temperature in Hervey Bay is 22°C (71°F). The whales aren’t the only ones moving to catch some warmth. Some Southern Australian residents swap their chilly temps for the humidity in North Queensland.

You can also use the opportunity to explore:

Alice Springs in Australia is unbearable to visit during summer (December to January). The temperature could hit 40°C and beyond. Visiting Alice Springs and other regions in Australia’s Red Centre is more pleasant this month.

The average monthly temperature is 23°C (73°F), which is ideal for exploring the scenic outback landscape.

Events include the Mindil Beach Sunset Markets and the Darwin Festival.

September: Celebration of Spring in Canberra

During winter, Canberra is off-limits to tourists because of the extreme frosty climate. However, September comes with spring and the largest flower show in the Southern Hemisphere. The average temperature of Canberra is 17°C (62°F) during this time.

You can watch more than one million blooms decorating the coastline of Lake Burley Griffin for Floriade. It’s a celebration attracting 500,000 visitors to Canberra’s Commonwealth Park every September and October.

A similar show takes place away from the city in Perth’s Kings Park and Toowoomba.

Sydney in October is warm enough to dip your legs into the many beaches along the coast and the harbor. The average temperature during this time is 23°C (73°F), perfect for outdoor activities.

Take a stroll on the breathtaking Bondi to Coogee Coastal Walk. You can catch hundreds of artworks displayed along the coastline, elevating the visual appeal and scenery of the place.

If you’re a sports fan, you can also head to New South Wales to watch the NRL grand final. It is held at the 80,000-capacity Olympic Stadium on the first Sunday of the month. The famous Bathurst 1000 V8 motor race is also held at Mount Panorama.

Melbourne jumps into action with the Spring Carnival of horse racing. It culminates in the Melbourne Cup on the first Tuesday of the month. The weather is also ideal for outdoor activities, with a temperature of 23°C (73°F).

If you love trying out different meals, stick around for Good Food Month and Taste of Melbourne throughout the month. If you are on the West Coast, attend the Margaret River Gourmet Escape.

December is the best month to explore Apple Islands, as lavender begins to sprout all over Tasmania and its capital, Hobart. The temperature sets at 20°C (69°F), mildly between heat and cold.

Hobart holds many colorful events. They include:

Hoping to celebrate New Year in Australia? Add Sydney to your bucket list and the spectacle of the fireworks.

Australia is blessed with several wildernesses and national parks with scenic hiking trails which can be explored. Some of these trails can be unbearably humid in summer. However, you’d be comfortable in locations such as the Uluru-Kata Tjuta National Park between April to September.

In places like Tasmania, summer is the best time to go hiking. The Gondwana Rainforests of Queensland and News South Wales are also comfortable for hiking in winter (June to October).

The best time to explore hiking trails in Western Australia’s Cape to Cape Track is spring (September to October) and autumn (March to May).

Australia is one of the best places to see wildlife, particularly on the East and West Coasts. Between May and November, you can spot migrating whales between these coasts in droves.

Bremer Bay in Western Australia is your best bet between January and April if you want to spot an orca on the hunt.

The best time to spot kangaroos, wombats, koalas, lorikeets, kookaburras, and cockatoos is in spring (September to November) in parks nationwide. You can take a trip to Queensland between November and January to see sea turtles nesting in their thousands.

If you’re learning how to surf, you can visit Australia anytime – as long the weather is bearable. Storms during the winter months tend to generate waves suitable for surfing.

However, you’d be more comfortable surfing in Victoria and Southwestern Australia during the summer (December to February).

Street art in Malaysia, was considered vandalism for many years,…

Indonesia is a Southeast Asian country surrounded by the Pacific…

The Mentawai Islands are a hidden gem located in West…

You may have never heard of Banka Island, it’s a…

How Strict Is JetBlue with Personal Item Size? (How Big Can It Be?)

If you travel frequently, you might have already traveled with…

How to Find Hidden Cameras in Your Airbnb or Hotel Room

You understandably need as much privacy as possible in the…

In a world that is increasingly mobile, where airline schedules…

Can You Bring A Pillow on a Plane? (TSA Rules & Regulations)

When packing for any trip, you sometimes want to pack…

Carlsbad Flower Fields is one of California’s most stunning attractions…

New Hampshire is a popular New England state and provides…