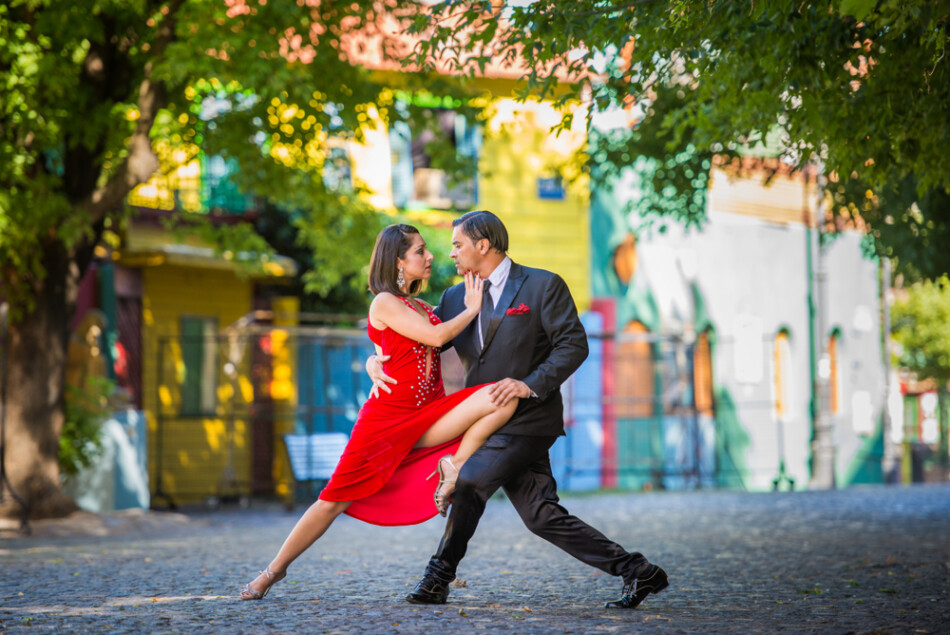 Argentina is an extremely popular vacation destination attracting over 7-million tourists each year. The country covers 1.074-million square miles of South America offering a land of varying landscapes and attractions.

The best time to visit Argentina is between April and June, when the weather fluctuates between 72 degrees and 40 degrees Fahrenheit, and travel costs decrease. You can save up to 40% on flights and accommodations. Visiting in the peak season from January through March is also popular for attending events like the Buenos Aires Carnival and Cosquín Festival.

Finding the perfect time to travel to Argentina becomes harder when you factor in the varying climates across the country. When Buenos Aires is 80℉, Ushuaia in the farthest southern region may be 50℉. Let’s take a look at the weather, attractions, and events across Argentina and figure out which time works best for you.

When Should You Not Go to Argentina?

The worst time for you to visit Argentina will depend on what region you will be traveling to. The winter months of June, July, and August are the country’s off-season. Buenos Aires has a relatively mild winter with the coldest temperatures in the low 40s.

The southernmost region of Argentina, Patagonia, may have more extreme weather conditions with lows in the high-20s and low-30s. Patagonia takes up the entire southern region of 260,000 square miles.

If you are searching for a break from the heat, January through March will have highs in the mid to high 90s. Temperatures should cool down the farther south you travel.

The cheapest time to explore Argentina is in the off-season months of June through August. Crowds are at their smallest which means the cost of airfare, lodging, attractions and more are at their lowest. You may also find some stellar vacation packages for a fraction of the cost of a trip in January.

Cheaper travel costs mean you will have to do a little more preparation than in the summer. The weather is much cooler and can be very unpredictable in Patagonia. Pack for all seasons so you’re ready for anything.

Best Time For the Weather in Argentina

The summer months of January through March are the busiest months in Argentina due to the warm and comfortable weather. Temperatures increase as you move north reaching the mid-80s in Buenos Aires.

Rainfall picks up in the summer months reaching about 5 inches each month. Fortunately the average of 8 days with rainfall remains consistent throughout the year.

Precipitation is on the higher side this time of year. Rainfall is at its highest in San Miguel de Tucumán averaging about 7 inches for the month. You should expect rain 8 to 10 days out of the month.

Take advantage of the longer daylight hours and take a beautiful hike in Patagonia’s far south and experience world-famous peaks like Torre and Fitz Roy. The Atlantic coast offers nice beaches with light to moderate crowds, even in peak season.

Gualeguaychú holds Argentina’s longest-awaited carnival in January and February. The Gualeguay Carnival is also a large cultural celebration and is the most renowned carnival in the Littoral region.

February is the heat of the peak season with the largest crowds of the year. Book flights, hotels, and events well in advance.

The weather is great for outdoor adventures! Take a hike on some of the best trails in South America and let the mist from Iguazu Falls cool you down. Tronador Glacier Refugio Frey are a couple of the most popular hikes in the country.

If you don’t mind some warm weather and humidity, Buenos Aires is fairly quiet in February as most tourists stay south. Spend your evenings searching for a hidden speakeasy or hopping to easier-to-find bars. There’s also the Buenos Aires Tango Festival, where locals perform a traditional dance in the streets.

The highs in northern and central Argentina hang out around 80℉ while the average lows are around 62℉. Southern Patagonia has highs averaging 52℉ and lows around 41℉. Rainfall across the country decreases significantly making March a nice time to visit.

Crowds begin clearing out as the shoulder season approaches. Prices for flights and hotels begin to relax, especially later in the month. Book with plenty of time to spare – we’re not quite out of the peak season yet.

The weather is just right for traveling to Mendoza for an unforgettable wine-tasting experience. Check out the vineyards in early March to join the Annual Grape Harvest Festival activities!

Holy week is observed throughout Argentina and Vía Christi Theme Park is a great place to celebrate. Or tour Tandil`s Way of the Cross for spiritual experience year-round.

April: Best Time to Take Advantage of the Shoulder Season

The gorgeous weather and small crowds make April a great shoulder season month to visit. Northern Patagonia has great options for scenic drives with multi-colored leaves.  Bariloche is a great base camp to plan your day trips!

The Buenos Aires Independent Film Festival will be happening in April but it fills up very quickly. In Villa Yacanto de Calamuchita, the Plow Disc Cooking Festival will leave you full and impressed.

May: Best Time to Explore Tigre

The average high in northern and central Argentina is 64℉ and the average low is 50℉. In the city of Ushuaia, the highs average 42℉ and the lows are around 34℉. The Easter crowds from April have cleared out so international tourism will decrease significantly.

Beautiful temperatures make for a good time walking in Buenos Aires. Just outside Buenos Aires is Tigre, where you can rent a kayak to paddle down river. If you aren’t looking for a workout, a ferry can take you to numerous waterfront bars and restaurants.

May is not the busiest month for events, but Iguazú in Concert certainly makes up for that. Every May, hundreds of Argentinian children and teens gather in Puerto Iguazú. Their concerts are incredible and attract thousands of guests.

June is a good time to find discounted travel packages that include flights, hotels, and attractions. The farther south you plan on traveling, the less your trip should cost. Keep in mind that some business in high-tourism areas may close for the season.

June 24th marks the Patagonian New Year, celebrated by locals from Argentina and Chile. More and more visitors flock to Patagonia each year to experience the New Year’s celebrations.

July is prime winter time in Argentina with highs averaging 60℉ and lows averaging 43℉. Temperatures in southern Patagonia will average 39℉ as a high and 31℉ for the low. Most of the country’s tourist attractions have emptied except for the ski resorts.

Skiing and other snow sports are very popular in Patagonia. June is the first month of skiing season for Argentina and visitors absolutely love the powder on the second tallest mountain range in the Himalayas.

San Carlos de Bariloche is popular in June for the Snow Festival. Family-friendly music and festivities is meant to spread optimism and positivity for winter.

The average high in northern and central Argentina toward the end of winter is 41℉ and the average low is 32℉. The ski resorts are still packed for a few weeks until temperatures rise.

The temperatures in northern Argentina are perfect for long days outdoors. Experience the largest waterfall system in the world, Iguazú Falls, in the Misiones Province.

Whale-watching season is hitting its peak on the Atlantic coast. Visit Peninsular Valdez and Puerto Madryn to catch mother whales and their calves as close as 20 feet away.

Highs in northern and central Argentina reach an average of 66℉ and lows average 46℉. The average highs down in Ushuaia are around 41℉ and the average low is 34℉. Keep in mind temperatures and weather conditions vary depending on the region.

If you aren’t ready for winter to end, it isn’t too late to explore Los Glaciares National Park. You can catch the remarkable glaciers and peaks while soaking in the cool crisp air.

El Calafate makes a good home base to explore Los Glaciares National Park. The quaint town is just over an hour’s drive to the national park. Hotels in El Calafate are between 70 and 100 euros per night.

Temperatures in northern and central Argentina are at a high averaging 75℉ and a low of about 55℉. Colder Ushuaia will have highs averaging 48℉ and lows averaging 37℉. Rainfall will begin picking up but not enough to severely interfere with your vacation.

The wildflowers blooming in the Lake District make for stunning photo opportunities. The Lake District is in the northwest region of Patagonia and has jagged peaks, extinct volcanoes, and crystal clear glacial lakes.

For the outdoorsmen, you’ll be happy to know Patagonia’s fishing season opens up in November. Fly fishing for brown trout is a popular pastime for a lot of anglers.

Early December makes a great time to find deals on flights, lodging, and more. The crowds grow leading to a huge Christmas and New Year’s celebration around the country.

Enjoy the summer weather by hiking some of the most pristine hiking trails in South America. The country’s varying terrain offers a myriad of biking options as well. More and more mountain bikers travel to Argentina each year.

The months between June and August are the best times to avoid crowds. The winter is the off-season for most of the country. This is not the case in parts of Patagonia where skiing is popular.

There are also some lesser-known attractions with smaller crowds than larger cities. Menhires, in Tucumán, is home to prehistoric statues built by the indigenous Tafí. Some of the carvings of men and animals weigh up to four tons.

Best Time of Year to Visit Argentina with Family

Because of the diverse cities and climates, finding the right time to bring your family to Argentina can be tricky. The summer months of December through March are the most popular times for families.

Shoulder season months such as April and May are also great family options. Travel costs could be as far as 20% lower than the summer.

Spain is one of the most popular and largest countries…

Niagara Falls is the perfect destination for any group with…

65 BEST Things to Do in Missouri (Top Venues & Activities!)

As one of the longest-running and most politically stable countries…