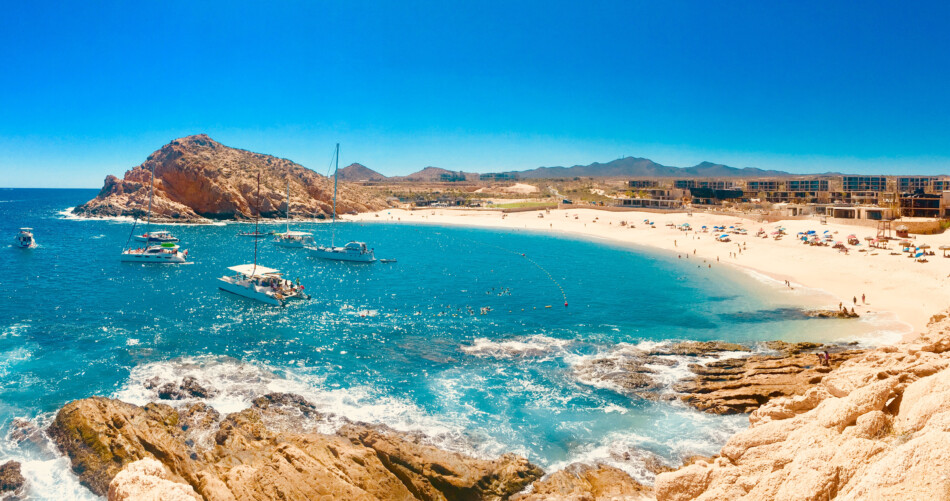 Cabo is one of the most popular destinations among families and those who are headed for spring break. You’ll be mesmerized by blue waters that will give you a filter-free, photo-worthy experience. From luxury hotels to beach adventures, there’s a little something for everyone at this vacation hot spot.

The best time to visit Cabo is from May to June. You’ll want to travel here after Spring Break, but before the rainy season begins. During these months, you can expect warm, sunny weather with amazing water temperatures. October and November are also great months to travel, but you’ll need to book in advance to save money.

Cabo is a great destination if you’re planning a family trip, or if you just need a spontaneous vacation away from the hustle and bustle of city life. Let’s dive into the best time to visit Cabo

When Should You Not Go To Cabo?

There are two times that you’ll want to not visit Cabo. The first is during the rainy season in August and September, which also poses the threat of hurricanes. The second is during March or April which is at the height of Spring Break.

September is one of the worst months to visit because of triple-digit temperatures that are especially not family-friendly. The humidity can be so unbearable that even the locals can’t stand it. Also, take note that some attractions are closed off during August and September.

These months also pose the risk of the rainy season and experiencing tropical storms and hurricanes. If you’re planning a family trip, you’ll also not want to visit Cabo when the Spring Breakers are in town. Many of these resorts will turn into the party area, which is not ideal for small children.

What Is The Cheapest Month To Go To Cabo?

The hotter months in Cabo typically mean you’re going to find better rates on both hotel and airfare.

If you book your vacation during the late spring and summer months, this will help snag lower prices and to save you money on your trip. You can find flights to Cabo for $400 or less when you travel during this time.

When planning your trip to Cabo, traveling between May and June might be your best bet when planning on a budget. When you book early, you can benefit from a wide range of discounts. Some budget-friendly activities you can plan for your vacation are whale tours, taco buffets, strolling the art walk, visiting the beach, and exploring Land’s End.

Hotel rooms start at $30 per night in Cabo during this time. We recommend booking your trip at least three months in advance. Check a variety of booking sites to get alternatives and to compare the best possible pricing.

What Time of Year is the Best Weather in Cabo?

Of course, when you take a vacation to Cabo you want to go when the weather is ideal. Below, we discuss the weather by month so that you can choose the best month to go for you and your family.

Temperatures average around 80 degrees during January in Cabo. It is the perfect temperature for sunbathing so you’ll want to make sure you pack those swim essentials. It is still warm and has humidity of around 64%. As for rainfall, it only rains for around 2 days in January, so you may want to pack a cooler outfit.

Feast Day is the patron saint of animals. On this day you’re allowed to bring animals into churches to receive a blessing. Many people participate in Feast Day by dressing their pets up in different outfits to become blessed.

Temperatures average 81 degrees during February in Cabo. Cabo also experienced almost constant cloud cover in this month, with most of the percentage being overcast. As for rainfall, February starts with a 4% chance of rain and ends with a 1% chance of rain.

Cabo’s humidity averages 64% during the month of February. Although the weather may be quite warm, the weather can take a quick turn in the winter. You’ll want to pack your swim essentials and a light sweater or jacket for the night time.

Temperatures average 84 degrees during March in Cabo. The month of March experiences increasing cloud cover. The lowest chance of overcast is on March 4th.

The rainfall percentages remains at 1% during the entire month of March. As for humidity, March is the least humid month in Cabo. If you’re traveling during this month, you’ll want to pack swim essentials, shorts, t-shirts, light linen shirts, sundresses, and sandals.

The Festival of San Jose is an eleven-day festival that honors the city’s patron saint. You’ll get to partake in great music, parties, parades, carnivals, and rodeos during the weekends. You’ll get to eat amazing food from food vendors and dance the night away.

Cabo experiences 63% humidity during the month of April. When packing, pack your swim essentials, a light jacket, sundresses, and a pair of jeans just in case by the off chance it becomes windy.

During the summer months the weather becomes warm and sticky, so you’ll want to pack items that are lightweight. A light pair of shorts, tank top, and sandals are must-have items. For cooler nights, pack a sweater or light jacket.

Related Read: Do You Tip at All-Inclusive Resorts?

Temperatures average 93 degrees during June in Cabo. Clouds begin to increase again during the month of June, with the clearest day being June 7th. Rainfall begins to increase during the early summer months and the average humidity increases to 65%.

If you’re traveling during this month, you’ll want to pack swim essentials, sunscreen, a hat, sundresses, shorts, t-shirts, and sandals. At Los Cabos Open of Surf, you’ll be able to watch some of the most experienced surfers take on the ways of Mexico.

For the month of July due to warmer temperatures, you’ll want to pack swim essentials and lightweight outfits. The Festival of St. James honors a patron who brought Catholicism to Mexico. You’ll see him in different artworks riding a white horse. This festival has a parade and re-enacts battles.

Temperatures average 94 degrees during August in Cabo. Cloud cover begins to rapidly increase during this month with the cloudiest day being on August 22nd. The entire months experiences around over two inches of rainfall with humidity averaging around 70%.

August is one of the warmest months in Cabo so you’ll want to pack plenty of lightweight items that include swim essentials, sun protection, lightweight outfits, dresses, and even a fancy outfit for a night out. Los Cabos Open is one of Cabo’s popular men’s tennis competitions.

Temperatures average 92 degrees during September in Cabo. Cloud cover decreases during this month with the clearest day being September 30th. Rainfall for this time period is around two and a half inches and the humidity increases dramatically all the way up to 93%.

Since rain begins to increase this month, you’ll want to pack a poncho, light jacket, swim essentials, and other lightweight clothing. Beginning in mid-September, Cabo throws a party for Mexican Independence Day. You’ll be able to check out Mariachi, great drinks, fireworks, and a lot of delicious street food.

Temperatures average 92 degrees during October in Cabo. During this month, Cabo experiences decreasing cloud cover with the cloudiest day being on October 19th. Rainfall begins to decrease and the average humidity rapidly decreased from 93% to 49%. You’ll want to pack swim essentials, lightweight outfits, and cooler outfits for night.

Temperatures average 87 degrees during November in Cabo. Cloud cover for this month increases from 34% to 43%. There is little no rainfall during the month of November as rainy season has just ended.

The average humidity in Cabo is 67% during the month of November. Since you’re about to enter the winter season, you’ll want to pack swim essentials, a light jacket or sweater, closed toe shoes, sandals, shorts, t-shirts, pants, and dresses. The weather is very unpredictable during these months so it’s best to pack for every type of weather scenario.

Temperatures average 81 degrees during December in Cabo. December experiences increasing cloud cover with the cloudiest day being December 18th. This month also goes through an increase in rainfall from 4% to 6%.

The average humidity during the month of December in Cabo averages 67%. December is a part of Cabo’s winter season. Night time can become chilly so you’ll want to pack a pair of pants and jacket in addition to your summer essentials.

The best time to visit Cabo with family is after spring break, which is from May to July. You can find family-friendly activities in Los Cabos that the entire family will enjoy and that are budget-friendly. The ages of your kids will depend on what Cabo will have to offer.

If you have small children, the fewer activities you’ll be able to participate in. For school-age kids, there are clubs they can participate in. Some activities that the family can enjoy are snorkeling, kayaking, zip-lining, and going to the beach.

The best time to visit Cabo to avoid crowds is during the rainy season in August and September. These months have very few sunny days.

When Is Hurricane Season In Cabo?

Cabo is one of the most sought destinations thanks to its nightlife and warm, sunny beaches. Hurricane season in Cabo is most active during August through October. If you are planning to travel during hurricane season, it wouldn’t hurt to purchase travel insurance just in case your trip becomes impacted by a storm.

One of the advantages of traveling during hurricane season is that the hotels see less occupancy during these times. If you do happen to be traveling when a hurricane hits, make sure you listen to the hotel staff on rules to follow for safety.

20 Best All-Inclusive Resorts in Cabo San Lucas (For All Ages!)

White sand beaches, the tranquil sea of Cortez, and decadent…

Do You Tip at All-Inclusive Resorts? (In Mexico? Jamaica?)

All-inclusive resorts are a coveted luxury that every traveler must…

Mexico is home to some of the most remarkable beaches…

Beach days conjure up lazy afternoons soaking up the sunshine…

Istanbul is Turkey’s largest seaport city. It is partly located…

Dubai has evolved over the years to become one of…

New Mexico is a state that has something for everyone.…