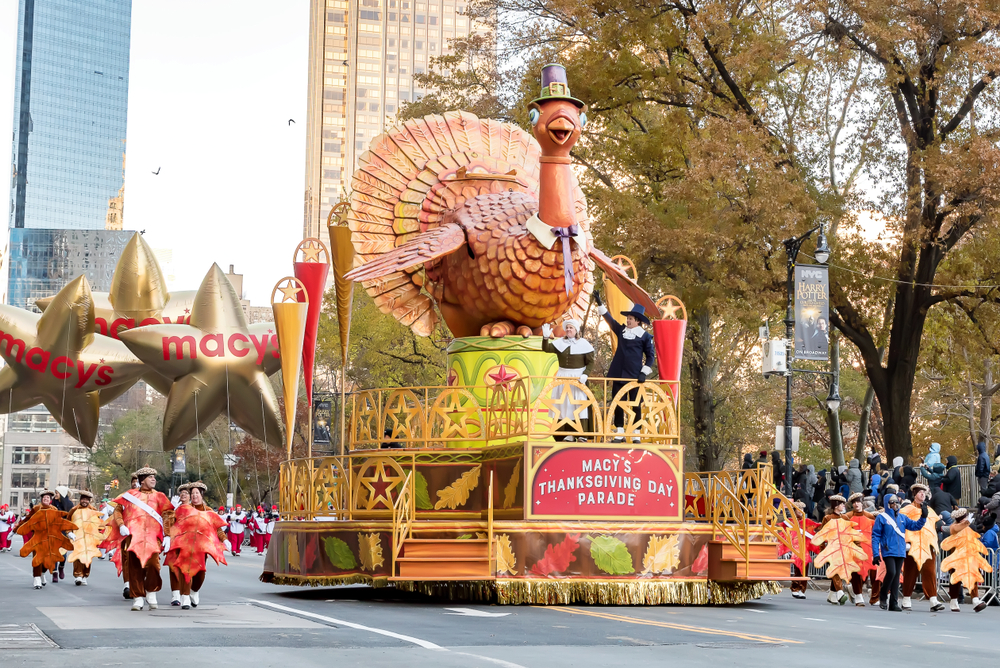 Parades have always been an iconic staple of any big celebration or festival, the dancers, the confetti, the colorful floats they really create an atmosphere in the city.

In North america popular parades range from Thanksgiving parades to St Patricks day and of course Mardi Gras! Many of these Parades are completely FREE and can make a great day out with the family. Here is our list of the top parades in the U.S.A:

St. Paddy’s Day began as a religious celebration in the 17th century to commemorate the life of Saint Patrick and the arrival of Christianity in Ireland. It was originally a “Feast Day” but has now turned into more of a “Drinking Day” with Guinness being the staple product.

The Parade takes place on the anniversary of Patricks death which was believed to be March 17, 461 AD.

What is the largest St Patricks Parade in the U.S.A?

San Francisco has a vibrant Chinese community, it has hosted this Chinese new year celebration since the 1860s and is an extravaganza of asian culture. Here you will find an colorful pleathora of floats, firecrackers, sparkled costumes and of course the signature Chinese dragons!

The Chinese new year parade is watched by over 4 million people all over the world!

Related Read: 30 Romantic Things To Do In Washington, DC

When is the Chinese New Year Parade?

The Rose Parade hosed by the Tournament of roses is an annual parade held on New Years Day, at 8:00 a.m. Pacific Time (UTC–8).  The rose parade attracts hundreds of thousands of people watching in person and millions more on the television. 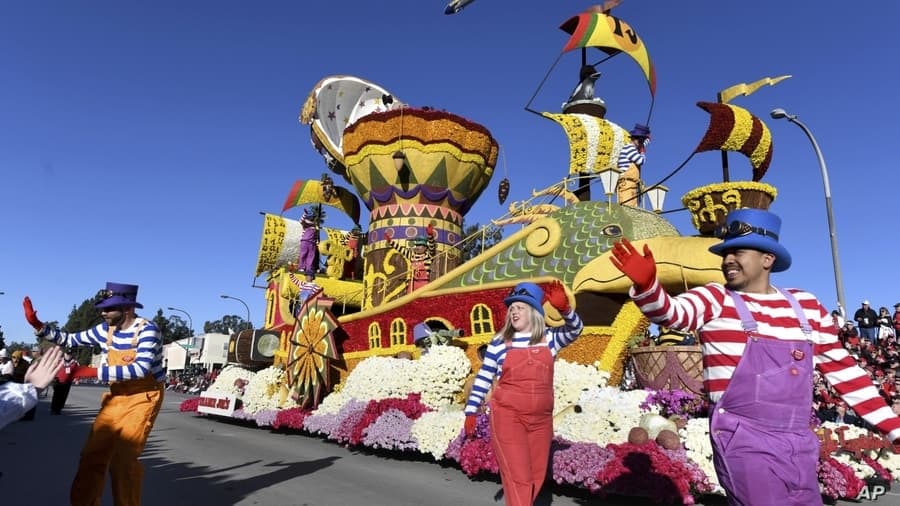 The Rose Bowl Football game is on ESPN, while the parade is streamed on the major networks.

History of the Rose Parade:

Fun Fact: The Rose Parade has been running since 1890 uninterrupted despite 2 world wars!

The Philadelphia Mummers Parade  is a unique New Years Day celebration which has been occurring on the streets of Philadelphia since the 1800s & the tradition even stems from earlier European traditions.

Thanksgiving Day is a special holiday in America which is on the fourth Thursday of every November. On this day, Americans give thanks for the blessings of the previous year. Staples at Thanksgiving include a large turkey for dinner and of course the thanks giving parade just before!

At the Thanks giving parade you will find a friendly atmosphere with marching bands, festive floats and gigantic colorful balloons.

What is the largest Thanks giving parade in the U.S.A?

The Largest Thanks giving parade in the U.S.A is held in New York, the macys thanks giving parade. Over three million spectators come to witness the parade while over 50 million people watch the parade on television.  Popular balloons at the parade include ones of giant cartoon characters such as Snoopy, sponge bob and Kermit the frog.

Where does the New York Thanks Giving Parade start?

The parade starts at 77th Street and Central Park and heads through the Upper West Side before ending at 34th Street and 7th Avenue.

Other Notable Thanksgiving Parades in the U.S.A:

The 4th July marks the anniversary of the signing of the Declaration of Independence.

This is one of the most popular celebrations of the U.S calendar, with highlights includes a spectacular fireworks display, family barbecues and baseball games.

Fun Fact: the 4th July celebration in 2019 marked the 243rd anniversary of the founding of the U.S.A

Where is the largest 4th of July parade?

The largest 4th July parade in the U.S.A is held in California. The Alameda 4th of July Parade is one of the largest and longest in america.  The Alameda Parade includes over 170 floats and 2,500 participants!

Where is the best place to watch July 4th fireworks?

The best place to watch the 4th July fireworks is in New York city:

What is the oldest parade in the U.S.A?

The oldest parade in the U.S.A is the Bristol Fourth of July Parade, (known as the Military, Civic and Firemen’s Parade), founded in 1785, is a nationally known Fourth of July parade in Bristol, Rhode Island. The parade is part of the oldest Fourth of July celebration in the United States of America.

A Winter tradition, which began from a 19th century newspaper complaint which said the city was “Unliveable during the winter!”.

This is now the United States largest & oldest winter festival, with a winter magic parade which is lit by torches. The parade is free to attend!

Another winter parade, which is so much warmer is this the Seminole Hard Rock Winterfest Boat Parade in South Florida.

Here you will find over 100 hundred “boat floats” lit up and decorated in a unique way. An estimated one million spectators came to see the parade last year as it made its way down the New River.

The winterfest parade has been running for over 40 years and has sparked alot of other winter sun events nearby.

New York City is a diverse, open city so you might have guessed the New York City LGBT Pride Parade is one of the largest in the world! Each year the pride parade offers tens of thousands of participants and millions of sidewalk spectators!

At the Pride Parade you will find a series of colorful floats, costumes and plenty of confetti! Last years parade saw host Whoopi Goldberg and performances by Cyndi Lauper and Ciara! The parade runs annually June 30th, with many events leading up to it from the 1st June.

Depending upon which president has been elected….hundreds of thousands of people attend the public ceremony, to Inaugurate the next president.

At the parade you will get to see marching bands, honor guards, military and witness an historical moment in American politics.

Many media outlets reported Donald Trump had ordered photos of his inauguration to be doctored to look like there was more people! Whether this is true or not, they are definitely iconic parades to attend.

Mardi Gras is one of the most famous parades in the U.S.A. In fact new Orleans doesn’t have one parade but multiple parades.

What is Mardi Gras a celebration of?

Mardi Gras is French for “Fat Tuesday”, it reflects the practice of the last night of eating rich, fatty foods before the ritual fasting of the Lenten season.

When did Mardi Gras Start?

It began in 1699 when French explorers Pierre Le Moyne d’Iberville and Sieur de Bienville landed about 60 miles south of present-day New Orleans. But the celebration actually stems to medieval times.

It was a popular Catholic Holiday on Shrove Tuesday, but is now celebrated by all christians and almost everybody in New Orleans! let the good times roll!

Washington D.C, has 3000 beautiful Cherry Blossom trees which were gifted back in 1912 by the Mayor of Tokyo, Japan (Yukio Ozaki). The trees were a statement of peace and friendship between the two nations.

Since that time the Cherry Blossom Festival celebrates their blossom with a parade & kite festival on the 13 April.

How much is the Cherry Blossom Festival Parade?

The  Cherry Blossom Festival Parade is FREE to stand and watch. However, you can book a grandstand seat for $20 online.

Have you got everything you need??

Check out our  Travel Essentials .  (Things You can’t travel without!)

Wish to Book a trip?

To get the best hotel prices check out:  Hotel Deal Secrets!

Whether you’re a native New Yorker or are just visiting…

There are so many reasons to book a trip to…

New Orleans is among the most popular vacation destinations in…

30 Romantic Things To Do In Washington, DC (Food, Museums, & Hotels)

Washington, D.C. is the ultimate destination for a sophisticated yet…

Park City, Utah, is an outdoor and nature lover’s dream…

Thanks to its booming arts scene, elite sports teams, and…

10 Best Hiking Trails in Fort Worth (for Walking & Biking)

The beauty of Fort Worth’s mild climate is the opportunity…

Do’s and Don’ts in Vietnam – Vietnam is one of…

10 Epic Ranch Holidays in the U.S.A

Best Ranch Holidays in the U.S.A – Do you ever…