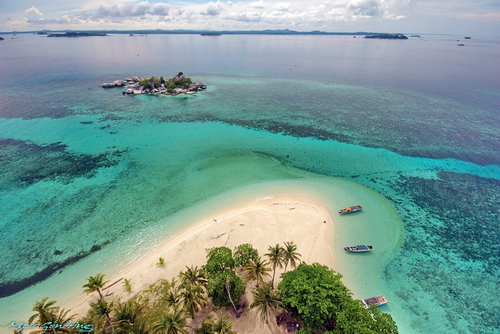 You may have never heard of Banka Island, it’s a secret paradise which lies to the east of Sumatra Island  and does not get the same recognition as places like Lombok or Bali. Is it worth visiting?

Even better as the world is yet to know about this place it still attracts relatively few tourists compared to places like Bali. So expect lower prices, (in fact most things to do are free!) and an island paradise to yourself.

How to travel to Bangka Island?

The best way to get to Bangka is to fly from Jakarta to Bangka Islands Capital (Pangkal Pinang). There are various airlines flying this route, the most popular ones seem to be Garuda Indonesia and Lion Air. A return ticket will cost you approximately $100.

There is also a few flights from Palembang  to Pangkal Pinang, so you can check this out if you in a pinch.  The Main airport in Pangkal Pinang is Depati Amir Airport

You can also catch a ferry to Bangka Island. There are very long overnight ferries from Palembang to Mentor, which take approximately 11 hours. This is long but it’s also very cheap if your on a tight budget.

If you would prefer to save time, I would recommended the Bahari Express hydrofoil, this runs many times per day and is just a 3 hour trip.

Getting around Banka Island?

Bangka is a large island, with well kept roads. However, it does not have very good public transportation system! So i suggest renting a car as the best way to get around…this also gives you lots of freedom to explore the island.

Renting a Car or Motorcycle?

Map of Bangka Island: Things to do

Dive into our map below to help you find the places to visit, including beaches, lakes, temples and even places to eat!

DIVE INTO OUR MAP! User Guide:  Simply Click the +/- buttons to zoom in & out,  Click on a favourite attraction, and click directions symbol to give you the driving or walking route directly there!

Webmasters: If you own a website, feel free to embed our map to help your readers, just remember to credit us at; www.townandtourist.com/attractions/bangka-island

Things to do on Bangka Island:

Secluded Beaches, shimmers Lakes and historic Temples are abundant on the island. With less tourists, you will have the whole place to yourself.

There are lots of beaches in Bangka but I would say for the best beaches you have to drive a little further out. For example, Rambak Beach is close to the city & free entry but it’s not amazing…its just nice.

My favourite beach is Penyusuk Beach this is a real beauty!it takes around 2 hours one way or 4 hours for a round trio.  It was also very secluded and wasn’t crowded at all.

Parai Tenggiri Beach offers white sands and a secluded atmosphere with very few people around. There is also some rocks nearby you can climb on. The sea isn’t the best though, its not crystal clear like other places…also alot of small rocks on entry.

Romodong Beach is a secluded beach area with clear waters and is characterised by two large rocks guarding the area.

The unique thing about this beach is you can observe one side being very calm while the other side has waves crashing to the shore!

Take a short boat ride out to Ketawai island for Pristine beaches and a true tropical paradise.

On the weekends you can find live entertainment, and even a mini zoo.

There are a couple of lakes on Bangka island which used to be mines but are now abandoned. One is called red hill, which you can find here. The other is a true paradise called Kaolin Air Bara Lake located here.

Many call Kaolin Lake the Bluest lake in Indonesia. This is an instagrammable spot!

Why is the lake so blue?

Kaolin Lake is not a natural lake. It used to be a mine for Kaolin, a mineral which is used in the production of cosmetics, porcelain and ceramics. Kaolin mining was great for the people of Bangka island as they have jobs from the industry.

However, since then the mining stopped and the lake was abandoned. There is a white coating of minerals at the bottom of the lake which causes the sunlight to reflect and the shimmering blue color to appear.

Although the magical blue waters will make you feel like diving in, the government urges those not to due to the dangerous chemicals which could still be in the lake from the mining.

Top Tip: Head here during midday to see the bluest shimmer of the lake and capture some instagrammable photos! Be sure to wear sunscreen/sunglasses and a hat though as it can get real hot this time of day.

The are a few small vendors where you can buy water/snacks but i would suggest bringing water with you, especially if its a hot day.

This is a quaint fishermen village located around 20km away from Pangkal Pinang in the Koba District. Walking around the locals are friendly and love to chat, you can watch them work on there craft and even buy fresh fish from them.

These are perhaps some of the strangest looking rocks you will ever see! When we wen’t there some locals were abseiling down them for some tour company. There was also a local vendor selling fermented shrimp.

Gold Bridge Bangka is one of the very few bridges in Indonesia which can open to let ship pass through. Interesting bridge to drive over.

Bhayangkara Park is a neon light lit park which is a cool place hang out with friends, take a bike ride or walk. It’s not too far from the airport.

If you would like to explore the spiritual side of Bangka then you should head to one of it’s many temples.

Gua Maria, offers a unique experience to see a christian site nestled with the Jungle close to Belinyu town in the north of Bangka island. There is three crosses, one with Jesus on and even a cave housing the virgin Mary.

Head to Pangkalpinang city for a historic pleathora of traditional temples and a vibrant shopping area.

An peaceful colorful temple which faces the sea, when i went here it was completely open to the public. With no fence, signs or anybody else around…its a nice place to relax or even do some prayer.

An orange hindu temple with Ganesha Statue. The Hindu temple is located around 300m from The Sea Goddess Temple (Klenteng Dewi Laut) near Pasir Padi beach.

The Temple was locked when i went to visit, but still worth a quick visit after the Sea goddess temple.

Where to Eat in Bangka?

After visiting all those temples you must be hungry. I suggest heading down to the historic Warung Kopi Tung Tau, which first opened in 1938. They offer local traditional dishes with a modern twist. There is two branches you can visit one Pangkalpinang and Sungaliat.

Aroma Laut Restaurant is a small restaurant which offers fresh seafood, with boat decor all around you will feel like your floating water!

Otak Otak Ase has branches all over Bangka Island including at the airport. Try the famous Indonesian fish cake “Otak” while waiting for your flight.  You should also get some local kerupuk (crackers) as a souvenir.

Where to Stay on Bangka Island?

The most modern hotels are in the capital city of Pangkal Pinang. These include Novotel Bangka Convention Centre and Menumbing Heritage Hotel.

Bangka island does not really have luxury resorts  the closest you will find is places like    Tanjung Persona Beach and Grand Parai Resort.

Jakarta, Indonesia: Is it worth Visiting?

Floating Breakfast in Bali: 10 Resorts to try it!

15 Best Hiking Trails in Palos Verdes, CA (For All Levels)

California is known for its warmer weather and beautiful ocean…

Arkansas is home to the magnificent Ozark Mountains, the Buffalo…

The state of Georgia is most commonly recognized for its…

Antarctica and the North Pole at polar opposites of the…

Camping in Sedona is a unique experience because to the…