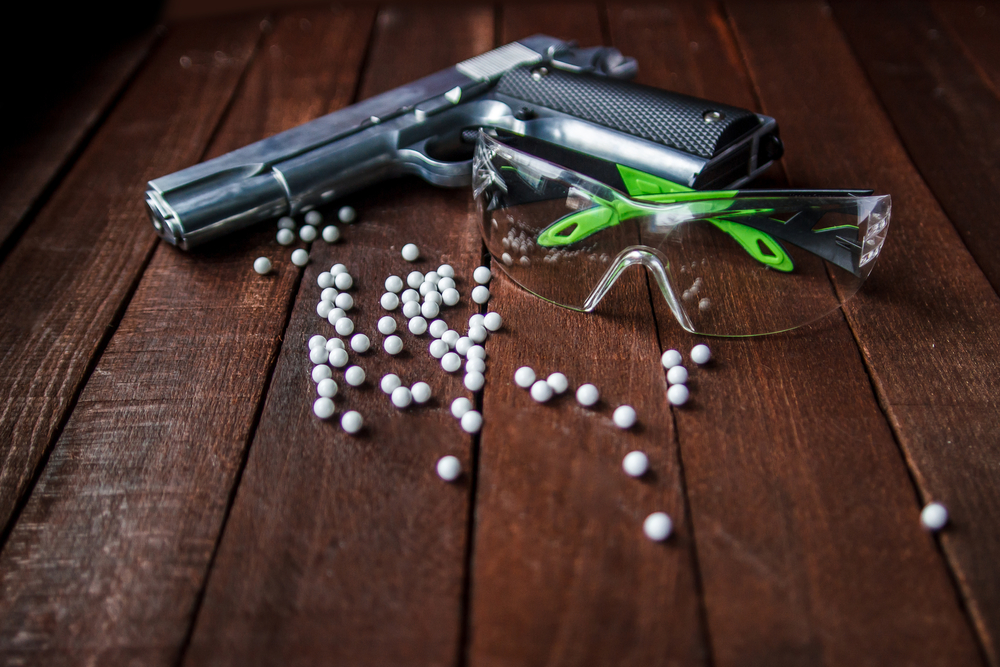 Calling all Airsoft Enthusiasts, What are the Security Guidelines for flying with your airsoft weapons/firearms? Also toy guns, replica weapons and even war memorabilia ..what exactly are the airline rules for flying with these.

After a recent trip from the United States to the Jamaica via Delta airlines with a simple Airsoft gun,  i ran into a few issues which wasn’t fun! Upon returning to the U.K, I was discussing my issues with a friend who had during the recent 100th anniversary of world war one attempted to bring back to the U.K, war memorabilia and deactivated weapons.

So after much deliberation I decided to investigate the clear rules for flying & imported with these types of weapons as they are not real at the end of the day! So as you might of guessed the rules differ per airline and each country has variations!

According to NJ news,

“Federal authorities found a fake grenade, pellets and other items that a passenger attempted to bring through a security checkpoint at Newark Liberty International Airport on Saturday.

The man, bound for Heathrow Airport in London, voluntarily abandoned the Airsoft grenade and accessories around 5 p.m. when Transportation Security Administration agents discovered them.

He was allowed to board his flight because it is not illegal to possess a replica grenade, the spokeswoman said. “

So he’s luckily he didn’t get fined, however he lost his expensive kit! So follow our tips below to avoid this happening to you!

If traveling to or from the United States or flying domestically TSA (Transport and Security Administration) is your go to guide! A federal agency created after the September 11th attacks, there main goal is to govern the Security of the united states.

So what do they have to say about Airsoft Guns & Replicas?

Bob Burns from the TSA Explains:

For those of you not familiar with Airsoft, it’s an activity similar to paintball, but the guns shoot plastic pellets. While the guns don’t fire real bullets, they look alarmingly realistic.

Most of the guns have orange tips on the muzzles, but on the X-ray screen, they look like the real deal and will cause an incident and delay you and your fellow passengers!

They’re also prohibited from the aircraft because they’re considered a realistic replica and would likely cause panic and commotion if seen on a plane.

Like paintball guns, Airsoft guns are perfectly fine to transport in your checked baggage, and as with BB and pellet guns, there is no need to declare them as you would a real firearm.

There are also Airsoft grenades and mortars that look realistic! These are not OK in carry-on or checked baggage. Keep in mind that if your gun uses compressed gas cartridges, those are prohibited as well. CO2 cartridges are only permitted with life vests and mechanical limbs.

Related Read: Can You Bring A Taser On A Plane?

There are also a series of additional requirements the TSA States should be followed:

Black Powder or Percussion Caps in Carry on luggage?

If you forget to follow the rules? Civil Penalties & Prosecution:

The TSA and other authorities strictly enforce these regulations. Violations can result in criminal prosecution and civil penalties of up to $10,000 per violation.

Related Read: Can You Bring A Flashlight On A Plane?

To play it safe before Traveling you should contact your airline as may have their own additional policies regarding replica firearms and amount of ammunition etc.

If you are traveling internationally, please check with the authorities at your destination about their requirements.

Exceptions to the Airline Rules:Rout

An Airsoft hobbyist named Freddie, who flew from the US (JFK) to the Dominican Republic (SDQ) via Delta Airlines, in 2016. Here is his story:

Firstly what he took with him while flying:

In my carry-on baggage.

“That’s about it for the gear I took. I know it’s a lot, but in the DR shipping rates are exorbitant, and it’s a lot cheaper to buy in the US and just take it with me. I was forced to distribute items across certain bags because of weight restrictions.” – Says Freddie.

What happened at the Airport?

” I arrived at the airport and at Baggage Drop, I told the lady I’d be checking in an airsoft gun. She did not know what it was so I just said it’s a replica firearm. She seemed not to mind, and even surprised that I wouldn’t be taking it Carry-on, but I knew the rules and I had her ask someone else. And yup, local Port Authority police had to inspect it and it would have to be cleared for flight and checked as a firearm. Had I listened to the first lady, my gun would probably have been confiscated.

She then prompted me to the Delta Kiosk assistance area, where a much nicer lady explained what I had to do. A Port authority police officer would have to clear it for flight, I’d have to fill out a firearm unloaded tag, and I’d have to pay the 2nd checked luggage fee ($40 dollars) and I’d be all good.

So this nice gentleman came up after she called the cops, opened my case and examined everything. He was an airsoft player himself (awesome) and knew what he was dealing with. He had me open the case right then and there, (I got tons of looks from the people who were in line), he then deemed it safe for flying, and walked with me to TSA, at TSA they took his badge number and name, and sent me on my way.

The source of this case study is from an Airsoft hobbyist named Freddie (all credit to him) on a Reddit forum.

Flying Into the U.K with a BB gun/Airsoft, toy,Replica gun.

As most commonly thought the U.K has a few more policies than the U.S.A where people try to transport real guns on occasion. To bring the bb gun/Airsoft into the UK as it is, will require you, the owner, to have a valid defence as prescribed under the VCRA (Violent Crime Reduction Act) to demonstrate that you will use the Replica Imitation RIF in a safe manner.

Related Read: How Many Fluid Ounces Can You Carry On A Plane?

1) a UKARA REGISTRATION is the easiest way to obtain a defence.

2) There are other defences, which might be worth looking into, you can read the particular part of the VCRA HERE and the amendment HERE. On the second link, search for the word Airsoft and you will find what you need.

3) Paint the Gun – If you can paint the gun so that it appears unrealistic you can import it as an IF provided that you are 18 or older. Paint something which isn’t covered when you hold the replica, and use a bright eye catching colour which doesn’t incorporate any camouflage!

As for the Airline, they may well be a little nervous about allowing an imitation firearm onto an aircraft, but after explaining what you intend to do well ahead of time, and transporting the RIF safely should sort all that out.

Practicalities of Travel with Airsoft:

Following similar rules to TSA explained previously should help you to avoid any issues.

Detail what you would like in your checked luggage and hand luggage. (better to put all in checked to be on the safe side.

Keep a note in the case that explains exactly what , that it is incapable of handling or discharging any form of ammunition other than lightweight BBs. Put your UKARA details in there as well, including Name, Full Address, UKARA number.

Word of caution when flying with an Airsoft firearm:

Don’t use the word “Gun” “Firearm” or “Weapon” at the airport, whilst you’re carrying a gun bag or gun case. Also DO NOT remove it from the case. If the check in clerk or security ask to see it, explain that it is an RIF and that you should take it to a private room first.

Your best bet is to follow the above guidelines for the U.S.A and U.K, Locked case, Declare and Check in etc. Then you shouldn’t go far wrong. But make sure you check with the airline before hand to clairfy any differences. State that you are following U.S. , T.S.A rules and U.K rules and that are there any differences.
If possible, try to pack everything in your checked in bag and you shouldn’t have any worries.

Flying with Airsoft, Replica Firearms or even War Memorabilia:

Common Sense is the key when traveling with airsoft guns it isn’t usually difficult. Just follow the above rules, Declare, check with airport check in staff without causing alarm and you should be fine! The same rules apply for war memorabilia as long as deactivated (With evidence), Movie Prop Weapons and any other imitation firearm.

Our Town and Tourist, five golden tips are:

(Courtesy of our Town and Tourist Airsoft Enthusiasts) .

For imports and shipping from other countries and places like China the same procedure should be followed with clear import documentation and any data sheets stating exactly what it is, the fact its inactive its purpose (Antique) , Safety Clearance and contact number, address for yourself to answer any further questions.

Trending Articles for you…

Best place to sit on a plane to avoid turbulence and motion sickness.

The Best places to visit in Northern India.

Why you should visit Ethiopia in 2019?

Can You Bring A Flashlight On A Plane? (Tactical & Regular)

You may find yourself packing all the essentials for travel…

Can You Bring A Taser On A Plane? (Rules By Airlines & TSA)

When packing for a flight people usually pack their essentials…

Many airlines have size restrictions for personal items and carry-on…

Can You Bring a Speaker on a Plane? (Bluetooth Speaker & Subwoofer)

There are various things you may want to pack with…

Can You Bring Deodorant on a Plane? (TSA Rules & Regulations!)

Going on a vacation can be so exciting, but packing…

TSA is short for the Transportation Security Administration, the US…

How Strict Is Alaska Airlines With A Carry-On? (Size or Weight?)

Whether you’re going on an extended vacation or a short…

How Strict Is JetBlue with Personal Item Size? (How Big Can It Be?)

If you travel frequently, you might have already traveled with…

Can You Bring Cigarettes on a Plane? (TSA Rules & Regulations!)

It may be hard to believe, but back in the…